Wish there was OpenHab integration for Frigate too 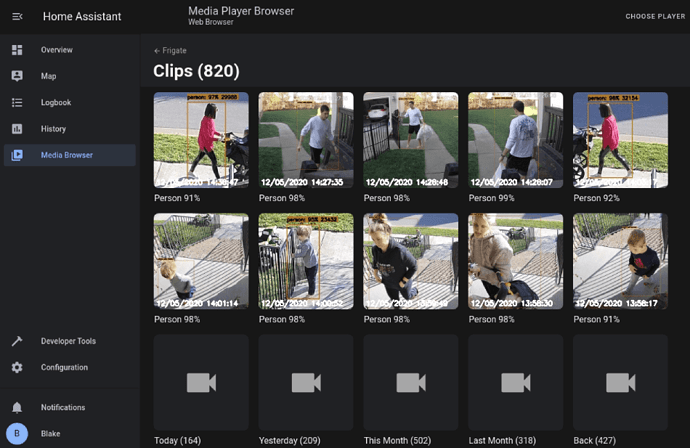 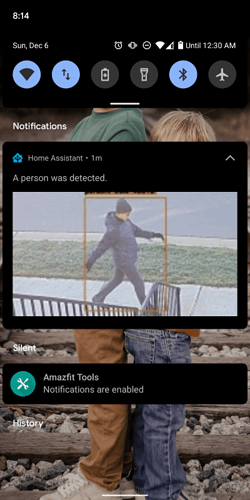 Love how they integrated it into HomeAssistant… OpenHab deserves something like this too.

Love how they integrated it into HomeAssistant… OpenHab deserves something like this too.

I don’t know, how it is integrated into HA (and I don’t use it), but it offers two ways, which are "easily

A web server is available on port 5000 with the following endpoints.

These are the MQTT messages generated by Frigate. The default topic_prefix is frigate, but can be changed in the config file.

from the looks of it, there’s not so much endpoints/attributes, so just give it a try

What did you want to do in particular?

I created a history widget for habpanel and am yet to re-create it for OH3 but it gave some similar features. Just need people to jump on getting some widgets made.

You can install any 3rd party app like shinobi/zoneminder/blue iris and get far more features and you can even place a link on OH3’s ‘other apps’ icon to launch the UI of shinobi.

Telegram can be used to send full mp4 videos with audio to your mobile phone like your second picture shows.

Pushover can send animated GIFs that move that display on your phones screen without needing to be unlocked.

With either Telegram or pushover you then get a full event history that is not stored on your local network. I see this as a plus as if someone steals your electronics they don’t steal the NVR with all the footage.

All depends what features you are after and many people will have the opinion that a heavy resource using application is best kept separate from openHAB and there is merit in this if the data from lots of cameras makes your other devices have bigger latency.

I already use XMPP integration so could quite easily link that into Frigate via its MQTT integration. I guess I was coming from the perspective that openhab phone app could do the image notifications.

I never really understood the whole ‘too big/resource hungry’ argument thrown around, surely it is always going to be a case of ‘this is a resource hungry addon etc, don’t expect miracles on low-end/low-power hardware’. The option of flexibility and power should always be an option for the end-user, rather than a blanket for example ‘if it slows down things for raspberry-pi folks then its a bad idea’…

I seem to notice a lot of this closed-fence approach on github posts too, ie… ‘dont do this or that because it opens up security issues’, I just totally disagree, surely it is simply a case of ‘there are caveats, with great power comes great responsibility’, rather than a blanket disable of features just because it potentially could be used incorrectly by a beginner or security-blind individual.

The power of OpenHab has always been the flexibility to give techies a truly powerful open platform to work with, not to lock and limit it to cater for a larger basic crowd, for that I’ve always felt other platforms exist, OH I’ve always considered to be the engineer brave dad in the crowd, not the ‘hold my hand’ nanny dad with 8 foot fencing and bungee safety-cords.

I agree with you up to a point and I run cameras directly into openHAB 3 with no other software, great to have the choice how you want to set up your system.

The option of flexibility and power should always be an option for the end-user, rather than a blanket for example ‘if it slows down things for raspberry-pi folks then its a bad idea’…

Sadly it is not just for PI users. One example that would apply with even a monster of a machine is if you have a lot of camera network traffic IN and OUT of the openHAB network card, it can create problems for other devices that share that same network interface. By having cameras on their own network switch with a separate NVR package, you can keep the traffic away from openHAB. If openhab develops an issue preventing the box from loading, you only loose openhab and not your NVR at the same time. Sometimes people dont explain the WHY behind things, and sometimes what we want to do is far lower a load then what others may perceive.

The ipcamera binding usually works only on DEMAND, so it only creates a load when the camera is actually needed. Not all software works this way and if your wanting 12 cameras all with HD 25 fps feeds viewed live and access to object detection feeds, then this is going to be different to what I do. Hence the question, what is it exactly that you are wanting to do?

I’m running a few physical servers in a rack, latest one is an epyc rome, terrabytes of nvme pcie4 and 256gb ram with 100gb mellanox to a 100gbe mellanox switch and likewise 100gbe cards in the other servers, I’m streaming crazy bandwidths here all the time… just a plaything really, love being at the edge of modern tech and not being limited by hardware.

What I would love to see in this case, is a nice add-on that simply just integrates into Frigate and gives that same ‘smart’ feature list of notifications on person-detection etc that the HA integration provides. Personally I would be running Frigate on a dedicated VM via KVM so no issue there.

I guess from an angle we could consider it a plug-and-play integration of the Frigate NVR into OpenHab, just like in HA.

These days, more and more people think of integrating their security cameras at home/businesses into their smart infrastructure. Frigate does all the work in that department in this case as far as NVR requirements are concerned, but a binding/addon to integrate Frigate into OH would be a superb addition to OH’s already expansive arsenel, not to mention another marketting pitch keeping up with latest developments. For example I was just the other day looking into purchasing some coral accelerators for myself to play with, that’s how I stumbled upon Frigate.

I’ve put some time aside to install Frigate and tinker with its MQTT integration. One thing I’d actually love is for notifications coming through like ‘Your toddler was seen going out of your gate’… that level of ‘smart’ is what really engages me, however as with all things ‘smart-home’, AI is somewhat still a very young ‘tinkering’ adventure and nothing truly plug-and-play is out there… but that I really believe is the future of ‘smart’ platforms… not just a bunch of sensors and rules… like going from manually controlled remote-control toycar to a self-driving car… leaps are taking place all across the industry, just not in the ‘smart-home’ arena just yet outside of a few very technical individuals with highly bespoke systems.

Considering the above and the fact that there are some highly-talented coders in the OpenHab arena, in my honest opinion I do believe OpenHab should be engaging the ‘future’ by trailblazing the crowd of smart-platforms in this arena, not playing catchup, but a leader in the field… embracing new technology and defining paths to the future rather than being a follower. In ways OH already does this… AI/ML is definitely a calling which OH should pioneer in the field of ‘smarthomes’, because the platform is flexible enough to do it, just needs a few very serious drivers at the helm… oh and addons for the rest of us to then jump onto

For example I was just the other day looking into purchasing some coral accelerators for myself to play with, that’s how I stumbled upon Frigate.

You do know that a lot of other software with more features can also use the coral accelerators? Check out Shinobi as it has a REST api and there are people using it with openHAB to get object and facial features into openHAB.

The question I have is why does it need to be frigate? Other software has been around for longer and hence has more features. I have not trialed any of the software to know how they compare to one another and would find it interesting if people posted what they found when they installed and tried a few of them out.

If a binding was to be created to ease connecting a package to openHAB, it would need to be a package that is flexible that people will not outgrow. Perhaps you can test and do a comparison of what each one has to offer?

True, there are quite a few projects employing accelerators, Frigate just caught my eye because of its simplicity, not trying to be the king at everything, just concentrating on great person detection. Though even a quick browse through the project’s source code and you feel comfortable to jump in and make a few changes here and there for personal compile needs.

I haven’t really come across another clean and efficient project like Frigate, never really got on with Shinobi when I last tinkered with it a couple years ago.

I’ll do as you suggested, a little more research and actual testing, report back my findings.

I haven’t really come across another clean and efficient project like Frigate, never really got on with Shinobi when I last tinkered with it a couple years ago.

Shinobi has changed a lot as it is very active. With all software it is usually true that clean and easy to setup software is missing the ability configure to how you like or is missing features that you may grow into and need. Not to say this is bad of either one, just some people may prefer more features and have a longer learning curve. So yes would love to hear thoughts on what each one is like.

I have started playing with Frigate. It looks very promising

Any initial thoughts on how simple and effective the integration to openHAB will be? Will you integrate it via MQTT?