Z-Wave - Give it time to work

You may have ploughed through my posts on z-wave and you may want some evidence.

or from the top

Read Z Wave Routing Basics first Z-wave has a set of strategies that are used to get a message through. These have changed over time and to try to cover all past versions in a single thread would be hard. For this reason I will concentrate on the mechanisms used in z-wave plus. Not all of these are relevant to older generations. This is what the silicon labs documents say about the risk of broken routes and how z-wave tries to solve the issue. 3.9.1 Routing A Z-Wave Plus node MUST use by d…

Here are some test runs using PC Controller and my test UZB3 controller.

I have it all backed up so not too worried.

You can run these test yourself on your network

I have upped some of the reporting to try to make things fail and have a few sensors that I can force to send a load of reports.

First test 3 devices all binary switches z-wave plus.
the first is a direct route the second 1 hop the third 3 hop. You can see the increase in response time. 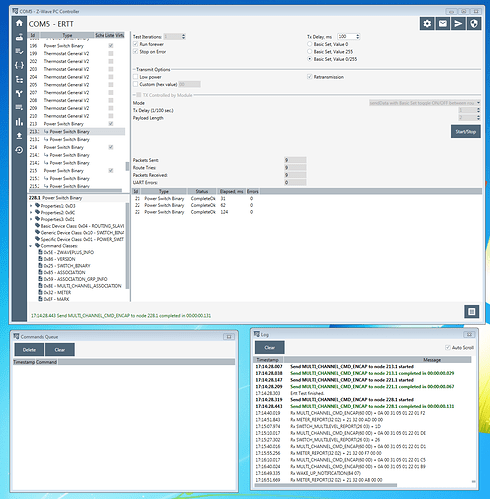 You can see in the log I have a slow rate of reports constantly arriving so this is like a real network but I am going to intentionally trigger some inbound and you can see a batch of reports.

The delay between commands is set to 100ms so not pushing.

here it goes and it is looking fine 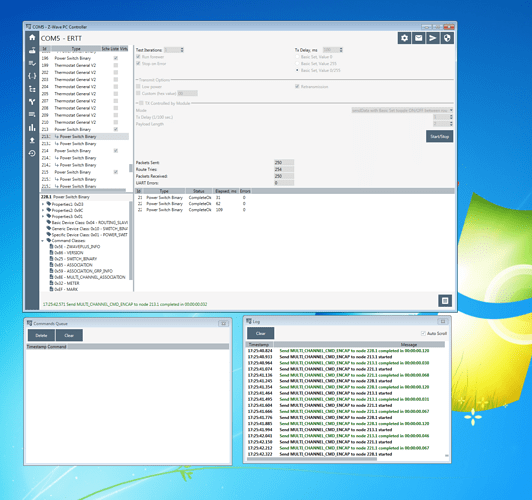 but I trigger a load of reports and 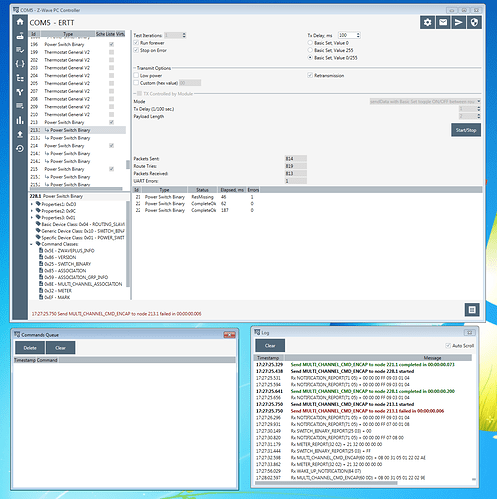 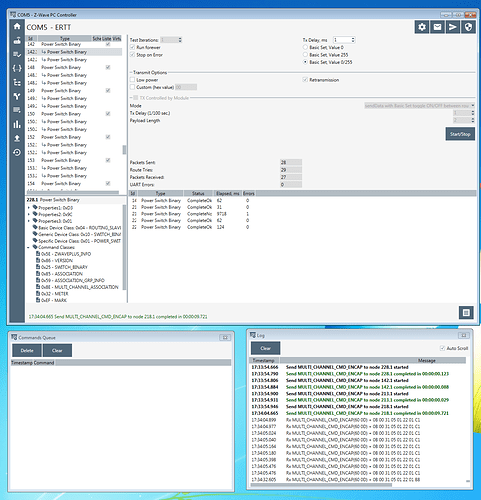 trigger a load of reports to arrive and again I make it fail but this time one of the commands times out and never gets a response.

Clearly neither of these are routing issues. All routes are good but when traffic increases above a certain point, particularly with lots of unsolicited traffic things break.

You can try this on your network but strongly suggest you backup your NVM.

If you do you will find out how much traffic your network can run before you get failures. A test configured similar to your scripts will show if a few pauses would help so that unsolicited reports and commands live together without causing retries or failures.

If your report load is above the capability of the network then outbound commands will regularly fail.

Z-wave works well but it can not process a constant stream of commands and returns. It relies on timeouts and backoffs to manage collisions and slow responses cause timeouts and retries.

As soon as the mix of traffic exceeds the limits and retries start, if the traffic does not reduce it is likely that reports or commands are going to fail.

With a z-wave network and many reporting nodes and command triggers that can combine to peaks resilience can only be achieved by making sure that scripts and reporting are designed to give interactive actions space to work in. If there is no space for interactive actions and retry or even failures happen then the network will not be good to live with.

I hope this information helps people design a practical network that has space left for interactive actions to execute quickly.