I am trying to get a Z-Wave.Me KFOB-S (Type:ID 0100:0103) running in an openHAB 2 installation. The KFOB-S is detected just fine and I can reach the Thing configuration settings just fine in PaperUI as well as in HABmin. I would like to configure the “Action on group 1” according to KFOB-S User Manual. There should be a “Central Scene to Gateway” for the “Action on group 1” parameter. But I cannot see nor select it; neither in PaperUI nor in HABmin.

Any hints? Ideas how to get the KFOB working with a non-“Central Scene to Gateway” action on group are welcome as well.

These two pictures show the options I have in PaperUI. “Control DoorLock” and “Central Scene to Gateway” are missing. 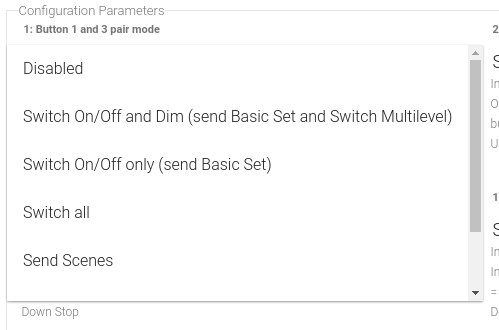 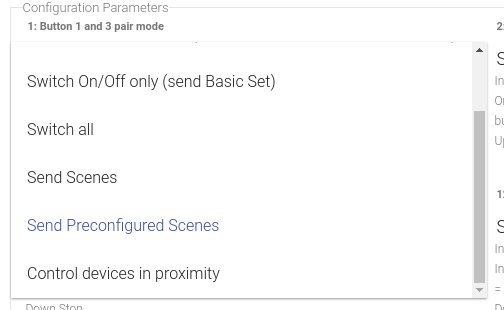 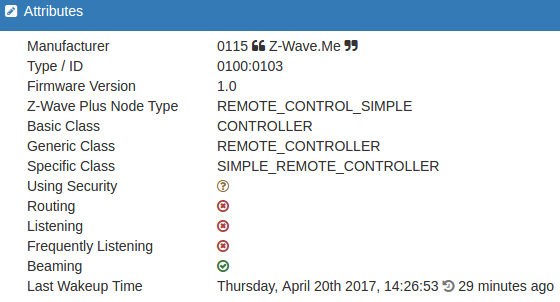 This picture shows the same missing options in the HABmin interface. 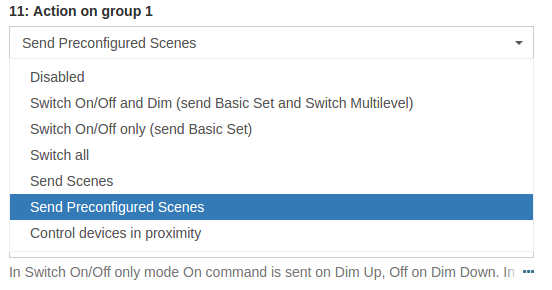 Maybe the 0100:0103 also means that it is actually a Z-Wave.Me KFOB-C. So far I thought that only Popp has a KFOB-C but the text in the German (printed) user manual calls it KFOB-C and the only documentation calls it ZMEEKFOBC.

Anyhow, the two missing configuration paramters are documented there, too.

Well, I got it working but I am even more convinced that the “Action on group x” (Value 8) is missing in the thing configuraiton parameters.

So how did I get it working? I used the fact that the action I wanted is the default. So I removed the KFOB from the Z-Wave controller, did a factory reset of the KFOB and then added it again as a secondary controller. This time I did not touch the “Action on group” configuration parameter and only added the Z-Wave controller to all four association groups.

Now I can see the scene updates on the openHAB console (with Z-Wave debugging logs enabled).

I can’t see any reason why this would be missing. It’s certainly defined ok in the database and I don’t see why the framework would choose to ignore it.

I just added a thing of this type into my system and I see this configuration fine -:

The fact that it is in the database but it does not show in my openHABian, RaspberryPi3, Razberry based setup is puzzling me as well.

My screenshots are not photoshopped!

I tried a hard reset of the controller and it did not change anything. I am now thinking of completely reinstalling (using openHABian again).

I tried a hard reset of the controller and it did not change anything.

It won’t - it’s nothing at all to do with the controller, or the device - just the database. Maybe the version you have has a problem with the database, alhtough from what I can tell in the history, there’s only been one version of this device.

Really stupid question, but you did scroll down through the options ;). I would also maybe try another browser just in case that’s the problem…

Sorry for the late reply. I thought I had configured a notification when something changed here …

Yes, I used the slider bar to look at all the options. You can see it in the screen shots.

So far I always used Chrome. Now I tried Firefox and it is not visible there either.

Right now it works for me as long as I do not touch the default ghosted “Select a value”. Let’s see if it gets better with the next OpenHAB update.

I found the reason - It looks like your device is detected as a KFOB, not a KFOB-S. If you update to a more recent binding it should work as the IDs were updated 2 months ago to resolve this.