Z-Wave Network map: how to interpret 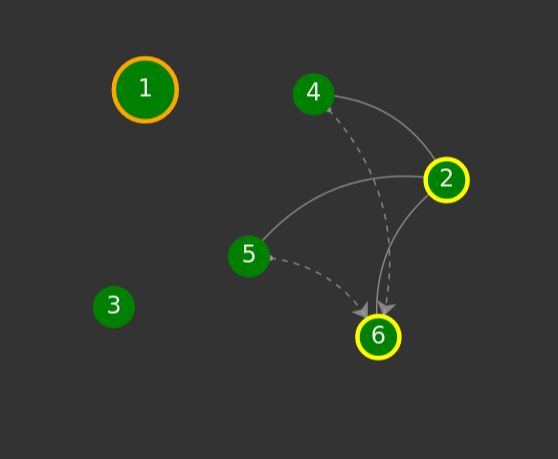 I am unsure how to interpret this.

Node 2, 4, 5 and 6 seem to have good connectivity.
Node 3 is not included in the network but it seems responsive enough not to mark it dead. Is that a correct interpretation? (It shows as online in the things list).
Node 1, the controller, here has no connection to the main network, does that mean the connection isn’t good or is this normal?

I am unsure how to interpret this.

You’ll find some useful extra details in this discussion:

As far as I know, a Z-Wave network is only built up by things that are not battery-operated. That means only devices that are connected to the power supply route messages between the controller and more distant devices. If so, I do not understand the network structure in my network. As you can see in the attached network plan, the controller (node 1) only has two neighboring nodes (node 3 and node 9). This also agrees with the zwave_neighbors entries of the nodes. Node 3 is a smoke detector and…

Actually the lines depict neighbors which may or may not correlate to routes.

The difference between a neighbor and a route is not clear to me. For example, in my map above, my controller (node 1) does not have any neighbours.

And that makes no sense. PErhaps there has not been a network heal done recently to compute neighbors and report them to the binding.

I know the old map showed nothing much until after a network heal.

There has been a network heal. I added a new device (node 6) yesterday, it is in the diagram and the connections are different today.

I am also not getting any information in my items from the 3 unpowered devices (CO Sensors).

There is about 5 meters and a wooden floor between the controller and the closest powered node (node 6). It is also in the back of a pc, so perhaps it really does have an unreliable connection.

Personally, I have not found a good use for the network map. Sorry.

The difference between a neighbor and a route is not clear to me.

Any given message sent by any node in the network may not take the same route from device to device through the mesh. So really it makes no sense to worry about routes at all except on a message by message basis.

So instead of showing routes, the map shows neighbors. And to be specific, it’s showing which nodes have heard from other nodes at some point recently.

The orange node is the controller.
The yellow nodes are routers. These nodes can forward messages from other nodes on their way toward their ultimate destination.

If you are otherwise experiencing Zwave problems the map can help diagnose some things. For example when I started out I noticed certain switches took a long time to switch after being commanded, 10 seconds or more. I pulled up the network map (as it existed back then) and I noticed that only one of my ten devices (at the time) listed the controller as a neighbor and everything else listed that one device as a neighbor. That hinted to me that perhaps I had a bottleneck. That theory made some sense as all mains powered devices were on a different floor from the controller and the one device that saw the controller was directly under the controller.

So I did pretty much the only thing you can do when there is a problem with the mesh network; I bought another mains powered device. I put this one on the same floor but in a different room from the controller. Suddenly all the devices on the main floor started listing that new device as a neighbor and all switching would happen instantly.

So coupling the network map with your knowledge about how the devices are physically located can be used together to help you decide where to put another mains powered Zwave device to improve the mesh. But it doesn’t really tell you much more than that and it doesn’t tell you much on it’s own.

Just to pile on: One way to examine actual routing and the radio strength (not just neighbors) is with a zniffer. Before I had one, I did waste money on devices that I thought would help routing, but found out they did not.
I don’t know your rules, but for me it’s important that as many nodes as possible have a direct connection with the controller. Mesh is a nice idea for flexibility, but speed increases with fewer hops. The network map in OH3 is almost a magical piece of programming (and provides the info noted in the above posts), but I use a spreadsheet for the routes. I have disabled the heal, so the routes do not change much over time.
zniffer.pdf (231.1 KB)

And to be specific, it’s showing which nodes have heard from other nodes at some point recently.

That’s not correct. The neighbours list is built up during the heal. There is a specific command that is issued for devices to query their neighbour. Neighbours are only listed if they are a certain signal strength, and if this command fails, then no neighbours will be listed.

The command in question is often difficult for battery devices, and can fail if there’s a lot going on on the network. It’s not just a case of “who heard who recently”.

If there are no neighbours listed for a node, then it is probably because there has been no heal, or, because this part of the heal failed. Of course it could also be because devices have no neighbours with the required signal strength.

That’s not correct. The neighbours list is built up during the heal.

OK, I was basing that off of a discussion in another thread so had incorrect information.

Can you please send a link to your sniffer?

It seems to me the only useful way to find out what is going wrong in a Z-Wave network. The network map is useless.

[SOLVED] Unresponsive Z-Wave Network: Tools and Approaches to track down the issues Solutions

I have not used the Suphammer, but based on the screen shots, the zniffer setup (that I use) seems more readable. For me it just required a UZB ($35 USD) and the free Silabs software. I found the instructions here. Output looks like this: [zooz-node51 zniff] Also great post. Glad your issues were resolved. Lastly I also had great luck with Chris from Aeotec in the past. Hopefully that is a real person and just not just a screen name for all their tech support. Bob