Z-Wave: No xml for The OCTAN Remote (NodOn)

Hey @chris. Can you take a look at this log from @kimhaak?
https://1drv.ms/u/s!Ag4TtT27NXy2g_0H4yqBUdqm4kgCfA

Node 3 is showing tons of these retires/timeouts, which appears to what’s interfering with the initialization process. 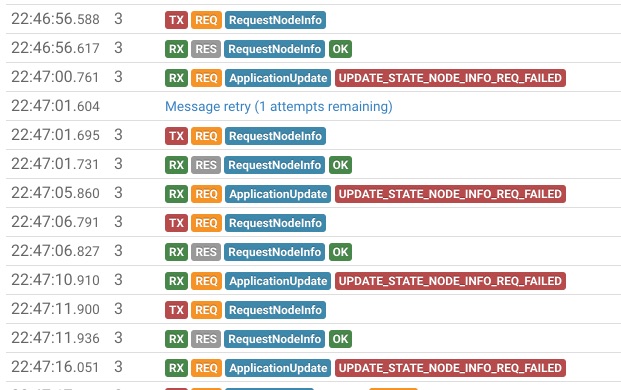 Now i am blocked from making new messages as well, need to wait 12 hours for new topics…

This was my last reply. I need to go to bed now as well, thanks for all.

Its a full stack trace. It also happens if trying to edit properties in habmin.

I can copy the trace to:

I am using a snapshot, så this might be related. I can try to downgrade, if possible, maybe even reinstall to stable version.

No worries. Just give the account some time so that the new user throttling expires.

No need to downgrade. I don’t think that will help. In fact, it might hurt.

Hey @chris. Can you take a look at this log from @kimhaak?

It looks like the binding is still sending requests when the device is asleep and they are failing - I don’t know why this is, and really can’t look for this in the old binding.

My suggestion is to change to using the development branch - then if there is any such error we can actually look for it.

The development branch can be found here -:

The latest version of the development binding dated 27th Aug 2018 is here. Toward the end of last year I spent some time doing some initial refactoring of the ZWave binding in OH2. This focussed on rewriting the way transactions work as this is an enabler for other areas of the code. At the same time I also restructured the different layers of the binding to make things cleaner, and done some changes to support a system of autocoding the command classes directly from the Z-Wave standard which …

Alternatively, this will be merged in a week or so if you prefer to wait.

My suggestion is to change to using the development branch

Yeah, good point. That seems to make the most sense.

I’ll try to do that. Maybe it will take care of the 500 server error as well

I am on the latest snapshot build, and the jar installer you provided in your link, looks to be the same as i am running, and which the logs come from.

No - it’s not the same version - at least the logs that are provided above are definitely not from the new version of the binding. If these are not the logs, then maybe I’m looking at the wrong ones?

The logs i provided is from my box. The box is running snapshot/nightly build.

How can i verify between versions? Because the installed binding, according to the gui, is 2.4.0, and it was yesterday also.

If you can see it in PaperUI, then you do not have the development binding installed. If you’d like to give it a try, this script should do it all for you…

The box is running snapshot/nightly build.

Then this is not the version that is referenced in the above post.

How can i verify between versions?

Please just use the version in the post I referenced above.

Because the installed binding, according to the gui, is 2.4.0, and it was yesterday also.

The file names are not so relevant. All snapshots have the same name, but they can be different (it’s the nature of the build process).

Will this work on openhabian? In regards to paths where files are stored etc.

Ok, now we are getting there! Used 5iver’s script, wich worked just fine. Deleted my things, and rediscovered them. Now i dont get the 500 internal server error while editing the remote

I can even control my first lamp

Ok, so then i guess i will have to go on to the next step, integrate more stuff, and figure out the logics