I am successfully using the Zigbee-Binding with an Ember EM35x Coordinator and many different bulbs (ikea and philips), sensors (aqara) and plugs (Osram).
I have one “Philips Hue Smart Plug” which gets successfully detected by the binding and I can add it as a thing as well.
It gets detected as “Philips LOM001” and has a dimmer channel.
I read that some devices get detected with dimmer channels instead of switch channels, but they can still be used via Dimmer items integrated as Switches in the sitemap.
I tried that with the smart plug and a switch in the sitemap, in the logs I see that the item receives the ON / OFF state, but the smart plug does not do anything.
I also tried with a dimmer slider and values like 0, 1 or 100 with the same result. The device was shown as Online, but changed to Offline a few times. I also tried resetting the plug and removing and readding the thing.
So I enabled debug logging for org.openhab.binding.zigbee, com.zsmartsystems.zigbee and com.zsmartsystems.zigbee.dongle.ember.internal.ash

I attached the logging of one switch-off command and also the xml file of the device from the zigbee coordinator folder.
There are some “EMBER_SOURCE_ROUTE_FAILURE” in the log file.
Does anyone know if the Philips Hue Smart Plug (LOM001) is supported by the zigbee binding? It is not listed in the binding, so I guess nobody tested it yet.

I would be greateful if anybody could support me with that, I can add more logging (maybe from the detection / adding process).

I do not use Zigbee but perhaps the log viewer can help.

I read that some devices get detected with dimmer channels instead of switch channels, but they can still be used via Dimmer items integrated as Switches in the sitemap.

If a device supports the dimmer function, then the standard way in OH is to present a Dimmer item. You are able to send both dimmer and on/off commands to this.

Does anyone know if the Philips Hue Smart Plug (LOM001) is supported by the zigbee binding?

Yes, there should be no problem with support for pretty much any light bulb as they pretty much all support the standard ZigBee functionality.

It is not listed in the binding, so I guess nobody tested it yet.

The list is not exhaustive - most people don’t provide a PR to update the list when they try a new device.

It seems that the coordinator cannot find the device in the network. It’s not easy to comment on why this is without knowing what your network is like. I would turn it off and on again to see if that helps (it will cause the bulb to send out a message to announce that it’s there).

Thanks for the response!
I tried to turn it off and on again, without success. So i removed the plug from openhab (it is not a bulb), resetted it again (by pressing the button 10 seconds) and rediscoverd + added it as a thing.
Here you can find the logs of it: https://easyupload.io/xgfc3m
I think it is more detailed now. While detecting and pairing the plug turned on and off 3 times. After finishing the process I still could not switch it on or off. The device was still “online”.
My Hue Bulb works without any problems it is just the Smart Plug which does not.

I see in the logs, that first the cluster 6 is taken and later replaced with cluster 8. Is this correct @chris ? Cluster 6 is “On Off” in the xml and Cluster 8 “Current Level”.

I see in the logs, that first the cluster 6 is taken and later replaced with cluster 8. Is this correct @chris ? Cluster 6 is “On Off” in the xml and Cluster 8 “Current Level”.

I’m not sure exactly what you refer to here. Both clusters will be used by the binding if they are supported by the device.

Please can you tell me exactly what coordinator you have - including the firmware version. It might be that it’s not compatible with this device if the firmware is too old. Likewise, what binding version are you using?

The issue is that the device left the network shortly after it joined. This is common with ZB3.0 devices that don’t get some responses from the coordinator that they expect relating to security. 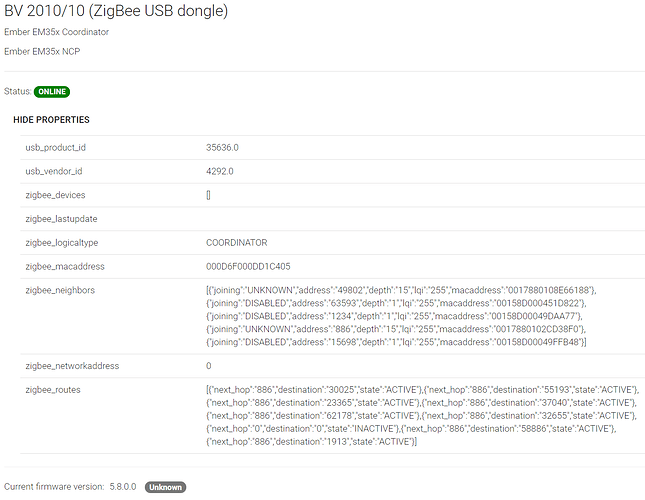 I suspect that the problem is what I mentioned above. We’ve seen it with other Hue devices with this firmware version.

The problem with this stick is it doesn’t work on my Mac due to the USB IDs it uses - there is no driver available. I do have one here and may be able to find some newer firmware, but I’d like to test it before I provide it to others and find it breaks everyones computers.

I’ll see if I can find another box to test this.

Thanks a lot, that would be nice.