In today’s increasingly crowded 2.4GHz environment, “it does matter” - and to add to the confusion, Zigbee channels overlap the wifi band, but use a different channel numbering

There’s also a good explanation of the issues at Metageek: https://support.metageek.com/hc/en-us/articles/203845040-ZigBee-and-WiFi-Coexistence

Ideally, grab an android phone or something similar and use something like “Wifi Analyser” to work out what the strongest Wifi channels in your vicinity are, then set your zigbee channelling as far as possible from them, using advice from the two items above.

WIfi interference to your Zigbee network will result in paring taking minutes instead of seconds, devices getting disconnected and poor communications across the mesh

Unlike Wifi, Zigbee is not frequency agile - meaning that once you’ve set up a mesh on one channel, rechanneling requires manually resetting every single device on the mesh, instead of just changing the router channel.

[If you ever wondered why 2.4GHz Wifi has 13 channels when only 3 are actually ‘usable’, it’s because the ‘original’ Wifi was 1.6Mb/s Rangelan/Wavelan(the original 802.11 standard) and the 14 channels did work without interfering with each other

For those using zigbee2mqtt the default channel is definitely 11. To change this, add the following into your configuration.yaml:

For the avoidance of doubt, the warning about re-pairing is also relevant for zigbee2mqtt:

rechanneling requires manually resetting every single device on the mesh

In today’s increasingly crowded 2.4GHz environment, “it does matter” - and to add to the confusion, Zigbee channels overlap the wifi band, but use a different channel numbering

The bands are so narrow that there is supposed to be not much interference. I am a Wi-Fi engineer so I chose to avoid Zigbee & smart home Wi-Fi devices because of the 2.4 GHz crowding & interference.
UI use Z-Wave which is in a totally different band.

In the US there are only 3 non-overlapping Wi-Fi channels, 1, 6, 11. My closest neighbor has an “IT smart” family member set his Wi-Fi up on channel 7, interfering with both 6 & 11. That just leaves me with Channel 1 for my 2 APs. I decided to only put the 2.4 GHz channel on one of them.

That statement shows some absolutely fundamental ignorance of Code Division Multiple Access/Collision Avoidance systems and the way Wifi works (Hint: this is a field I’ve spent several decades working with, long before Wifi was a “thing”)

You CAN operate 2 different wifi networks on the same channel physically side by side if you wish. The effect will be about a halving of theoretical speed

The idea of using “non overlapping channels” is simply a rule of thumb to try and achieve best unencumbered throughput - and in fact the best set of channels actually varies depending on the modulation methods used (they actually always overlap, see further down)

There’s a reasonable amount of explanaton about this on Wikipedia: https://en.wikipedia.org/wiki/List_of_WLAN_channels 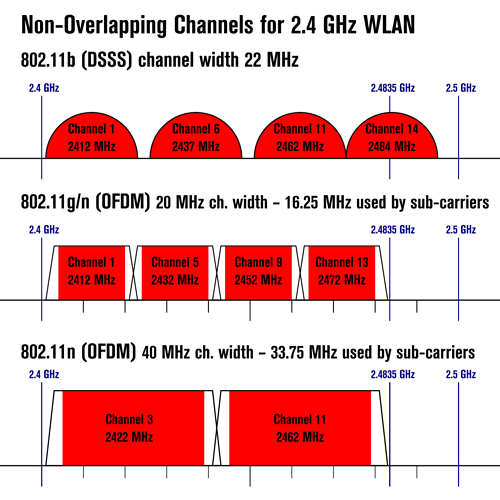 What that means is that if someone’s operating on channel 7 that doesn’t “lockout” adjacent channels:

It simply slows channel 11 down a little and behaves more or less the same as if it was operating on channel 6 if you try to run something else nearby (ie: you’ll start seeing major slowdowns, particularly if your station(computer) is equidistant (attentuation-wise) from the Access Points

In terms of “co channel interference”, if the signal strength of the adjacent access points is more than ~45dB below your desired access point, for all practical purposes “it doesn’t exist”

The fun part is that whilst we talk about overlapping channels as if 802.11b is still in use, the last 802.11b-only chipsets were made more than 17 years ago - and there are such nasty side effects of using 802.11b that the very first thing I advise is DISABLING IT (if any station using an access point uses 802.11b then ALL stations must use 802.11b and they ALL run at the speed of the slowest 802.11b device).

802.11g has been out of production for more than a decade too.

After assessing the prevalance of 802.11b stations in various large-scale academic networks (hundreds to thousands of APs) I disabled that back in 2015 as it hadn’t been seen for several years

More recently I’ve been disabling 802.11g (and 802.11a - its 5GHz brother) - in the main academic network I administer (1500 access points) there were a grand total of 3 802.11g stations - two of which were ancient USB sticks and the other was a 16 year old laptop computer which was plugged into ethernet anyway

The images below give a better representation of the spectrum shoulders of 802.11g/n channelling. OFDM gives much flatter and sharper shoulder cutoffs until you get down to about -30dB where they start spreading out into sideband lobes - as you can see, a zigbee channel is going to see interference from the sideband lobes even when sited “between” the “non overlapping channels” - which in reality aren’t non-overlapping, just minimally slowing each other down.

This is why I recommend that it really does pay to find out which channels are operating around you, then channel your zigbee (and your own wifi) accordingly. Your network will run much more happily

Of course for best wifi results, you’re better off using 5GHz wherever possible.

Unless you are in Japan, Zigbee channel 25 is furthest from 2.4GHz WiFi. Here’s a flash from the past…

One of the reasons I was so pleased to use this binding, was to be able to manually choose a channel and eliminate wifi interference. I’m not sure where the best place would be to put it, but IMO it would be handy to have this http://www.nickhunn.com/rf4ce-–-the-wireless-remote-control-that-keeps-coming-back/ https://www.digi.com/wiki/developer/index.php/Channels,_Zigbee) information somewhere in the documentation. And/or incorporate it into the channel drop down like: 11 (overlaps Wi…

WIfi Channel 14 is only usable for 802.11b in Japan - it’s specifically off limits for the other modulation schemes. That said, it is usable in other countries if you have a ham license (along with wifi 15)

if you use Wifi channel 12/13 for your wifi like I do here in Europe it’s smack on top of zigbee channel 25. Wifi 12/13 may be used in the USA by hams so there’s no guarantee they’re vacant

The fun part is that whilst we talk about overlapping channels as if 802.11b is still in use,

Many enterprise systems especially in dense deployments restrict channel bonding. Although the newer standards permit bonding it is not required or used everywhere in real world enterprise installations. Many home systems have configuration settings too.

I support an active system of over 4000 access points. What is your non-theoretical experience?

Campus systems supporting ~35,000 users.
No bonding in sight nor would I recommend it

The biggest gain in a managed network is to turn off the majority of 2GHz radios and steer people onto 5GHz where we drop one AP per office and allow them to run up to 1200Mb/s - you can’t so that in a domestic environment as you don’t have any control over the channelling, power levels or transmitter density so the result is everyone in an apartment building has their 2GHz radio running at full power, usually on channel 1 and the gripes about how rotten the throughput is

2GHz is wild west territory out in suburbia and zigbee has to dance amongst the gaps. Having to re-pair everytime you rechannel means you really do need to try and get it right first time. The fact that it defaults to channel 11 is the worst of all worlds

No bonding in sight nor would I recommend it

So the channel overlap I stated is correct. I am aware of only one Wi-Fi vendor that tried to have their APs all on one channel.

The 4 channel scheme you stated is using a slight overlap.

I work in a residential University environment so we use bonding in some areas for additional speed.

2GHz is wild west territory out in suburbia and zigbee has to dance amongst the gaps. Having to re-pair everytime you rechannel means you really do need to try and get it right first time. The fact that it defaults to channel 11 is the worst of all worlds

Zigbee defaults to channel 11? I do not use Zigbee but my test stick supports it. I decded on Z-Wave to avoid the dancing.

I decided on Z-Wave to avoid the dancing.

This discussion isn’t about Z-wave, 433MHz or the pros and cons of other methods.

It’s for people who’ve got Zigbee, to make best use of the available channeling and to understand why they may be having problems.