The channel for the Button itself is discovered as Dimmer and every click just is interpreted as “100”.
So the only way I could use it would be a rule that actually reacts on “received update” since the value never changes.

Thanks anyone who has some expierience with that button to share.
Overall if you want some feedback to the button… Its really a neat thing which can be mounted in various ways. Double sided tape included, magnetic base included, mounting for screws included.
Labels to change the face of the button included. Really nice little thing for only 6 Euros. 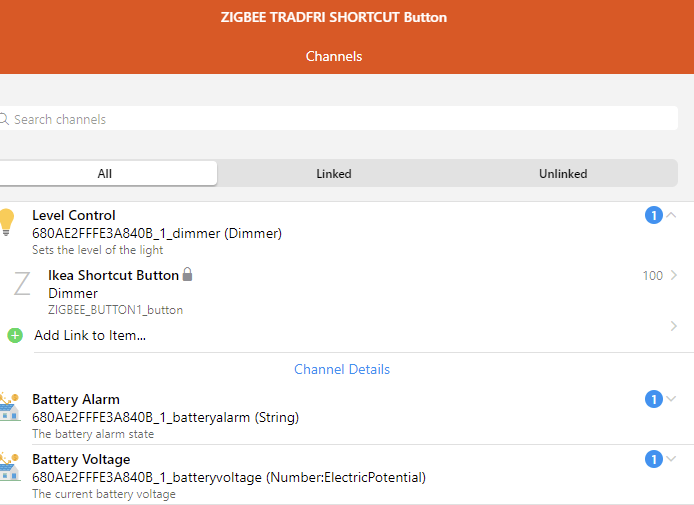 He,
Just got one of the “new” buttons yesterday and connected it to my OH3 setup via zigbee2mqtt and mqtt (bit different than your approach).
To get access to all 3 actions (on=single click , brightness_move_up=hold , brightness_stop=release hold) I created the “action” channel as “string” which then gives you access to the 3 values mentioned beforehand.
You can then use them in rules etc., or to simplify, you could use State Descriptions (for visuals) or transformation map. 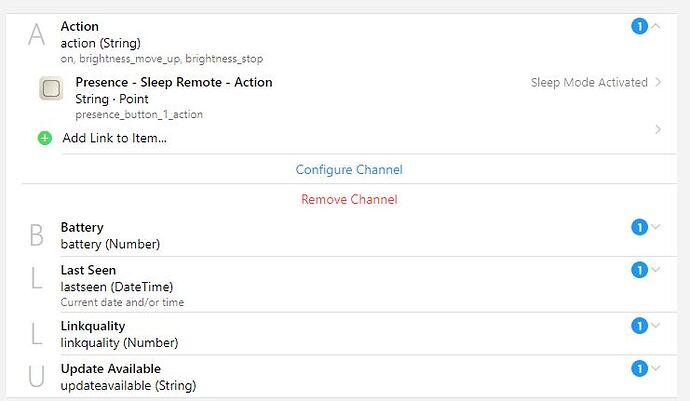 Edit: Here is the link to the button’s configuration options from zigbee2mqtt.

got one of the “new” buttons yesterday

cool … also thinking about zigbee2mqtt to solve it

nevertheless… this device drains the battery within few HOURS to me.
Does it work normally for you? Then mine is probably defect?

Got it in use for a few days now, whereas only as “sleep mode” switch which is only used like once a day. Battery still shows 100%.

, whereas only as “sleep mode” switch

I have seen this battery drain on Ikea On/Off remotes as well.
I did a zigbee sniff, I saw they requested a firmware update, so my theory is that they stay awake and do not go to sleep as they should. But it is only a theory, and not founded on real knowledge.

Just to check - did all these batteries come from the same packaging, or from different sources?

did a zigbee sniff, I saw they requested a firmware update, so my theory is that they stay awake and do not go to sleep as they should.

When looking at zigbee2mqtt logs I can only see activity of devices (at least stuff like bulbs or buttons) when you use them, not when Not in use (compared to like temp sensors which send an update in a certain frequency).
Also OTA updates (at least for bulbs, did not have one for the button) take about 10min to complete after which my devices are operating normally again.

do you execute that manually or is that an automated feature of zigbee2mqtt that if a firmware is available it is applied to the device?

zigbee2mqtt allows for checking and then updating re new firmware, but I would think that this also works for instance with an IKEA hub.

@shorty707 - your initial discovery post above - was that using deconz?

no
the standard zigbee binding

I saw they requested a firmware update

This is perfectly normal - it’s the way Zigbee works and should not impact in any way the device going back to sleep. You will likely see this with many devices.

anything @chris could so that the Binding responds to the device so it goes Back to sleep?

There shouldn’t be anything required. The way zigbee battery devices (end devices) work is they always sleep. They will wake up periodically - maybe every second, or every few seconds, or possibly longer. Normally it should be less than 7.6 seconds, but some devices do employ longer sleep times (it really depends on the device).

hey this a very old thread
I just answered aboves new question.
I meant not to bring mine very old ones back to any attention as I was unhappy with zigbee overall and did return most of it

Sure - I was just responding to the questions to me that I missed when I was moving house. Providing information about how the system works will hopefully help people understand their system, and interpret what is seen in logs.