Is anyone aware of a manufacturer who produces a ZigBee based wireless Thermistor/Temperature sensor?
I am looking for a device(s) which will integrate with an existing ZigBee network that will report back the temperature of:-

Zigbee based WiFi? Is that a typo? If not, I’m interested in what you mean!

There is no such thing.

What are you really asking??

Apologies I mean Zigbee. I may be incorrectly thought Ziigbee was Wi-Fi but on a specific bandwidth and network protocol and not the normal 2.4Ghz or 5Ghz used for domestic networking? Or am I very wide of the mark?
Fozzie

Zigbee and WiFi are both wireless, and both operate around the 2.4GHz, but that’s about where the similarities end. You’re right that they’re different protocols. They don’t ‘talk’ to each other natively - that’s where openHAB comes in!

Thank you. We have a ZigBee based heating control system in our village hall and I am trying to ascertain If I can integrate a wireless remote temperature sensor to measure the temperature of hot water (and cold as per my first post). I can find lots of ZigBee room thermostats but very little in the way of Pipe Thermostats. Ther nearest I can find is for electric underfloor heating but not sure the sensor is submersible as its designed to be buried in the floor.
Fozzie

I’ll be surprised if something as described in the official post exists off the shelf, but others in this forum will know better.

I would remove the word ‘wifi’ from your original post, just to prevent further confusion!

I think for hot water radiator systems something like is is usually used for control.

Thank you Bruce but that’s a replacement for a thermostatic valve for a radiator. I am trying to measure the temperature of the domestic hot water which needs a device with a thermistor or a probe that can be clamped to the outside of the HW pipe. If I could find a zigbee version of a thermostat you clamp on the outside of a hot water cylinder thats the sort of thing I need. there are lots of analogue versions of this and pipe thermistors like this https://sensorshop.co.uk/products/tt0p-10k-ntc-thermistor-pipe-sensor or this. https://uk.farnell.com/amphenol-advanced-sensors/jc103c4r5-20/ntc-thermistor-9-925kohm-clip/dp/2094007?gclid=EAIaIQobChMIuJCJldbb6wIVi813Ch1jEggUEAQYBSABEgLPDvD_BwE&gross_price=true&mckv=sH7c60tGT_dc|pcrid|459864482324|plid||kword||match||slid||product|2094007|pgrid|114464711264|ptaid|pla-394100724927|&CMP=KNC-GUK-SHOPPING-SMEC-Whoops-Newstructure-31Aug2020
But they need attaching to a zigbee device which will report back the data.
Fozzie

What you listed are just the sensors with no logic. Perhaps pair it with something like this?

Here is a Z-Wave sensor that accepts a temperature input too. For Z-Wave be sure you get a device for your region of the world.

Many thanks Bruce. Yes was aware that they were sensors only but wanted to show type of temperature device required. The ZigBee device you have linked to seems the right type of appliance, thank you. I will forward this to Tensor who build and maintain our HeatingSave system to see if it can be integrated.
I started looking at the Sonoff TH/10-TH/16 to which you can attach a temperature probe but the switching relay is in the device. What I need is a Zigbee device that can report the temperature to the HeatingSave system wirelessly and the system to open a contact to stop the pump when it reaches a set temperature.
Fozzie

If you have some practical skills available, I would at least experiment with a cheap Zigbee room temp/humid device. Open it up and see if the sensor can be detached or replaced on a flying wire. That would allow for contact measurement, sandwiching in a wrap to pipe etc. Obviously ignore humidity readings.
Immersible might be a much greater challenge.

Can you expand a bit on what actual systems are involved here? Seems to be a proprietary heating system that requires Zigbee sensors, fair enough. But this other stuff for legionella, what is that going to report to? Is that bound to Zigbee?

I started looking at the Sonoff TH/10-TH/16 to which you can attach a temperature probe but the switching relay is in the device.

But you don’t have to use the relay, if the device is cheap and convenient. Mains powered device is probably not convenient though. Is WiFi actually available at the location? note that WiFi from battery device are generally incompatible requirements.

Can you expand a bit on what actual systems are involved here? Seems to be a proprietary heating system that requires Zigbee sensors, fair enough. But this other stuff for legionella, what is that going to report to? Is that bound to Zigbee?

Without going into too much detail we run a Village Hall that has an attached doctors consulting room. To re-open after Covid lockdown the NHS want a legionella risk assessment. This assessment failed due to the hot water at the doctors hand basin not reaching 50C within one minute. This is because there is a very long draw from the HWC. The solution is to fit a HW circulation pump which ensures hot water immediately at the tap. However this wastes energy running continuously through electricity usage and heat loss from the HW continually circulating. My remedy was to control the pump using a pipe thermostat that turns off the pump when the pipework reaches temperature (this needs to be wireless due to the tortuous route to run mains or low voltage wiring between the thermostat and pump).
In addition we have a Heating Management System which uses Zigbee to control radiator stats and relays. In addition there is a booking calendar for hirers so the heating is directly controlled through the calendar. If I could integrate with HeatingSave then the pump would only come on 10 mins before the doctors regular surgeries and turn off afterwards saving even more energy.

In addition we have to measure the temperature of the stored cold water in the cistern and the temperature of the incoming mains near the ballcock on a monthly basis. as this is in a loft space above the kitchen with a very high ceiling this involves getting an extension ladder out each time to climb into the loft. Again with the right Zigbee temperature sensor we could monitor this remotely through the heating save interface as its just another temperature widget like in screenshot below 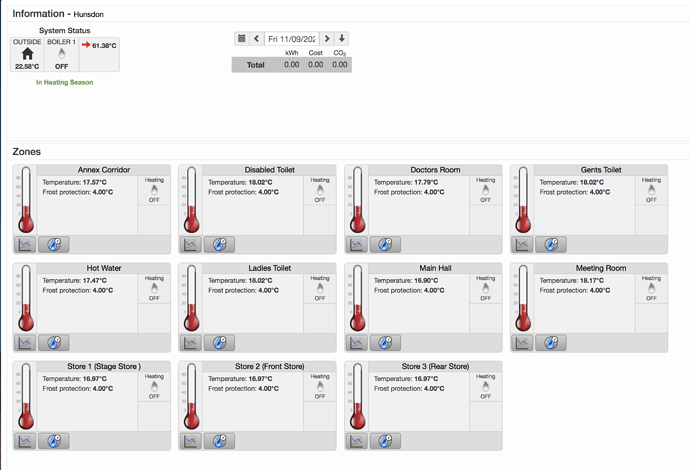 But you don’t have to use the relay, if the device is cheap and convenient

I am interested in this statement as I thought the Sonoff device was the equivalent of an electronic thermostat such as used in normal central heating systems. ie when it comes up to temperature the contacts open. (as described above we cannot run wiring from this device to the loft where the pump will be located). Are you saying that this device might send data to another Zigbee relay to operate it remotely? This is where my lack of knowledge of things like Modbus and MQTT let me down as I don’t understand how these devices function and if they need a gateway to the internet to operate.
Many thanks
Fozzie

In addition we have a Heating Management System which uses Zigbee

Okay, you’re tied to whatever external interfaces that offers. I can only see the blurb mention a proprietary “HeatSave” multifunction gubbins, and Zigbee.

I’d be really inclined to experiment with cheap Zigbee room temperature devices. Strap the whole things to your tank and incomer under a good layer of insulation, they’ll give a good indication of water content temp.

when the pipework reaches temperature (this needs to be wireless

The same idea should work for hot pipe, but I’d be rather less confident about that. The body/battery of the Zigbee sensor probably won’t respond well to sustained high temp.
I’d still open one up and see if you can rework the sensing element on a flying wire, which could be strapped to the pipework.

You wouldn’t really care about what it did, if you only read the temperature for your own purposes.
but it ain’t going to help here anyway -
it’s not battery and it is WiFi.
HeatSave probably has no idea what a Sonoff is.

I also want to measure the temperature of my hot water cylinder with a ZigBee sensor. I have a Sonoff ZigBee temp sensor but don’t think it would be possible to extend the probe. 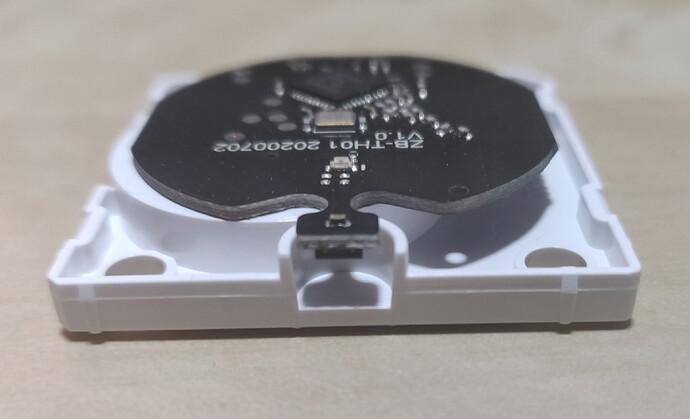 @FozzieBear I just want to add that we are looking for a product exactly like you describe here - Zigbee, with NTC wired temperature probes inputs. Non-existent. I think we shall make some and start selling

Clamp-on pipe ZigBee temperature sensor, made in the UK.

@FozzieBear Did you get anywhere with this? My house is peppered with Tuya ZigBee sensors, relays and TRVs that turn the on and off (boiler/immersion/underfloor/radiators) but I would like to be able to control the temperature of the water coming out of the boiler. I would be very interested to hear if you managed to complete this. I bought Salus PS600’s but they need an expensive proprietary Salus ZigBee gateway (~£80) to work so I’m not keen.

Hi John,
I’m afraid I gave up on an easy solution to my particular problem. We have half resolved it by installing wired sensors that connect directly into our BMS HeatingSave which displays the temperatures realtime. However we gave up on a zigbee controller to measure the remote temperature.
However your situation is different. You appear to want to control the temperature of the water coming out of the boiler? I would have thought that means controlling the boiler electronics or as a minimum turn the boiler on and off with a zigbee switch which has a temperature probe (salus 600)? I am using SmartThings in my own home setup and have given up trying to integrate different manufacturers products which are generally proprietary and only working with their own gateway. There are some workarounds but they are at best clunky. It’s better to choose a system and stick with their kit even though its twice the price of Tuya and other Chinese devices. Its a bit like Betamax and VHS. Someone needs to knock heads together and come up with an industry standard that works together. Only the EU is likely to do that as the US are happy with their own standards.
Stump up the £80 and buy the gateway its will save you lots of headaches in the loing run