I’m considering adding a switch my ceiling fan in Family Room and was wondering if anyone knows if these 2 switches are really interchangeable or not. 1 is labeled an actual Zwave Fan Control and the other is labeled a Dimmer switch.

I actually have a few of these dimmer switches already. Will they work as a Fan Control or do you need the more specific one? I just don’t know if 1 is rated better for the proper amperage that deems it a “Fan Controller” over the other one.

The Vizia RF + 1.5-Amp Quiet Fan-Speed Control from Leviton fits into a standard wall box and replaces existing switches or fan speed controls to provide the visual consistency and features of Vizia R ... 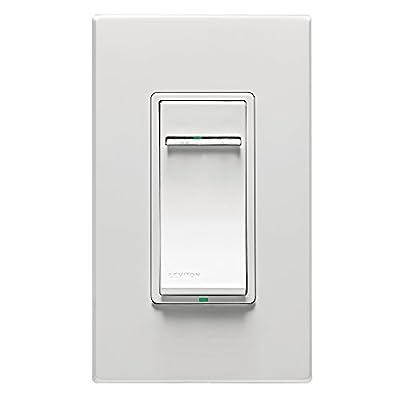 The Leviton DZMX1 is a Z-Wave enabled universal dimmer designed for use for most residential lighting applications. A large range of lighting loads are supported including dimmable LED and CFL, as wel ...

I’m no electrician but I do know how dimmer switches work and I’m 99% positive you can not use a dimmer switch on a fan. A dimmer works by rapidly turning the current on and off, fast enough that the human eye just sees everything as dimmer, not strobbing. If you did this to a fan I’m pretty sure it would either not work or completely wreck the motor.

Not quite right. It depends on the type of dimmer and type of fan power inlet. Traditional dimmers for CFL and incandescant lights use leading/trailing edge, that won’t work well with an AC fan, true.
But LED capable dimmers output DC using PWM (quick-on-quick-off, multiple times per second, as Rich described), that will do. No, that won’t wreck your motor. That’s how the fan inside your PC is controlled, too.
Now if you connect your fan to a switch-dimmer to use PWM (like the second one apparently does as it says to be capable of dimming LEDs), it will work if you connect it directly, i.e. with no AC-DC converter inbetween (which is probably part of your existing fan). But you need to ensure your dimmer is actually truely set to run LEDs (i.e. use PWM). Quite often that’s just a marketing claim

The only device I know to be able to do this (from Qubino) actually decides based on the power that you apply (standard 110/230VAC => standard edge dimmer; 12/24VDC => PWM dimmer).
Anyway, just give it a try and return it if it doesn’t work the way you want it to.

I’m not sure about the interchangeability; I have both. They operate differently in that the fan control only has 4 levels, 0,33,66,100% whereas the dimmer has 0-100%

The fan control shows up as an Unknown device in the openhab zwave binding so it’ll require some extra tweaking for operation.

Thanks guys for the feedback. So i don’t blow up my fan motor and i went and purchased the actual fan switch and should have it in a few days.

Does it show for you as an unknown device in OH1 or OH2? It probably needs to get added to the database.

How do you like the dimmer? I’m thinking about getting them but not sure if I like the idea of pushing the bottom of the switch to dim up and down.

You mean the Fan Switch? I did actually try them both for a minute. I recommend NOT using a standard zwave dimmer switch in the fan. The fan/motor was very load when I tried that.

But the actually Fan Switch works great. It looks exactly same as the other dimmer switches in my home. And although I can do simple on off commands and increase/decrease the speed, I think the real benefit will be after I set some rules in OH.

Glad to hear you like it. I really like the new Homeseer dimmer but it doesn’t look like they have one for fans. I’m going to go with the Leviton for now. Thanks!