Any help is greatly appreciated

I thought one-wire was a completely separate technology. There is a https://github.com/openhab/openhab/wiki/One-Wire-Binding separate one-wire binding so I would expect a different binding configuration than z-wave. Perhaps I don’t understand what you mean by “added a one-wire temperature probe”.

Sorry, my mistake, it’s a DS18b20 probe attached to the door sensor. Fibaro’s door sensors allow for these probes to be added. 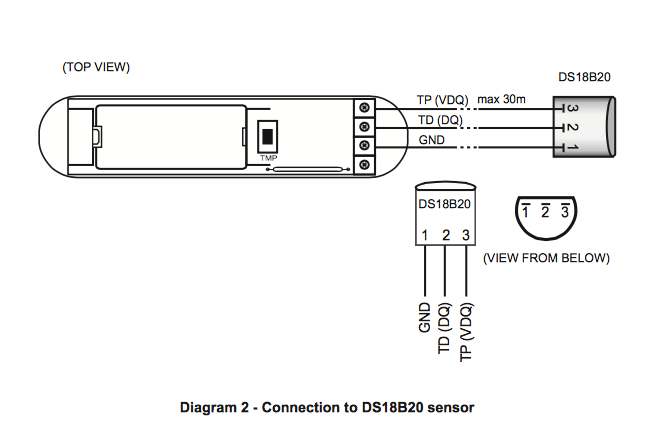 Cool! I didn’t know such things existed. Wish I had some advice to help. Good luck!

Yes, it’s cool, you can add a thermometer for less than two bucks! If you get it to work…

Although it is not mentioned in the FGK101 manual, it is true for the FGBS-001 Universal Sensor: after installation of the temperature sensor you have to excluded and include the sensor to your z-wave network:

Note!
Every time when any changes are made to the
configuration of TP and TD lines (1-wire), e.g. when
DS18B20 sensor(s) is (are) included/excluded, it is
necessary to execute the procedure of exclusion
and repeated inclusion of the sensor module to the
central hub. It should be remembered that the
system shall enter into the programming mode only
once all the connected sensors have been
detected (about 10 s).

So if you really tried already everything else you should give this a chance.

Although it is not mentioned in the FGK101 manual, it is true for the FGBS-001 Universal Sensor: after installation of the temperature sensor you have to excluded and include the sensor to your z-wave network

Thanks @chris and @sihui, I did try to exclude and include although not sure the procedure went fine… I will try again. If my node ID is 5, should I be using an endpoint ID for the temperature? How do I know which? Does Habmin show the temperature readings?

If my node ID is 5, should I be using an endpoint ID for the temperature?

Does Habmin show the temperature readings?

Got it working, had to exclude/include once more and @chris’ configuration (endpoint “2”) gives the temperature reading:

I tried to configure the FGK101 door sensor with the DS18B20 but i have troubles.
I am using OH2 with the latest Habmin 0.1.7 and i thought maybe i can get the temp-sonsor runing directly with the Habmin.
i have installed the DS18B20, excluded the door sensor from the z-wave network, reset the sensor and included it again, but habmin dont show the temp channel.
Furthermore, i tried to configure it within my item file with the

but also no data available. Does somebody have an idea

Works for me on OH1.

Is there a posibility to configure the update intervall or something like that? Or any other idea what I’m doing wrong?

Now it seems to work:

@nibi79 could you share how did you manage to get it working?
I’m using Z-wave binding in 2.0.0.SNAPSHOT version.
Installed termometers and then excluded and reset the sensor.
In openHAB I’ve added a new thing and shortly after it recognized the device type I linked DoorSensor, Battery and Temperature to proper items.

Door sensor seem to work, but nothing else does.
I see that Battery and Temperature’s value is NaN.

The only tip is to exclude the sensor and then include it again. Try to heal the device over HABmin panel.

I believe the range of the zwave battery devices is a problem when the sensors try to update the values. It only works fine when the device is in the near of my razberry modul.So when i put the door sensor in another room it seems there is a connection problem although I put the sensor directly to fibaro wallplug (and there should me a mesh network). It only works sometimes although there are big temperature changes throughout the day owing to lamp with big heat radiation.

I’ve had my fair share of problems with z-wave and oh2.
I recommend excluding the device. Then hardware reset the device, and then include it again.
Also make sure the device is fully initialized before starting to use it, and when it’s initializing, have it close to your controller.

If you have the z-wave plus version (Firmware 3.2+), use this procedure: