Should there be also an Include Devices option? 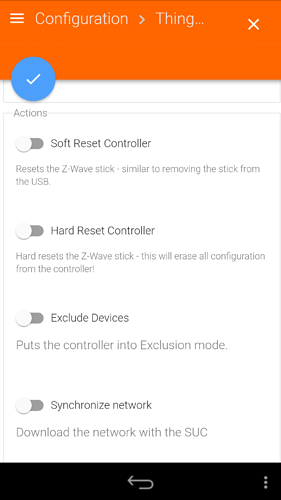 Should there be also an Include Devices option?

No - you include devices using the inbox search function in the same way as all other bindings in openHAB.

I did not mention before but I use an old model Aeon Labs stick.
So how will new Things be discovered?

It’s the same as with all other bindings:

Configuration -> Things -> hit the plus sign on the top -> select Zwave binding.
That’s it. Now you have by default 30 seconds of inclusion time.
Of course you then need to set your device into inclusion mode, preferable at the beginning of the 30 seconds inclusion timer.

… or go to your inbox and hit the plus sign.
I had to take a look first as I never do this with PaperUI, only HABmin

I did not expect that but it works indeed.

Only one weird thing happend.
Two led bulbs appeared as one Thing (node).

Since that isn’t possible in ZWave, can you explain what you mean - or provide logs showing what the issue is? Also, please explain your configuration and what you see etc.

I used the img and put it on HDD wherefrom I boot my RPi3B+
I added Things with the stick manually, first exclude followed by include. I included 2 Domitech dimmer bulbs (2 different node-id’s). Then I added a Zipato RGBWW bulb wich also appeared as a Domitech dimmer (node-id 6).
Did an exclusion followed bij new re-inclusion but the RGBWW kept appearing as Domitech dimmer. I gave up and wanted to take a look at it later.
On PaperUI I turned the already installed AN157 plug to Off and that action turned everything off as if everything was grouped, all switches and lights and after that my zwave network was dead.
Next day I did a fresh install of the img. Stick and two other nodes appeared as unknown (those 2 other nodes are really near the stick and are a Neo Coolcam sensor and the AN157 plug) nothing else was discovered. I was a litlle surpised as I did a hard controller reset when the dead network happened. I wanted to include the RGBWW and the 2 Domitech bulbs through discovery (as answered here in this topic) and hitting the + the RGBWW appeared just like that (also one of the two Domitechs). At first I was kind of happy until I found out that the RGBWW did not change color, only cold white and warm white and the brightness (dimming) worked and by accident to notice the Domitech in other room is responding to On/Off and dimming level also.
I do not know where or how to create logs. I think they are lost anyway because of fresh img install the day after. Maybe RGBWW was included to soon after inclusion Domitech (not fully initialized) and mixed some dimming channels?

Up to now the Neo sensor and Everspringplug still appear as unrecognised devices.

I was a litlle surpised as I did a hard controller reset when the dead network happened.

My guess is that the controller was not hard reset then if it was still showing nodes.

Maybe your list of things has got out of sync with the list of nodes in the network and this is causing the confusion.

I do not know where or how to create logs.

A good place to start is the documentation

Up to now the Neo sensor and Everspringplug still appear as unrecognised devices.

I don’t know what the devices are identified as, so again, it’s hard to comment. You need to advise what type/id are identified. If these are battery sensors, and there is no type/id, then probably you need to wake up the device.

Thank you for your answers (and all your work for zwave binding in openhab).
I will take a look at the docs in the links you provided.
Maybe I should do a firmware upgrade on my old stick or even get myself a Gen5 stick

The Gen5 stick will help from a range perspective, but the Aeon firmware hasn’t changed and doesn’t support many of the new features. Most features are handled by the binding, but there are some debug/maintenance additions these days, but not too many dongles actually support them. I’m therefore not super sure it will help too much to be honest.