Could anyone describe the differences between (under association groups for things):

Some things may only have one available whereas others have both Device status and Controller updates.

What are the differences between them?

I have always used association group 1 except when one switch should turn on/off more lights without going via the controller. But why am I using Controller updates for one device and Device status for another to send updates to the controller?

Why I am suddenly curious about this:

I switched to the new z wave controller thing and deleted the old one when upgrading to 2.4.

Now I can sometimes choose between “node_1” (default selected) and “Controller” where I assume the Controller is the master controller.

Could anyone describe the differences between (under association groups for things):

Do you mean these are the names of association groups?

If so, you need to check the manual of the device to find out what the association group does.

In general, for ZW+ devices, ZWA tried to standardise the use of one association group for sending updates to the controller - they called this the Lifeline, and it is required to be group 1. This is normally the only group required to be set to send updates to openHAB, and normally, if you set other groups, it will cause duplicate messages to be sent.

Prior to ZW+, there was no standard, and manufacturers called their groups different things.

In the database, I try and keep the standard name of Lifeline where there is a ZW+ device.

I’m not sure if that answers your question? If not, can you show me what you mean…

That makes sense to me and I have written and thought about ass group 1 as “Lifeline” for all devices.

This is a ZW+ device aafaik, and in the manual it says Association group 1: Lifeline.

The thing was excluded and included after upgrading to 2.4.

Since you’re in the thread chris, and since it might be related:
Do you have an idea of why “node_1” is showing in the selector for association group 1? If unselect and save I am afraid that it will not show again as this node does not show for (some) other things. I can also choose Controller in this selector and in the dropdown for ass group 3 only the Controller is available in addition to non-controller-nodes.

That makes sense to me and I have written and thought about ass group 1 as “Lifeline” for all devices.

Just be a little careful as it’s only applicable for ZW+ devices. Prior to this you will find it’s not standardised, and typically Fibaro devices for instance tended to use group 3 for controller reports.

I would need to check, but I thought that I removed the “node_1” sort of naming convention from the controller. The reason is that depending on the device, and command classes (etc) there are different ways for this to be configured, and I thought I now just used “controller” (or similar). I will check this…

Do you have an idea of why “node_1” is showing in the selector for association group 1?

I think it’s related to my point above - I don’t think it should be shown, so I’ll need to have a look at how this is managed.

Gotcha. I do believe I only have ZW+ devices though. And I double checked the motion sensor I was mentioning (FGMS-001).

But it seems like it is safe to think of it as “lifeline” for ass group 1.

However, for the other association groups there seems to be a discrepancy between what the database says and what shows in the ass group description in habmin/paperui. 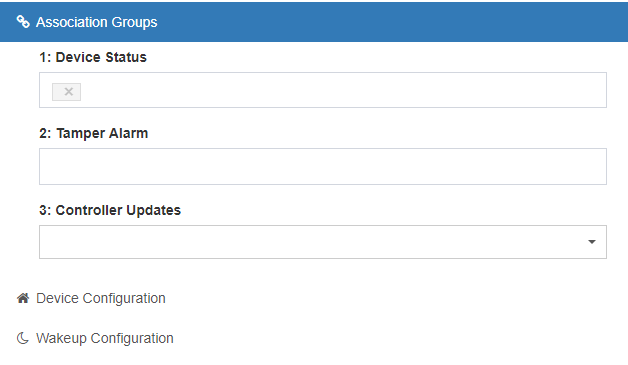 Database 5 groups; Lifeline, Motion, 3. Tamper, Motion BC and Tamper BC where the two last ones probably can be ignored: 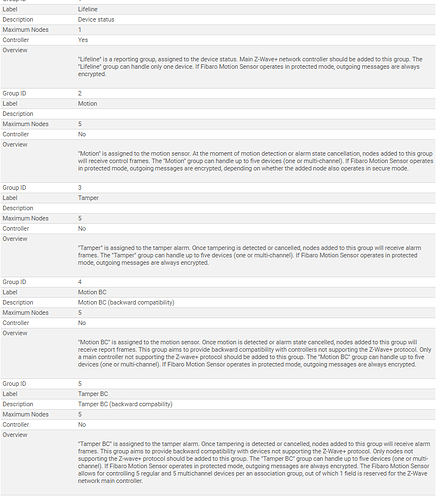 I do believe I only have ZW+ devices though. And I double checked the motion sensor I was mentioning (FGMS-001).

It looks to me that you don’t have the ZW+ version.

Looking in the database, there are 2 versions, <2.8 and >3.2. The first one doesn’t have the ZW+ class, and doesn’t have the Lifeline group, so is not ZW+ and this seems to be the version you have (based on the associations). This has the “Controller Updates” group rather than the “Lifeline” and you therefore need to ensure this is set.

I think you are looking at the wrong device. As above, there are two. Given the association groups that you are seeing, I expect you have the old one. Please confirm the version of your device (in the device properties).

But it seems like it is safe to think of it as “lifeline” for ass group 1.

No - as above, prior to ZW+, Fibaro used group 3 for its controller updates, so group 3 can be considered as the Lifeline for this device.

The one on 3.2 has the Lifeline association group (which I am unable to set. I will hopefully be able to create a proper bug report for this pretty soon).

Does anyone know of a non-Home Center-way of updating the fw for Fibaro-devices?

Does anyone know of a non-Home Center-way of updating the fw for Fibaro-devices?

I don’t think it’s possible unfortunately. I had a discussion with Fibaro a year or so back, and they told me that for now they will not distribute the firmware files. They did acknowledge that this might change in future, but until this does change, I don’t think there is any way to do this.

Note though that I expect the old group 3 probably does the same thing as the Lifeline group.

Gotcha. They haven’t picked up when I have called, but I will try to get in contact with them.

If I were Fibaro I would ensure and improve their position as go-to supplier of pretty robust z-wave-devices and possibly excluding anyone who is not using Home Central cannot be a good idea.