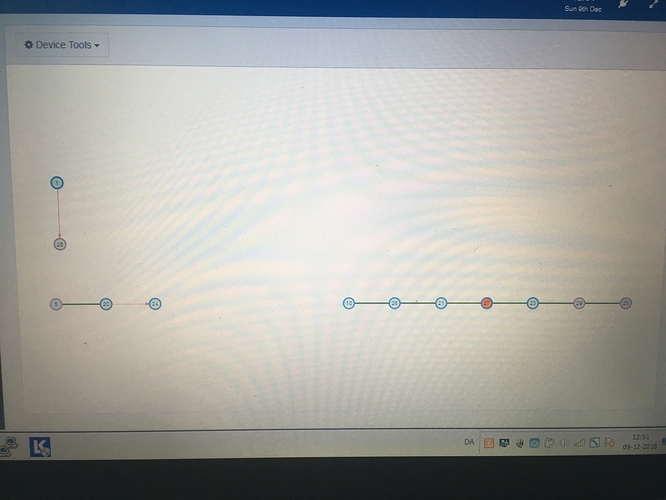 The map shows reported neighbors, not your network if I understand that chart correctly. So it is not a good representation of what your zwave network looks like. So unless you are seeing long delays after a command is sent or missed commands your network is probably fine.

The only way I know to improve your zwave network is to add more mains powered zwave devices. Mains powered devices act as routers in the mesh network and will provide additional paths for messages to follow and improve the quality of the overall mesh network.

I don’t understand this. What’s the difference between “reported neighbours” and “your network”? Surely the network is defined as all the neighbour connections?

Surely the network is defined as all the neighbour connections?

The binding asks each node what other nodes it has heard from. This is what is shown in the network map.

The controller keeps a routing table, which TMK is not accessible through the serial API. This table is generated using whatever proprietary algorithm is in the zwave library used by the controller. The network map is not a routing table… just a way to visualize what nodes each node has reported as “seeing”.

The network map is usually a good indicator of network health, but it may not be accurately showing the true health (bad or good) of the network. The image above is a good example. The orphaned nodes can’t be truly orphaned, or they would be marked as dead by the controller.

How can I make my Z-Wave network more stable, for me it doesn’t look nice ;(

What Rich said… more mains powered devices to build a more robust network, if you are actually having communication issues. Although, this could also be caused by a flaky device. RF is very fiddly, especially with weak signals. Moving a device, a metal garbage can, closing a door, etc. can affect communications.

Hi all,
Looking at my mesh network it seems like all powered items are not connected to each other.
Is that right?
I tried to reinitialize network but that didn’t change anything. Nbr 31 is a aeotec z-wave range extender by the way.

No, it’s not right. There are lines going from node 1 to most other nodes, and then most nodes to node 28, so there is good connection. It’s less obvious in this graphic, but there is also a line running horizontally between all the nodes in contact with node 1 - ie from node 2,3,4,5,6 etc. Due to the way this is drawn it’s not so easy to see exactly what nodes are joined and you’d need to look at the properties to see this.