I have many Qubino DIN Dimmers and would like to turn on multiple of those actuators when the physical wall button of 1 dimmer connected to I1 is pushed.
I would say that could be done via Associations… however it does not work correctly.
It turns on the Node IDs I put in Associations for a moment just to turn them off again immediately.

My question is: When I check the manual from Qubino it stated multiple endpoints for Associations while the ZWave DB only shows one. Could this be related to that and maybe can be solved with a different DB setting?

I tried the Groups 2,3,4 all without real success. 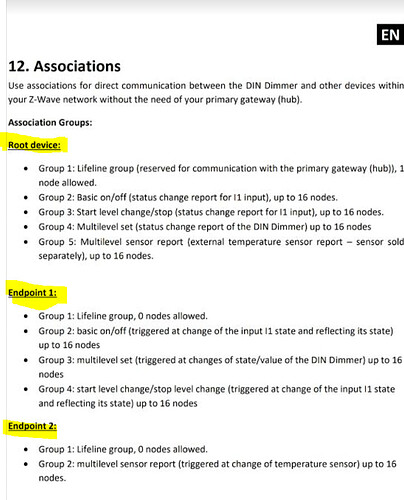 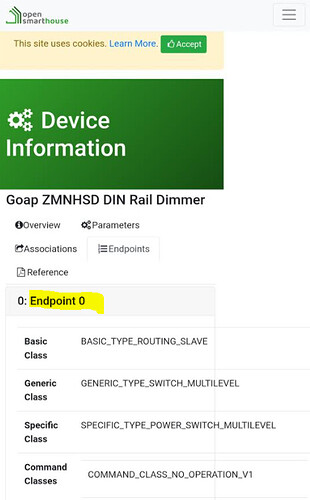 What manual? Perhaps they added groups with later firmware versions. The manual included in the database explicitly states only one association group.

ha
I just googled for the qubino manual
didnt check for which firmware version.
On their homepage they offer only a single manual for that device and unfortunately none for different versions.:
https://qubino.com/manuals/DIN_Dimmer.pdf (page 35)
it does say however:

I also recall they did not even support the firmware update command class. So the only way for a new firmware would be to replace it (I have 16 of those. no good idea, 15 are P2 and 1 is P3 accroding to their “version” label on the device.)

How can I find out if maybe the older versions also have those endpoints and maybe just the earlier manual was wrong?

The earlier manual was probably correct for the earlier firmware versions. I am not sure Association Groups will be the solution you want anyway,

If you want this to happen without openHAB then association groups can do that. Otherwise openHAB rules and possibly groups should be able to do that using openHAB.

well … you think? As I want that multiple actors react on a click on physical click on the wall button I see a problem with:

You need to read the documentation on openHAB concepts and how Item Groups can control multiple Items at the same time.

Nobody says openHAB is easy.