A newbie question: what is the best wired system A-Z list (equipments)while i use openhab as a software?

i am new to openhab . i know about smartthings,wink etc but i want to create a project in my new house with full wired setup. I read about mqtt and relay switches but i could not understand what whole setup needs. can someone explain me how will it look in the final form and do i need some raspi board knowledge? do we have an easy way to plug in all cables to some kind of network switch and then configure from openhab software?

thank you in advance.

Please read some intro on openHAB:

openHAB is not capable of configuring your devices and appliances. It works with existing, working Systems and bridges the gap between systems, which normally don’t talk to each other.

thank you but i did not ask for to configure appliances. let me ask again;

i want to push a button on the wall and lights on\off but there will be no wireless configuration. So , to achieve this what pro equipment should i use?

for openHAB it’s irrelevant, whether it’s a wired or wireless connection. The important thing is, how the interaction will be “bound” to openHAB, meaning how openHAB knows:

So, as openHAB has over 200 “bindings” - interfaces to devices/services/appliances - there’s no easy answer to your question. Either you have to tell us more about your motives, your requirements - or you just browse through the list of actual working bindings and pick a technology that fits your needs:
https://docs.openhab.org/addons/bindings.html

ok i will read your link and ask again…thank you

ok i understand bindings,links etc.i did not buy anything yet. what i am asking is i will use openhub2 and what is the best wired system while i use openhab as a software? what will i buy to install a new wired system ?
i will have motion sensor, switches,water leak sensor etc . i want to learn which path i will choose to have a fully wired setup.
thank you

my experience is - if you have not only your sensors and switches, but you electrical appliances as well (outlets, blinds, garage doors, …) you should aim for KNX. There are plenty of actuators (dimming and Switch actuators for lights, jalousie actuators for blinds, sensors like motion/presence, temperature, gas, …) on the market you can use directly with the KNX bus - and you can integrate them easily in openHAB.

If for some reason (budget mostly) you would like to diversify, I would go for KNX for all electrical stuff (Switches, light, blinds and so on) and you can use e.g. onewire sensors for temperature or water leaking sensors. But be aware - the onewire sensors usually are polled from a device (or openHAB directly) - so if you need water leaking as a realtime, vital appliance you should either stick with a KNX-sensor or use another wired sensor, which is plugged in at the binary input of a KNX binary-actuator. (KNX also has a binary Input actuator which can be used for such things as alarms or other status readings from non-native KNX devices, which provide an relay or a potentialfree interface… the binary actuator in turn can send it’s information in real-time on the KNX-bus and therefore to openHAB for actions. but then again - be sure, you have not only openHAB for alarming, but also another completely independent siren or something, which can also indicate potential danger without being dependent on a running (and functioning!) openHAB Server.

Thank you. Look for knx but please help me build a little diagram.
Wall plug —> cable —> knx relay—> cable to where? —> control with openhub

not really! KNX works completely different compared to the “traditional” setup. First of all, it separates the sensor (switch sensor) from the physical switch (actuator) and the device (wall plug). Second of all - you’ll need a separate Phase (high voltage 230v) from your switchboard (with your switch actuator) to your wall plug.
Now: your actuator can control the wall plug. For that purpose, it receives KNX telegrams via the KNX bus (low voltage four-wire cable). The Sender of that telegram can be your wall switch (Switch sensor) or openHAB - in short some device with access to the KNX bus.

I stole this diagram and wrote some english legend over it… 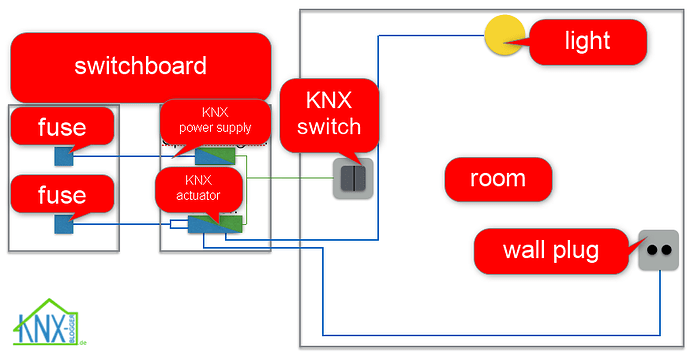 So you connect your wall plug to: N and G simply with your switchboard and L with your actuator. So, if the actuator receives “ON” for Output1 it will switch ist output1 to ON - your wall plug has power. There are actuators which are capable of dimming also (regardless of Edison or LED) and there are actuator especially for blinds/shutters… Best is to find a capable electrician with experience in KNX.

PS: in the diagram, openHAB would integrate on the green lines with either an USB Interface or better yet an IP device (Router or Interface)

Thank you so much man. I wont understand in the first run so need time dig in but lovely tip. Last question where will i connect openhub in the diagram

I wont understand in the first run so need time dig in but lovely tip.

I just added the PS - openHAB will connect to the (green) KNX bus. it then can receive and send telegrams for actuator and sensors.
try here:
https://www.knx.org/knx-en/knx/association/introduction/index.php

Just adding something very important:
KNX devices need to be configured. The only way to do so is to use the ETS software (see knx.org) which has a list price of roughly 1000€ afair (sometimes there is promotion discount available, but don´t expect it to become really cheap).

Even if you have a knx system up and running it is not really possible to go further without ETS, you need
information about the physical adresses and the configured group addresses of the devices / objects.

It is a very mature and stable system, but it is clearly targeted for the professional market, not the home automation enthusiasts. If you have no clue/option how to configure it this can become very expensive quickly.
As an example: Only the device to make 4 channels (lights) dimmable costs roughly 300€, without installation or configuration.
And not every electrician is trained on knx, if it is not done properly it may become a pain in the back as you often have to call (and pay for) the electrician to adjust simple things.

On the other hand: If its running, well documented and you are able to adjust thing I´d say it is the most stable and professional system your money can buy (for more than 20 years now). Integration to openHAB is seamless and it supports devices from multiple vendors due to the standardization.

knx.org provides a small course to learn the basic and you can get a very limited version of ETS (max 5 devices) for free when completing it. This may help you to decide which way to go.
Personally I would again go for knx, but that´s a question of money, time and knowhow.

One more thing then I´m out: Retrofitting knx is not really an option except you are anyhow replacing the complete wiring of a house (which is what I did). You should decide in the beginning what could be the maximum functionality you want to have and get cables installed. E.g.:Even if you do not switch every wall plug in the beginning it may make sense to have an option later. Same is true for blinds/shutters/lights/thermostats/switches/sensors… And make sure you have access to the bus cable in each room so you can install things e.g. motion sensors in the ceilings later. All 4 lines should be properly connected, even if you only require 2 of them. The other to can be used as a power supply, some devices require 30V in addition.

I´d say: Have fun taking the free ETS course, then things will be much cleared for you.
Thomas

That’s only half true!

it it true, you need the ETS for your KNX setup. If your electrician is a good one, he’ll

With that, you can always either call the electrician, if you have some changes (new devices, different programming) or you can buy the ETS software yourself. 1000€ is the retail price for one licence. In KNX forums (like german knx-forum.de) there’s constantly some thread for a discounted version. But yes - that adds up.

Whats completely wrong, is KNX wasn’t aimed at home automation. The opposite is true: yes, KNX is stable and industrial grade (that’s its DNA) - but then again it’s also 100% aimed for home users. (https://www.knx.org/knx-en/knx/benefits-advantages/home-owners/index.php). Not only is there a vibrant community for KNX within openHAB, but also elsewhere - and they’re nearly all non-professional users.

My advice for everyone building a new (smart)home is indeed to go with KNX. Not only, because I use it, but because I know:

all this is in my eyes key, if I want a house, that still functions in 20years from now. I’m not so sure, what homematic and likes, who are on their own proprietary protocols and stuff will do in even 5years. Will they still support their “legacy” hardware? Sonos’ firmware update in April will brick old (>5years) devices for example.
So - yes, it’s a higher price but the TCO over 10-20years will pay.

So, for the TO: the usual way to get to a smarthome is:

and that’s the beauty of decent and well-established systems: Yes, they are more expensive than DIY-stuff - BUT you get support from the manufacturer if needed and the system simply runs flawless - with KNX it should, because it’s decentralized, no central server needed, wich could crash or just stops, if you accidentially load up a wrecked configuration in some distant part of the system.

You are right saying it is for building automation, I agree. But the target group was not home automation enthusiasts (they simply did not exist in that way when the standardization took place) , but professionals. DIY was out of scope (and still should be for parts that run on main power for safety and insurance reasons - but that’s a different topic).

I agree with you on the TCO if you are able to manage certain things on your own and/or have a high level of automation.

And yes, I would invest again in knx, as it is reliable and future proof.

Thank you for your advices. So as I understand from both of you; KNX is great for wired systems and future proof. But as i look for it, its so expensive.
Ok so lets pass this. I watch on yb and so many people buying some kind of chips and add them sensors and instal mqtt protocol, booom! Home automation.
The other option is smartthings or similar.
Am i close to the situation of home automation??

Ok so lets pass this. I watch on yb and so many people buying some kind of chips and add them sensors and instal mqtt protocol, booom! Home automation.

at first: this one isn’t wired - it’s WiFi mostly (I guess, you’re talking esp8266). That’s the exact opposite from what you initially stated: wireless and on top it’s 100% DIY - no standards, no “real” vendors and you need a central server, if you’d like to have some kind of automation on it. I don’t recommend this for electrical Installation. I use it also - but for non-critical stuff like christmas lighting or controlling my washing machine state. I’d never would use something like this for the lights/outlets or blinds in my house.

I don’t have any experience in this, but yes, I read many people here in the forum use zigbee/zwave

Thank you thomas binder. I wish you good day. Aaand black Jack and hookers of course

Go to instructables.com I have a few tutorials on the about automation and integrating simple I/o switches.search jade7272