yesterday i tough about a kind of room control and one topic is still open an i hove no idea on that.

Think about following situation. The room recognizes that an environmental value is not in a desired range. For example it ist a little bit to cold in the room. In addition the room reconizes that it is occupied.
The the room announces that the room is a littel bit to cold and asked if the temperature should be increased. The answer could be a spoken yes oder No from the occupant.

Now that’s a really good use for “AI”

I guess that depends on which platform you use for the announcement and the “talk back”.

I don’t have an Alexa, so don’t know this for certain, but I’m fairly sure I read somewhere that you can push an announcement via Alexa and listen for a reply.

There is a function in HabPanel where an item is populated with a “speech to text” feature, but I think it requires the user to initiate the process.
(I’m sure I played with it in the early days and had reasonable success)

Push yes, listen AFAIK no.
Of course you can program a skill to do that but that’s probably out of scope here.
It might help in dropping the idea (without a solution) that this kind of functionality will be unlikely to work well. People change body temperature (and what they feel about the room temperature) a lot faster than rooms can do.
Oh, and it’s quite spooky if Alexa suddenly starts talking to you without apparently being ordered to do something for you. A lot of people dislike that idea.

A lot of people dislike that idea.

I for one, am prepared to listen and entertain someone’s idea.

Ok I didn’t mean to call it a bad idea. Just wanted to make you aware. As I said that might help in abandoning the idea. Choice is yours, of course.

That is the mind i like. The diskussion is not about world domination - it is abot interacting with the smarthome. And from my point of view the current interfaces getting more and more oldfashioned. @ysc Habbot is a good example for a new thinking, but in my environment it is not really usable.

Temperature is only one example. Think of switching on the light, setting a timer to get a reminder to close a windows start the irrigation …

I completely forgot to mention Mycroft.

That might be a suitable open source and non commercial voice interaction system, that works with openHAB2.

It’s also possible to create skills for Mycroft, so you might be able to leverage that platform to get what you want.

User must give permission to proceed

Think of switching on the light

AI - “It is getting dark outside, would you like a lighting scene set?”

your one or two steps ahead. In my mind is actual only a simple yes and no.

i have to check that mycroft thing, but t be honest. I have about 9 Echo Dots and one google mini in our house an changing is maybe a little expensive

I have about 9 Echo Dots and one google mini

As I always tell people, “Use what you have” (Until it proves it can’t do the job you want)

So we’re back to getting it to say something, which is fairly easy.
But triggering it to listen for a reply is the challenge.

If it’s not possible, there’s no harm in sending feedback to Google with your query, as there “must” be others out there that would like this function

@ysc Habbot is a good example for a new thinking, but in my environment it is not really usable.

I think you can do stuff like this with OrangeAssist - Google Assistant Integration.

My only comment is you’ve actually posted a while bunch of hard problems to solve even before you get to the voice conversation. Room occupancy is one of those problems that seem easy but often ends up being unsolvable, for example.

Simple answer: There are other people at my home. Wife and kids

My only comment is you’ve actually posted a while bunch of hard problems to solve even before you get to the voice conversation. Room occupancy is one of those problems that seem easy but often ends up being unsolvable, for example.

It is true that there are some other things to solve, but my initial idea was to give some advice if a windows is opened. At this point i new that there is in the room.

i have to check the orange assistant.

How to turn on Google Assistant Continued Conversations

Continued Conversations allows you to ask Google Assistant a question and then add follow-up commands without having to say “OK Google” each time.

I wonder if your Echo Dots have the same function?

How to have a continuous conversation with Amazon Alexa

Alexa is about to become the best listener you've ever met.

The problem is, you say:

For example it ist a little bit to cold in the room.

Why is it cold in the room? Didnt you have a setpoint for your thermostat?

The the room announces that the room is a littel bit to cold and asked if the temperature should be increased.

I understand where you´re getting at. But there are something about a “room” telling me, the room is a little bit cold, which I have a hard time comprehending. A “room” can not tell me, if a room is cold or not. Thats what I feel

So in this particular situation, I dont think the idea is good.

What might be a good idea, is to use that kind of “communcating” in situations you can forget. Like switcing on the alarm, when away from home. One day you forget it, and a sensor senses you are way from home. Then the “system” ask you, if you want it to arm the alarm.

I havnt played much with it, but I know Google can do, at least some part of it. Unfortunatly it doesnt work the way you want it to. Cause you have to ask Google to “do something”, and then Google will repond back, asking you for confimation (yes/no). But I wonder if it would be possible to ask in silience. Or having an event trigger to ask the question to Google, and then it will work somehow like your idea.

This metadata will make Google ask you for confimation, (yes/no):
Switch { ga="Lock" [ tfaAck=true ] }
Unfortunatly you have to ask Google do do something first, (like switch on the the frontdoor lock, or turning on the heater…).
But if its possible to trigger the question (event) in silence. Then I think it would work.

I have a talking assistant through my Google Home devices. I set it up from an account named The Apartment. It also takes commands. Looks a lot like OrangeAssist, but I just built it from the Python assistant examples Google has, and MQTT. I have an announcement command, and it says “Broadcast from The Apartment…command here”. That all seemed like child’s play compared to what I imagine room presence detection would be like. Apparently you can broadcast to just one speaker now with Google Assistant, but I haven’t tried it yet. Then, there’s talking back to it. I think the best you could do is program IFTTT to take a text ingredient from Google Assistant, and pass that to an OpenHAB item. It would be clunky. You’d have to respond with “OK Google, tell openHAB No” if you set the trigger as tell openHAB $. Then, Google could tell OpenHAB, and you can continue working on the much harder parts of this. Room presence.

Gives an over view of some options at the start. 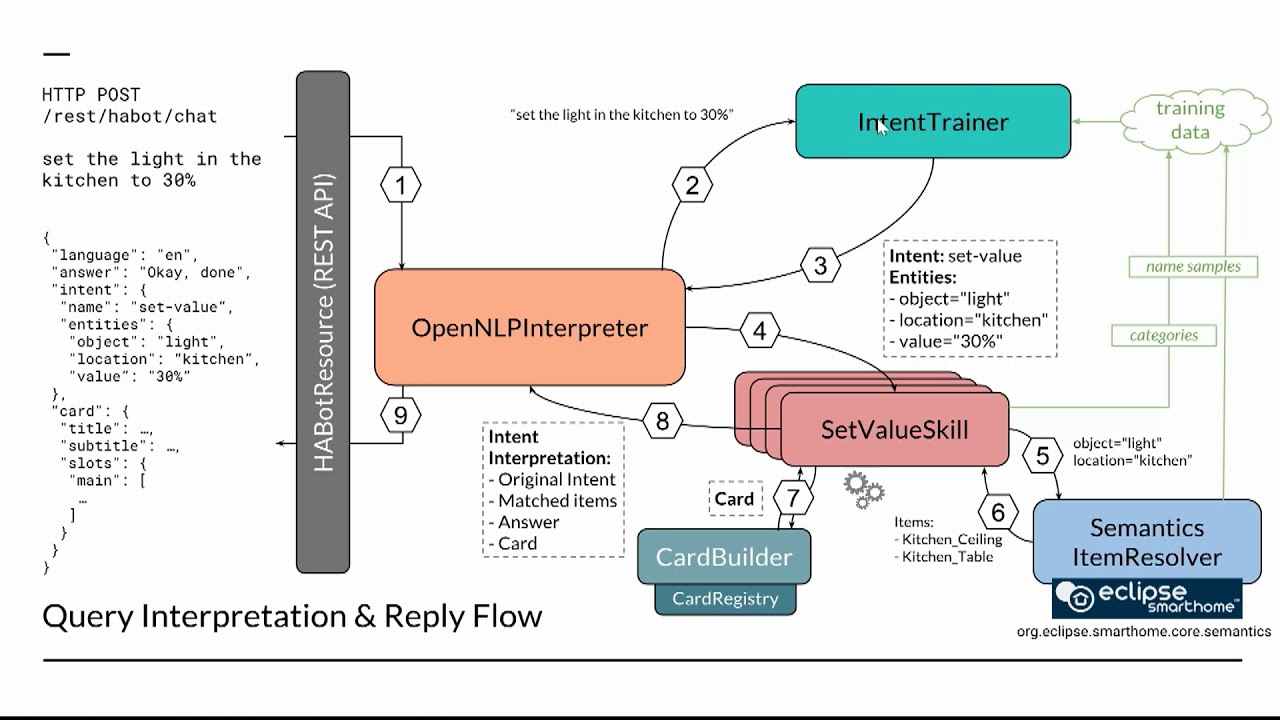