Anyone who connected a regular "old" doorbell to OH?

I will figure it out somehow. Thanks for the warning.

If you are using a AVM FRITZ!Box you will maybe interested in this solution (German).

Thanks
I know this article, but look for a solution without visible external device next to my intercom.
Thanks for sharing, though.

Thanks for sharing.
That looks promising - I will check it out

Here is my solution. Battery operated.

I have a xiaomi door sensor i have always wondered what to do with. These guys are doing it 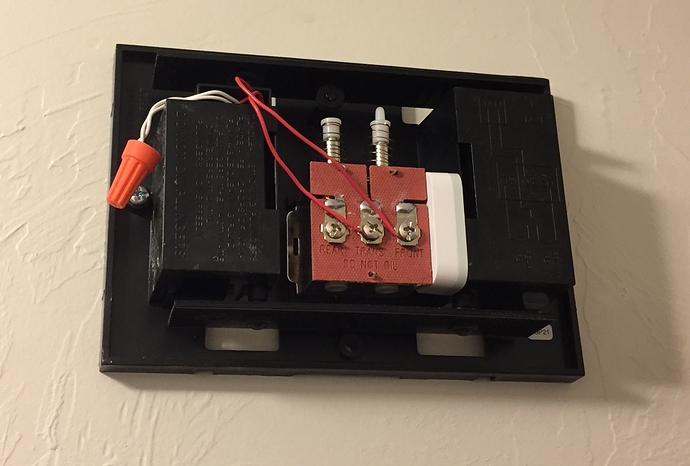 Hi all, Just completed a very simple and effective way to integrate my old style (ding-dong) doorbell with my HA, and wanted to share. I work from home, have my office upstairs, sometimes when I am playing music, I do not hear my doorbell. So I...

Interesting concept. But note it only works “magnetically” for doorbells to use/allow for that mechanically.
And mind the Xiaomi stuff phoning home by default. I guess you could use any (small enough) door sensor though.

I can recomend to use NELLO.io, a simple IOT device which reads the bus signal from almost every intercom. 5 years ago I read out the signal going to the doorbell speaker into a pin on the RPI, but I am more pleased with the nello solution, since I then also can grant accsess to family and friends and it also will work when OH crash. So far I have had zero downtime on the NELLO device !!

Thanks, Kim,
That’s discontinued and depended from a cloud which now i covered by someone else, I heard…!?

I use a similar method with a cheap magneric reed switch and a Fibaro FGK101 Z-Wave door sensor.

In principle, a chime with a solenoid coil can switch a reed switch connected to any sensor without the need for an electrical connection. As you say, an electronic chime isn’t going to work.

My doorbell has both connections to the transformer and bell push so I tried using a rectifier and buck convertor to power the sensor from the 8-20V AC doorbell transformer. Sadly even with back-EMF protection diodes, my experiments ended with failed DC-DC convertors - AA batteries proved easier!

I should try again with a better DC-DC convertor, an ESP12 module, and Tasmota firmware to get both MQTT status and control via relays. You can achieve a surprising amount using config rules without having to compile Arduino code.

I should try again with a better DC-DC convertor,

I had my father in law build that one for me to have it run off the 8VAC, seems he did a good job

Now running a Fibaro Universal Sensor off it.
It has a digital IN (BTW the older versions of the Fibaro Window sensors have one, too).

I haven’t checked into whats going on with Nello.IO, works for me

But I bet there is similar solution from other suppliers out there. But something as important as to open the door you need a redundant system, that why I use nello and OH on RPI, I also use sesame door lock for upstairs (here I only have a single point of failure, so I am lit bit worried that this will fail one day, but then I would be inside the building at least…)

I used this z-wave switch (though sold by a different brand here in Sweden) to connect my doorbell. The doorbell uses a transformer to convert incoming 230V AC to 8V AC (really 11V when measured) which drives the chime. I had to reconnect a bit so the z-wave switch itself is powered by 230V, the 3V output goes to the doorbell button, ant then the chime can be controlled with a dry contact on the z-wave switch. It was the only switch I could find that had both a low-voltage output (the wires to the button are really thin) and a dry contact (to control arbitrary voltages).

An upside is that the bell can ring even if OH is down, but when everything works I can get a notification to my phone, which is what i mainly was after.

I would like to do two things with my regular doorbell:

1.) Turn the sound of the doorbell on and off so it doesn’t ring.
2.) Get notified when someone rings, wether its “on or off”.

Any idea how I could achive both?

Your idea is not a good one because it requires an enormous amount of electrical works to “copy” an ancient way of performing a function.
Doorbells are a particularly nasty example to keep alive instead of moving to a next-gen solution because they need to be powered by a 8-12VAC circuit that you usually have a single one of only (running through the specific power supply and the doorbell button).
If it was a 230VAC that would be simpler.
You need to rewire such that your pusher circuit gets onto an OH-controlled sensor and use another OH-controlled actuator handling the 8VAC circuit running to the bell.

That’s a desperate move trying to keep existing (and not really clever) solutions instead of going for something new, different but equivalent (in terms of the functionality to inform someone has pressed the button).
Better don’t use your bell any more. I for instance play a sound through my OH server’s soundjack where I’ve connected a speaker. Can play a differentsound every time.
But you can think of various other means of notifying yourself such as a wholehouse audio system like Sonos, or why send a notification to your phone ? Make lights blink instead ? Or both ?

Please have a look at

This tutorial will show how I connected my conventional doorbell to Openhab in order to monitor when the doorbell button is pressed causing the doorbell to ring and to be able to mute the doorbell. The latest comes in handy when sleeping durig daytime for example when working in night shifts or having young kids. As I have a doorbell which is working as expected I don’t want to change to much to the doorbell, furthermore I also want the doorbell to keep functioning when openhab is not working/o…


It does al you want. The description is a bit outdatet for the mqtt configuration since OH 2.4 and also installing nodejs is going much easier with the newer raspberry pi’s than I used in the old days.
I currently extended my own setup to play a bell sound via sonos and receive notifications via telegram when someone rings the conventional doorbell
Belgadon (Belgadon) January 19, 2020, 4:22pm #47

Thank you. Actually I was thinking in the same direction and I really see your point. BUT until now I couldn’t come up with a good alternative/solution. The sound of the bell can be heard in the entire house, but I don’t have smart speaker in every room nor every floor. Same goes for lights. Smartphone notification aren’t good either: What’s when I am without my smartphone, or when it’s silent or when the grandparents are babysitting.

Maybe I start thinking in this direction again.

@mlommers Thank you. I will also have a look at your link.