Thanks for posting the method to access apcupsd - it worked right out of the box for me.

For my setup, I simplified it a bit and created a single Thing with an associated Item for each of the parameters I’m interested in for the UPS (example for STATUS below). I monitor several parameters and each one can be done at different time intervals (or triggered by rules? but not there yet).

But clearly parsing the full output of apcaccess is what’s needed for a solid binding so thanks for sharing.

I’m a newbie to OpenHAB 2 and am very slowly working with understanding how it functions and would you guess that getting my APC Back-UPS XS 1500 up and running on it was the first ‘thing’ I decided to add to my system.

Well the good news is that I can get the ‘Basic UI’ to display the data coming from the UPS, but I have yet to find a really nice interface that might even offer a way to set all of the variables used in the ‘rules’…

Also trying to learn about the various interface options for OpenHAB as I envision a button i press that takes me to a panel that maybe has some cool graphics that shows percentage of load, battery life expectancy based on load, changes color when on battery power and shows time left. Maybe a way to silence the alarm if possible…

Some, ok maybe all, of what I’m hoping for may not be possible, but I’m learning and still hunting…

Hi Roi, i used the instructions on github and finally got it work - thank you.
Can you help me understand why i get this messy representation of data on paperUI? 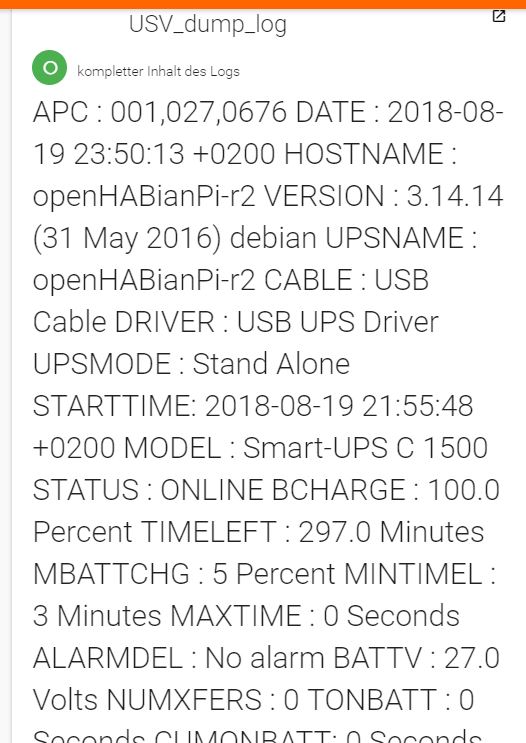 Hi Karl.
Is it possibel to get the temperature of the UPS? When i run apcaccess int the console, i can’t find this value?
Thanks and greetings,
Markus

Thanks for all the great ideas and scripts in this post.

I couldn’t get my head around how the python script worked, but I did find a solution using the Exec binding.

this rule then splits the string into separate variables

This gives me a loginfo output of :-

Thanks to @rlkoshak for his help yesterday with splitting strings, I’m still not entirely sure how to implement his parts idea, but I’m working on it

Services Status
How to: integrate OH with a Texecom alarm system
Have done Openhab 2 file in rules or items or script
Help with setup/rules in openHab for Momentary buttons
Use information in human readable language in Habpanel
Event in rule if public power failure in the house
MDAR (Stuart Hanlon, UK importer of Velbus hardware) February 21, 2019, 10:51am #27

I think you need the ITEMP value

using the rule I created, it would be split no 30

To apply some of the lessons on that other thread here.

Since we know that calling split doesn’t actually change the original String, there really is no need to split the String over and over. Instead split the String only once and store that in a variable (I call it parts) are reuse the variable.

Next, to remove white space from the beginning and end of your String, there is a handy method called trim.

Finally, the String::format really isn’t doing anything for you in the Float::parseFloat calls. Since you are using %s this is the same as calling Float::parseFloat(LOAD.toString) and since LOAD is already a String this is basically a noop.

There are some other minor concerns about using parseFloat here as well. parseFloat returns a primitive float. Unfortunately, especially on an RPi, the use of primitives can greatly increase the amount of time it takes to load and parse .rules files. Because you are not actually doing anything with these variables that requires them to be a primitive float, it would be better to let it be a Number. By default the Rules DSL uses BigDecimal to represent numbers so let’s just use that.

So the above code would become:

Not only is the above more efficient, which isn’t really that much of a concern here, but it avoids duplicated code which is a bigger deal. When ever you see a bunch of lines that look the same or groups of lines that look the same with only minor difference, it is usually worth while to try to centralize the duplicated code into one place. In this case, we centralized the split.

Theoretically you could also centralize the trims with something like

But I don’t know the String that is being parsed well enough to know if that would cause problems.

The part referencing parseFloat is not something I would expect the vast majority of OH users to know and understand before now. The only reason I know it is because of my extensive experience helping other users.

yet again your wisdom shines through.

BigDecimal is a new feature, I’ll try that and see what happens.

without the .split(’\n’).get(0) part, the string returns the value after the ‘:’ AND the label for the next item.

so I was trying to get the value from a string like this :

Which I concluded was actually…

without the (’\n’) split, the value battv appears as

So it’s not just empty space I’m looking to get rid of, but the next bit of text too

Regarding the parts technique you suggested, I really couldn’t get that to work, either with this rule or the BBC Weather one.

I’ll give the exact rule you’ve written a go as you’ve taken the time to create it.

Mainly because I’m really interested to see how it works.

without the .split(’\n’).get(0) part, the string returns the value after the ‘:’ AND the label for the next item.

Makes sense. The trim won’t work then. You should update your comment though because it reads like you are just removing the last \n from the string.

There might be a more self documenting approach to this. What if you put the label and value into a Map. Then you can pull the values out by label instead of the arcane get(15) which only makes sense when you know what the 16th line is.

Regarding the parts technique you suggested, I really couldn’t get that to work, either with this rule or the BBC Weather one.

I’ll need to see the errors because I use this approach routinely.

I’ve just pasted your new rule in with only a slight edit to the last line, and this is what the openhab.log shows…

OK, there is white space after the label. Use

One thing to pay attention to here is the progression we took to get to the final Rule. Rarely does anyone, even very experienced programmers, build Rules like this the first time around. As with writing essays or books, the first version is rarely any good. But through iterations of refinement we go from long Rules with repeated code to shorter and more concise Rules that are easier to maintain.

The process should always be:

And, just to show another iteration of improvements, it occurs to me that the text can be processed by a Properties Object.

You would replace the part where we parse the String with a Java class that was created for processing Strings and files in this format.

This is one of those places were you would have to be a Java programmer to know that these utilities are available to you, which brings up another point. It is often valuable to revisit Rules you’ve written in the past because as you gain experience and learn things, you may discover new ways to accomplish the same functionality in a better way. Steps 2 and 3 are ongoing and never stop. I can’t tell you how many times I’ve written some of my Rules. I think my presence Rules were rewritten at least six times.

@rlkoshak, I tried to set this up today, but the Properties are not working out for me:

Don’t really know what the problem could be, but perhaps the Properties().load reguires a format with “=” as a separator, instead of “:” (at least that seemed to be what they were using in an example I found).

Anyways, I stepped back to the rule posted by @MDAR, changed split(’:’) to split(’:’, 2), so it works for strings containing colon as well.

Properties should accept either. From the Javadocs:

The key contains all of the characters in the line starting with the first non-white space character and up to, but not including, the first unescaped '=' , ':'

Properties are not working out for me:

You’ve provided absolutely no information about how it’s not working for you or if there are errors so about all I can say is “bummer.”

You’ve provided absolutely no information about how it’s not working for you or if there are errors so about all I can say is “bummer.”

I’m on my phone and apparently it’s truncating that last line because I still don’t see that line.

That error is almost always caused by a type error.

Nothing in the line that appears to generate the error shows anything that might be a type error.

Split the line up (i.e. build the StringReader first and then create the new Properties and then call load).

But I cannot query the results:
[ntime.internal.engine.RuleEngineImpl] - Rule 'APC UPS String splitting': 'get' is not a member of 'Object'; line 19, column 29, length 20

in my script line 19 reads:
APC_LineVoltage.postUpdate(results.get("LINEV"))

I also tried replacing get with getProperty, but no luck. I think I will just go with the previous solution using java.util.Map.

It looks like a type problem. It should be. Try forcing the type.