I have been using openhab for a while now in a relatively small setting.
One thing that bothered me for a while was my Logitech z906 sound system.
I already had it powered by a sonoff device, but always had to actually press the button to start it as well as hook up a device with spotify to it.
That obviously had to change, thats what we are here for after all

Since my raspberry is sitting right next to the controller of the sound system, I wanted to use it for playing my spotify playlists. Raspotify is a great Spotify Player that utilizes Spotify Connect to controll the Spotify application on your Raspberry.
https://github.com/dtcooper/raspotify

Since I also wanted to controll the player with openhab I also implemented the openhab spotify webconnect api which allows you to fetch a lot of information from spotify as well as controll your player.
https://community.openhab.org/t/openhab-integration-to-spotify-web-connect-api-player/31610

Thanks to dtcooper and pmpkk for those two great tools!

Hacking my Logitech z906 to make it an iot device

The Logitech z906 does have a IR-Remote, which I unfortuantely lost, but it can of course also be controlled with the buttons on it. So i decided to pop the controll panel open and look at what is inside. I found a simple pcb with multiple buttons, all connected in the default gnd to pull up configuration. After a little bit of testing i found, that i could trigger the buttons with simple transistors.
I now use a Wemos D1 mini with a small MQTT programm to switch those transistors on my command.
With one click in my sitemap I can now power the system, turn it on, set the raspberry as my current device and start the music.

Here is how the “hacked” control unit looks: 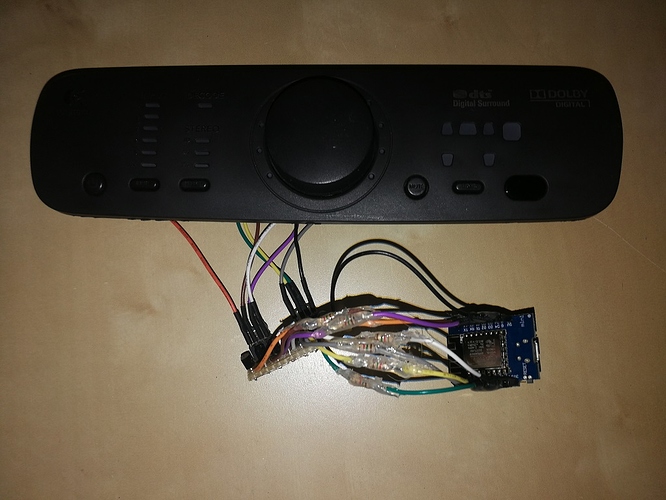 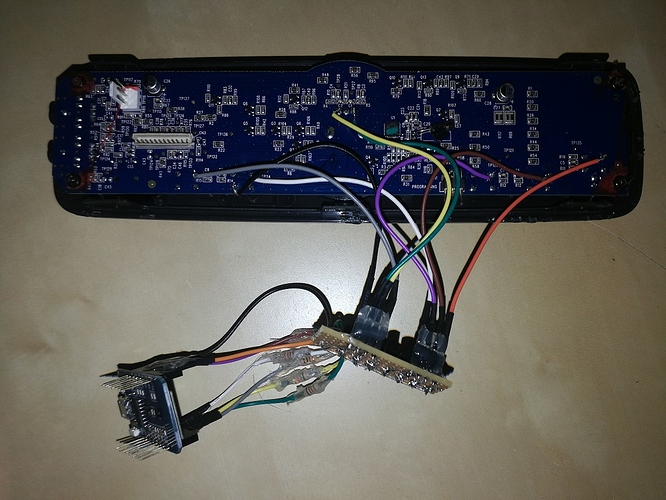 This is the first project I post on here, since I am quite happy with it. Maybe this gave some of you some inspiration. I am happy to answer any questions you have

Did you also try the Spotify binding? It’s not yet released, but available in the market place.

Not yet. I will definitely look into it!

What about sound controle?
Are you able to detect how loud the volume ist?

I planed to at first, but the wemos does not have enough pins to monitor all the LEDs. And I wanted a quick and easy solution for this project.

Since I was mostly able to see the box from my couch just being able to control it was fine for me.

Just stumbled upon this and also other projects/reverse engineering efforts. This is a nice approach, but has the potential to damage the console and also doesn’t really provide more comfort than simply attaching a IR Led to the D1 Mini and sending commands that way.

Other approaches are simply man-in-the-middling the serial interface to the amplifier, however so far I haven’t found anything “ready to use” for ESPs and implementing it into Home Assistant as example. The protocol seems to have been reverse engineered almost entirely already, but I’m not a programmer to implement this correctly