Hi!
What is best practice for generating Last Update value?

One for every item. It is a lot of work, and I think there is a better way.
Someone want to share?

To get at your last update value in a rule you just:

However, if you want to put the last update on your sitemap you need to do it like you are doing. However, you can save a lot of work if you set up persistence, use some groups, and a foreach.

Okey, I’ve tried around a bit. But have not got it to work, yet…
When I tried your code. The Desinger gave me a lot of error:

My Log files shows this:
Error during the execution of rule 'Update timestamp': Could not invoke constructor: org.openhab.core.library.types.DateTimeType.DateTimeType(java.util.Calendar)

You got any idea what’s wrong? I’ve been searching around, but to me it seems like I have two problems:

Ok, I’ve narrowed it down to 2 errors:

For me, the first one is the biggest problem. I can’t figure out whats I do wrong!

Assuming the rule DSL uses the org.openhab.model.script.actions.BusEvent class for the postUpdate implementation, there are only specific combinations of types that are supported. They are:

I’ve run into this issue frequently with JSR223 Jython rules, but it may apply to the rule DSL as well. It seems to be consistent with the error messages you are seeing.

Thanks,
I got it to work. Here are my working rule, for further reference.

Which persistence is best to be used for Last Update data?

Can anyone think if a loop like this could be used to identify any item that has NOT been updated in the last hour and notify me?

that has NOT been updated in the last hour and notify me?

I’m using the expire binding for that, add a expire="60m" to your channel definition, then the item state gets UNDEF if there has not been an update, then trigger a rule on UNDEF to send a notification.

Thanks I will take a look at that approach…

Here you can see my roof temp sensor has stopped working a few days ago and so it’s this situation that I am hoping to get notified about. 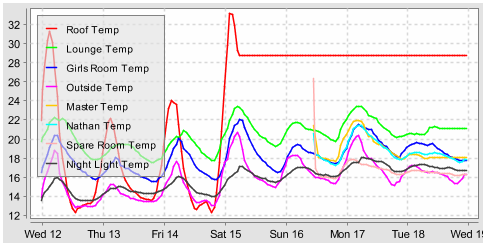 that I am hoping to get notified about.

That is exactly how am I using that.

I’ve installed the Expire binding and am adding it to some sensors now… However this still feels like I have to write a rule per item I want to check? Is there any way to check all items in a group and report any that have not communicated for an hour?

Is there any way to check all items in a group and report any that have not communicated for an hour?

Yes, but as far as I know the items have to be all of the same itemtype.

@sihui Thanks am trying to set this up today…
Another thought is that your example rule will only fire when an item in the group is updated… So if something has gone wrong and none if the items in the group are being updated then the rule will never be run?

Maybe it needs to be a time based check every 10 minutes or something?

You are allowed to have Groups of mixed Item types. Don’t expect the group to take on a sensible .state of it’s own, but here you don’t care about that.

You can have more selective rule triggers

nb. the expire binding won’t be ‘started’ timing at system boot time, so this method will miss sensors broken before you start.

Depending on technology, some bindings will set UNDEF by themselves if communications fails.

Maybe my definition of my group is not correct?

His write up is a couple of years old so it might be out of date but I’ll keep reading to see if I can figure it out.
His rule triggers do seem to be different in that the trigger if “Member of” and not “Item Changed”…

Alright then… It looks like this version of the rule works better!

Yup, your original version looked at the Group’s .state which was indeterminate, as no aggregation function had been defined.