New to the community but long time openHAB user. Long story short; for a while I’ve been tinkering on an app for Tizen based smart watches. I.e. Samsung Gear and Galaxy watches. It’s a stand-alone application using the openHAB REST api to fetch and display a sitemap on the watch. It works very much in the same way Basic UI does, except that it doesn’t support all sitemap elements.

Is there anyone here who’d be willing to take it for a test drive before I try to publish on the Samsung app store?

If so, I see two alternatives.

You can of course install on a watch from the source, but that requires tools from Tizen Studio and Samsung developer certificates which is a bit cumbersome to set up.

What I’m mostly interested in, if you choose to accept the challenge, is if there are problems with specific sitemap configurations. I.e. are there configurations that breaks the app. The repo README lists sitemap elements which are at least to some extent supported.

I’m also very curious about the behaviour on LTE devices. Since there’s no authentication support in the app it can really only be run on local networks, but I have no idea how LTE devices route the traffic.

The app has mostly been tested against openHAB 2.4, but should work with 2.3 and 2.5 as well. Due to changes in the REST api earlier versions won’t work. It works fine with the openHAB demo setup and of course with my own setup, which isn’t overly complicated.

A special thanks to @stefaanbolle for beta testing before release.

Looks good so far, is it also possible to connect via myopenhab? In my understanding it should because it also supports basic authentication via https. Cannot test currently but will give it a try as soon as possible.
Thanks for sharing!

It will be possible to connect via myopenhab in version 1.2, which is currently in the Samsung review process.
The version (1.1) currently published in the Galaxy store doesn’t have authentication support.

Ok, that explains why I saw your implementation for basic authentication in your repo

I will report my feedback!

Hi, I have also created a tizen app for galaxy watch. It is currently in samsung review and in beta testing. You can checkout this video how it looks and what all functionality is there.

Darn, I have an older Gear S2 (which runs Tizen 2), so I guess I’m out of luck. I can’t blame you for starting your support at Tizen 3, but if you want to test it on Tizen 2 then I’d be happy to help.

The beta app won’t install, with this error message.

“You are not authorized to test this app or the test period has expired. Try using this app once it is officially released in Galaxy Apps.”

@rpwong my bad, this beta version is for closed group. If you are ok to share your samsung Id. I will add it in beta testers.

The app is published now. Note it is paid app. If interested, check out here: http://apps.samsung.com/gear/appDetail.as?appId=YmsEUlYJ1v

Great app Amin! Thanks for developing!

using openHAB for quite some time now, I found now your Tizen app in the Samsung Galaxy store. I installed it on my Galaxy Watch and tried it. I’d say a really great user experience given the limited display size!

Unfortunately I’m not able to switch items. It displays correctly the current item status (i.e. light on or off, room temperature, …), but I cannot switch the state. On the lower part of the watch display it shows a crossed-out sync logo (see photo).

Any idea what the problem could be? 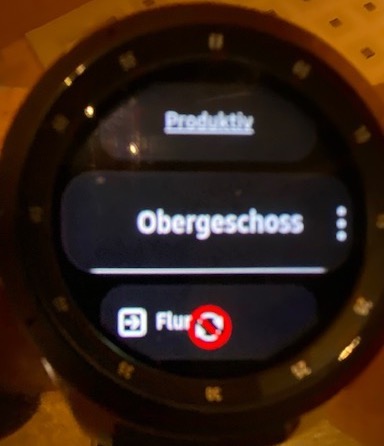 Glad that you like the UI, even though updates are not working properly.

The crossed over sync-icon you’re seeing indicates that the SSE connection fails or can’t be established. Pressing the icon reloads state and tries to establish the connection again.

Has it always behaved this way or has it started happening recently?
Does it send the updates to openHAB? I.e. is this purely a refresh problem or does it fail also when sending updates to openhab?

There’s a few things you could verify/try:

I actually made an effort to support Tizen 2 as well, but it turns out the rendering engine on Tizen 2 behaves in strange ways. To make matters even worse there also seems to be some compatibility hacks in Tizen 3 and 4, making the UI render differently just by setting the supported version to 2.

I really couldn’t find a way to support both 2 and 3+ in feasible way so I had to give up those efforts.

No worries, and I hear you about the differences between Tizen 2 and 3. I helped Amin develop his app for Tizen 2 and it works, but he couldn’t get remote access to work securely.

One of these days I’ll upgrade my Gear S2, but I’ve had it for over two years and the battery life is still fantastic. And to be honest, having openHAB on my watch is a low priority. I actually had some controls set up via Tasker and IFTTT before, but I never used them.

To make things work correctly in tizen 2.x I have not used any third party lib in my app for UI or anything.

Thanks a lot for quick reply and advise! I did 2 things: 1.) restarted OpenHAB Services and 2.) restarted my Galaxy watch. Since then it works perfectly! Items can be manipulated and showing their real time status.
But still facing one issue, not sure whether this is based on watch behaviour or could be solved within your app. Connection to OpenHAB server is broken when watch is connected to my iPhone via Bluetooth. When I disconnect the Bluetooth link, it works again. Seems that the watch tries to use the Bluetooth connection to the iPhone instead of WiFi to connect to OH server.

I’m almost exclusively using the bluetooth connection on my watch (Gear S3 without LTE) since it consumes less battery. I’m however connected to an Android phone, not sure if that makes any difference.

Can other network connected apps access the network properly over bluetooth? E.g. any of the browsers available in the store.