It’s taken me some time to get this all working, so I hope this is useful for someone else!

The room has one of these fan/light combos on the ceiling. The whole fixture can be controlled via the included infra-red (IR) remote, which looks like this: 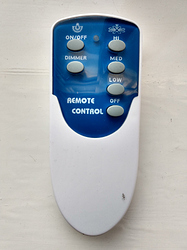 To enable automation of the fan/light I got a Broadlink RM4C Mini (branded as BestCon).

Install the python-broadlink package directly from github. I used the following commands:

The following methods will connect the RM4C Mini to the local wifi network:

I recommend trying the first option first, if only so you don’t have to make a Broadlink account.

Important Only get the RM4C Mini connected to your wifi network - DO NOT allow it to connect to the cloud.

Whilst in the python-broadlink folder in your terminal, move to the cli folder.

Open the broadlink_discovery file, and alter the top line so it references Python 3:

Try to discover the RM4C Mini. Replace the IP address with the one for your RM4C Mini device:

Hopefully that works, and you will get something similar to the output below:

Note You can now switch to SSHing into your Raspberry Pi, and continue following the steps below.

Setup is as per the installation instructions at on github.

Connected! Move this terminal or command window to one side - we’ll call it Terminal 1.

Two methods again. The first uses broadlink-mqtt and should be the easiest. However, this sometimes results in errors (usually as a result of issues with python-broadlink), so the second method uses the base commands from python-broadlink. Both routes will ensure you end up at the same place!

I have a separate file which just contains the bridge Thing to my Mosquitto MQTT broker:

Saved into the transform folder:

I hope this helps someone, and would be happy to hear about more efficient or elegant methods! I’m especially interested in any solutions for the dimmer button. When pressed, this reduces the brightness to a minimum level, then increases it again to maximum. Each press is a decrease or increase, depending on which part of the curve the light is currently on…

Edit 23/08/2020: Added section in teaching codes to use base python-broadlink commands, as some are having issues with teaching via broadlink-mqtt.

Edit 04/08/2020: Added notes regarding what device you should be performing particular actions with.

Edit 31/05/2020: Managed to setup the device on the Wifi without needing the app! Instructions updated.

Edit 30/05/2020: broadlink-mqtt has now implemented Last Will and Testament (LWT) messages. Added the default configuration into the thing and item descriptions.

Instead of a Setpoint speed picker, we’re now using a Selection picker. This allows mapping of friendly names to the speed numbers. 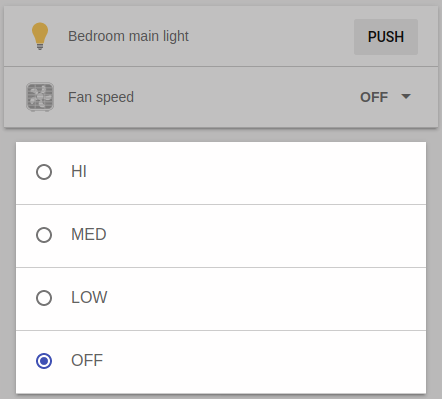 Note that the speed numbers have been switched round, where 0 = HI and 3 = OFF. In the Android app the numbers are shown in ascending order, top to bottom. I wanted HI to appear at the top, and OFF to appear at the bottom, hence the order in the Selection. As a result, the transformation file bedroomfan.js has had to be flipped around:

Same as for use with the Selection picker.

Switch with mappings and no more transformations

By simply changing the channel type for fan control from a number to a string, we no longer need to use a transformation!

Hi
Do you mean to do it on the openhabian with putty?

Whichever computer you installed python3 and python-broadlink onto. It must be a computer that you can easily change WiFi networks on…

In the first place, thanks for your post… I`m having problems at the moment of dicovery, when it run the command, it send me this error:

Any suggestion about that? I think I follow all steps but I have that problem.

I’m no expert, but I do know that I only got everything working using Python3, after having issues using Python2.7, hence only using Python3 in my example.

If this issue continues I would suggest having a look or searching through the python-broadlink GitHub pages to see if anyone else has experienced the same thing.

Sorry I can’t be of more help!

Thank you for this excellently detailed tutorial.

Unfortunately, I was not able to connect my RM4 Pro to my wifi network using the command you described:
broadlink.setup('myssid', 'mynetworkpass', 3)
[I filled my wifi network credentials].

The RM4 Pro continues to blink slowly and stays in AP mode connected to my Raspberry pi.

Any idea how I can solve this issue?

Any idea how I can solve this issue?

I don’t unfortunately, other than to unhelpfully steer you towards the python-broadlink project and see if they can help.

Another option is to click the history tab of my first post (top right of my post), and move back a couple of edits - I used to have instructions using the broadlink app which you could try and follow.

Thank you for the idea.
Pressing the “pencil” button next to your original post doesn’t show the history.
I think you are the only one that can see your writing history.
Can you please send me a copy of the history?

Can you please send me a copy of the history?

Important Only get the RM4C Mini connected to your wifi network - DO NOT allow it to connect to the cloud. The following worked for me:

Many thanks for sharing the history.
I was able to connect the RM4 Pro using Broadlink’s app and I made sure not to add the device into the app after it connected to my wifi network.
I then disconnected the RM4 Pro from the cable and waited at least 10 seconds.
Next, I reconnected the cable and tried to run the next step in terminal:

However, I received this error message:

The script can’t find the python-broadlink module - are you sure you installed it fully, using python3?

I think I installed it correctly with the commands you included:

This is the terminal output i got when I tried again:

My version of broadlink_discovery has this as the first line:

I’m no expert, but I think this means that it will try to use python 2 if that’s also installed. If so, try changing that line to:

Saving, and trying the

It’s possible that I have the python-broadlink module installed for both python 2 and python 3, which means that I wouldn’t have got the error you’re showing. If that’s the case, I need to update the guide!

Wonderful!! Changing the first line to python3 worked, as you suggested

By chance, do you know a good tutorial for learning RF codes and how to set them up to work with the binding in the link?

Wonderful!! Changing the first line to python3 worked, as you suggested

By chance, do you know a good tutorial for learning RF codes and how to set them up to work with the binding in the link?

Unfortunately not - I don’t use that binding!

I’ll try to find another way, and if I don’t find one, I’ll try the MQTT solution in your explanation.
Many many thanks

Hi @hafniumzinc
I want to try your full MQTT solution.
Can you suggest which Mosquitto package I should install for your solution?
On the Raspberry pi’s “add/remove software” I see a few Mosquitto packages:

Oooh, no idea! I think I just used the terminal:

This post shows how to install Mosquitto Broker on a Raspberry Pi. The broker is primarily responsible for receiving all messages, filtering the messages.

I’ll just do whatever you did

Hopefully it will will work with no problems