Just found this post, i used to be on the BT forum but like you know they shut it down…

I have had a Myhome installation for 10 years now and very happy with it, during the Christmas break i did a major overall:

So far so good, but with all this changes, there are new “problems” also:

1- i have some F411/U2 that give problems in particular configuration eg: address A0PL1 and A0PL2

when PL1 turns on PL2 turn off and vice versa; no idea why, with other address problem goes away eg: A0PL1 and A0PL14 gives no problem, is this problem known?

2- I have (and had) some PIR sensors connected to F428 but not sure what is the best way to configure it with virtual how do you do that? Contact state? Aux? Cen?.. 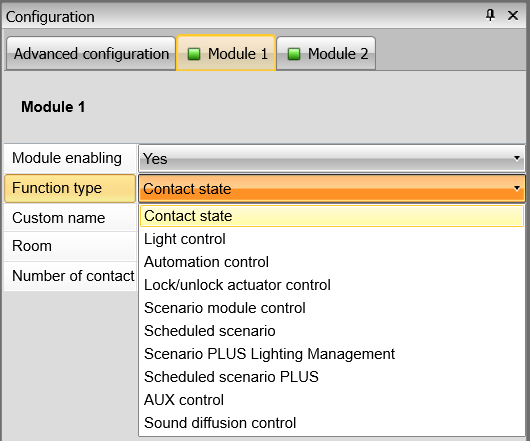 It worked really good in the past, but it was configured in conjunction with an “spare”actuator on the same address qs the F428, and with a scenario in the MH200N, so when the contact of the F428 opened that actuator went to ON the actuator connected to the light went on for 5min when, when the contact of the F428 closed again the actuator went to OFF and the light went on for 30sec. But i’m sure there is a way to do it without this second actuator.

Any advice on that?

Off course i can turn off that light manually that works.

I will probably find some new issue in the coming weeks

hi @jpcolin,
i also use myhome, my installation is about five years old and i have very most parts configured virtually (alarm is not possible to configure virtually).

i will try to give some information from my side:

when started i also realized problems with A0 - back then i thought it could be because of my presence-detectors (bmse3003) and so i just do not use any PL in ambient A0. (although the bmse3003 are configured only as cen)

and thats your second point: i did not like the long switch times (min 30 sec) for the presence detection. i configured all as cen and back then i had scenarios in my mh200n that switched timed-light on for 10sec, or whatever i wanted. i never used a “spare” actuator - not possible for a swabian

and thats your second point: i did not like the long switch times (min 30 sec) for the presence detection. i configured all as cen and back then i had scenarios in my mh200n that switched timed-light on for 10sec, or whatever i wanted. i never used a “spare” actuator - not possible for a swabian

Normally the Cen should just send the command light ON once to switch the light ON.

no, becaus i cannot see a reason for that. the presence detector sends a cen-command when motion is recognized. i use this cen-command to start a cenario that switches timed-light on

Normally the Cen should just send the command light ON once to switch the light ON.

correct, but wrote about “aux1” that switches the light on. normally i thought it should not be a problem if aux1 only recieves ON (and not OFF) - but the cenario you postet to switch off is simple and should work - even more when you say you can switch off manually (of is off-command an aux-off)?

no, becaus i cannot see a reason for that. the presence detector sends a cen-command when motion is recognized. i use this cen-command to start a cenario that switches timed-light on

Ok so you use a scs detector. could you share your scenario for detection?

my mh200n is quite empty, not one cenario left. at the moment i use a (very dirty self programmed) jython programm to monitor the btcino-bus and send any own-command to it. this i cannot share because too complicated to get this work (i am not a programmer and proud that i finally got it work for me). i hope soon will be the new binding able to work with cen-commands, contacts, … then many things will become easier.

but i will check if i find a old backup of my mh200n - perhaps i can send you a cenario from there, standby please…

ok i found something. the cenario for the timed light is quite simple: 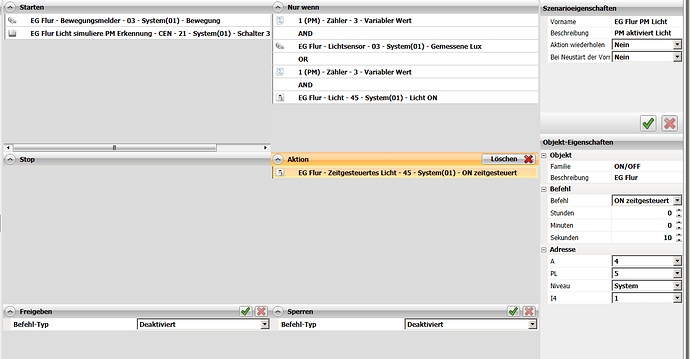 I used to use “mysweethome” to monitor the bus activity but it seems i can’t download it anymore?
Anyone has an easy solution to monitor activity?

I was able to install it on Windows 10. However, I’m not able to connect to the MH202 because it asks for the open password but I don’t know where to put it in the connection settings. Any hints?

PS: regarding your problem no.2 (the motion sensor connected to F428) I found this configuration in MH202 and is working properly with scenarios (I use it also with the timed light object): 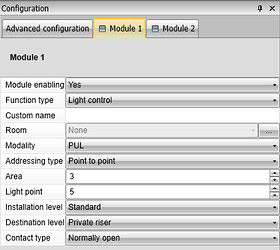 Of course I configure the item as a contact in OpenHAB to just get its state.

I found this but the download links don’t work anymore.

For problem2 i would be curious what scenario is ascociated with this configuration.
Could you share it?

actually I downloaded it yesterday (after you post). I would attach it here but .zip files are not allowed (maybe you could try to download it with a vpn).

Here are two scenarios using the sensor (is a light sensor connected to F428, A3 PL 5):

and here used is a condition (i.e. dark outside) so that if the motion sensor (81) is ON a timed light is switched on. 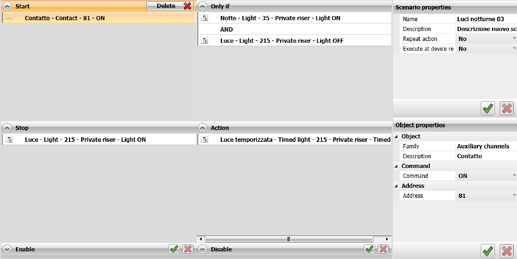 Did you find out something about your problem no. 3? (the light that won’t switch off with the “hour” condition). I have a similar issue.

Did you find out something about your problem no. 3? (the light that won’t switch off with the “hour” condition). I have a similar issue.

No still no luck! so weird! testing at the moment.
New scenario, with other light and it worked. strange that this partucular light does not switch off

thanks for the scenarios.

Anyone with a MHServer1 here?

Does anyone have solution for the bus monitoring?

As suggested by jpcolin I tried to use MySweetHome but I can’t connect to the MH202.
Here are the screenshots:

i think this is because you cannot establish a secure connection (no password)
so you can open your hm202 in your myhomesuite and allow the ip-address of your computer that wants to connect to the mh202. 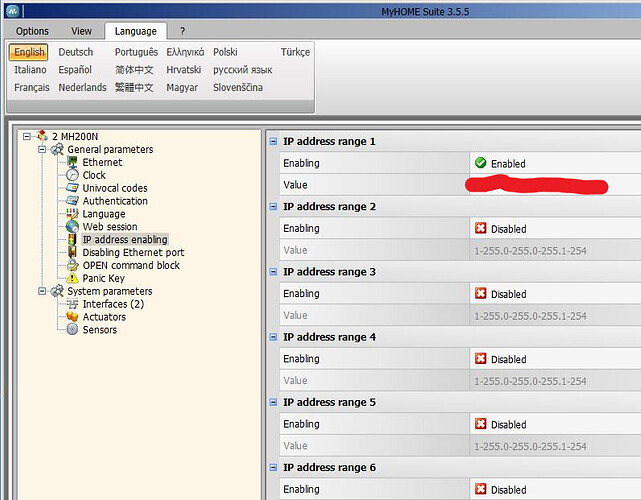 actually in my configuration page “IP address enabling” in not present…maybe it is not a feature of MH202. 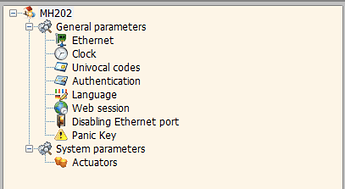 I use a tool called jclientopen which is a java app that allows you to monitor all openwebnet traffic. Have a search, the site I got it from originally seems to have changed (myopen)…If not I can probably zip it up and post it somewhere!

Apologies for sounding slightly off-topic but I cannot seem to be able to find the my Suite Home software anywhere any longer on the internet. Since it has been discontinued and is deprecated there is no obstacle either for it to be uploaded and shared.
Would anyone be kind enough to provide a link so I can download and install it?

Up until now I’d been using the MH200N software with my old laptop, but since the old laptop died, there’s no way I can get it to show the scenarios properly on my new laptop (I’ve tried all possible screen resolutions and configs possible on Win10) and I am stuck with my BTcino hardware.
If you can provide the myHome Suite soft. as it is “more recent” by comparison to the MH200n soft, it should allow me to get hold of my .plant files so that I can then further integrate the system with OpenHab.

Thank you in advance,

actually I’m not sure it has been discontinued. Besides, you can download it here: