Complete removal of Node-Red and all files

How do I completely remove all node red files for a clean install?
Long story short, I’m just starting out using Node-red and have no flows running yet. i have however managed to install node-red-contrib-ui_j instead of the node-red-dashboard.
unfortunately i cannot remove node-red-contrib-ui_j as it has something active all the time. I’ve tried for hours to uninstall this package with no success.
every cmd ive found and used for removal has failed due to ui_tab continuing to run on every flow.
Ive figured a clean start would be the easiest way of solving this for me.
Im not great with command lines but if some one is able to provide the correct procedure, ill be able to carry it out.
TIA

Maybe you should try to stop node-red first

After node-red has stopped you should be able to remove the contrib.

Do you mean that when you try to remove this using the palette manager it tells you that there is a node in use?

Try using the “Node Configuration” tab in the Right Side bar. 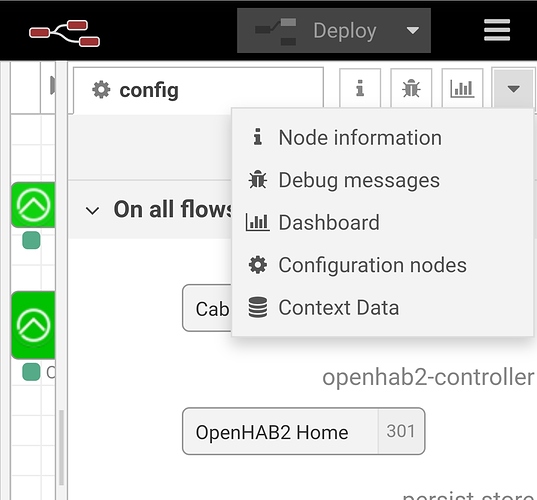 This will tell you where the remaining active nodes are in your flows.

Once removed, you’ll be able to completely remove the whole set.

I understand the idea of cd into the node red directory,but not entirely sure on the correct command line to do so. I have tried stop-node-red and that does stop it, I then tried soo many versions of uninstall/remove contrib. (Everything I can find by googling my issue) Then rebooting the pi. It’s still always there. Apparently it saves something in the user directory for node red that keeps bringing it back.
One post I read said to just delete the file that contains the contrib-ui_j node. I also dont know how to find that and/or delete it.

On the right side bar I have been to “configuration nodes” and deleted everything there. Theres 2, one mqtt server and one ui_tab. I double clicked both and deleted them. it is ui_tab that is the reason I cant just delete the whole package in pallete manager as I cannot disable it here, even after deleting it from the one flow I have open. I will however look into this again shortly to see if I have missed something. Thankyou.

Unfortunately, that is where I was deleting ui_tab. Once deleted, I went into pallete manager and selected remove node-red-contrib-ui_j. Warning pops up saying it will continue to use resources until nodered is restarted, click remove. I get failed to remove so I click view log and the log has very little info that is of use. Just the time and what is was trying to delete.

it may have been due to the ordeer i was doing this in.
I dleted the ui_tab in node red under the node configuration menu.
Then used node-red stop in cmd
Then attempted to remove node-red-contrib-ui_j. with a couple of commands and each time it came up saying file or directory doesn’t exist.
for no good reason at all i next typed “npm install node-red-dashboard”, it then installed a few more packages.
i used node-red start, then went onto the node red GUI and was able to now remove the contrib-ui_j from the palette manager successfully.
I had tried all of this previously but must have used the incorrect order.