After searching community forum I decided to create topic for my question. I want to install LED profiles for general - main lighting for my apartment. I am doing my apartment renovation and I am near electrical installation stage. Want to be sure about lights wiring installation and hardware. 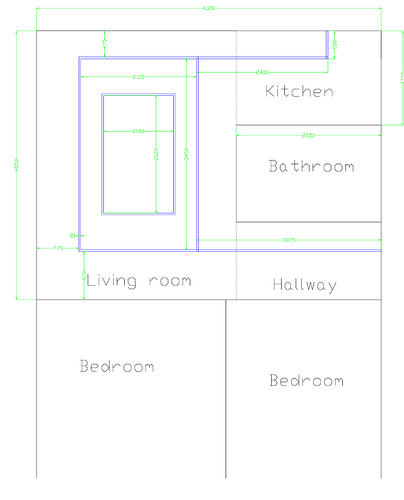 For me would be enough four control channels, one for kitchen, one for hallway and two for big and small rectangles. I want to use 14w/m white LED strips at least, dimming function can be controlled from OH only, including wall switch for turning on and off, soft start and soft stop feature also would be nice. I intended to have three double wall switches hard wired (3x1,5mm2) straight to electrical cabinet and four LED segments each, mentioned above, hardwired (2x0,75mm2) straight to electrical cabinet. I have plenty space for hardware. Big rectangle LED perimeter is around 11 meters, expected power consumption would be 160w. So I need 200w led driver or split rectangle in half and us two 100w drivers.

I am amateur at electronic, so i prefer to use well documented examples or ready made budget components. If I have to, I will probably deep dive into arduino, but still I have to determine what I can do with arduino or will it blend with OH.

My first idea was to use Xiaomi aqara wall switches with aqara motion sensors. Use usual led driver to power up LED stripes. Fulfill soft start with Soft start - stop LED module or From allegro. I found this one dimming solution, but I am not sure because project is for HA system I will have to figure out how to control it from OH. Then I don’t think I can use aqara light switch ??? Can I still use soft start-stop module??? How many amps I can push through those mosfets? Use Active cooling?

Found other solution with DALI led driver. Then I have to use simple push buttons instead aqara.

Considering other solutions like DMX or KNX I didn’t found any example I could adopt.

Feel free to turn yours suggestions or examples.

As it uses mqtt it’s very easy to control this multi channel dimmer from openHAB, too

The VMB2LEDDC modules are 8amp per channel 500Hz 12vdc to 24vdc PWM dimmers.

You’d need a VMB4DC to control a pair of VMB2LEDDC

(FYI, you can drive multiple VMB2LEDDC channels from each VMB4DC output, if you need more than 8amps of dimming per channel)

These can be programmed to respond to any of the Velbus modules.

The Glass Panels also have thermostats if you want a include your heating into zones.

The latest Edge Lit glass panels have fully programmable RGBW LEDs on an 4 sides.
(Each side can be programmed separately)

Additionally, each edge lit panel has a output trigger, that can be used to operate device locally.

So these can be used when retro-fitting.

This video needs remaking, as I originally created it to show an installer what is possible.

What I particularly like about the Velbus range is that it doesn’t need any kind of central controller or internet connection to work.

Which in turns means that openHAB2 can very easily monitor and operate the Velbus hardware.

With the very latest version of the binding offering fabulous control and interaction.

Programming Velbus is incredibly easy, with the free software, which doesn’t have any kind of licensing or quantity restrictions.

I wouldn’t dive into Arduinos.

There’s a couple of choices:
I use ZWave Fibaro FGRGBW-441 actuators in my house, they can do 6A per channel/12A in total.
This one is WiFi based and rather new so no experiences to share. It doesn’t give max. amps but looks similar to my Fibaros. Control is via MQTT which can be cumbersome particularly to beginners. See here for someone who did this.

Finally, there’s also a number of systems to come with a bridge that there exists a dedicated openHAB binding for such as the Milight (which is WiFi) and Hue/Tadfri/… ones (which are ZigBee).

Worse come to worse, you can always install 12/24v amplifiers / repeaters. The ones I use allow up to 360w per amplifier, and they can be daisy chained; essentially giving you an unlimited length of strip controlled by one dimmer… I have access to these 10amp Solid State relays that work really well as PWM repeaters.

You can, though what I linked to is much more cost effective and you can get rgbw ones as well.

I will order Marcus suggested Shelly RGBW2 for a test. I want to see how it performs dimming, see if there is noticeable stepping between brightness levels and flickering. Suggested amplifiers is also good idea, but I will have to buy one to see how fast it is.

Lot of good information about led dimming and components found on quinled.info. If I won’t like shelly rgbw2, I consider second option QuinLED-Deca.

The amplifiers are almost instantaneous. I use them in my business, and have never had an issue with latency.