I have openHABian 1.4 running on a RPi 3. I need to add Zigbee functionality. What is the best option for a dongle? One of the cheap Chinese CC2531 sticks? Raspbee?

I would currently recommend the Telegesis ETRX3 stick as it’s getting the most testing at the moment.

Thanks for the response. Looks like that will run about $50.

I’m not sure if you mean that’s too much?

Another option is the gocontrol husbzb-1 which includes ZWave as well (I’m assuming you’re in the US as it’s only available there). It’s probably a similar price, but include both ZWave and ZigBee.

Sorry, I wasn’t clear. It is unfortunate that the dongle is as expensive as it is. I already have a Z-stick, so the husbzb-1 won’t help much. I’ll probably just get the Telegesis stick. Thanks.

The TI dongle should be ok, but I personally don’t use it other than for occasional testing to make sure it still works. It’s a little fragile and some people have problems. You also normally need to buy the programmer and download the code etc - it sometimes results in problems.

Still - it can work ok, but personally, I would recommend one of the commercial devices - they might cost a bit more (but maybe not so much once you’ve bought the TI programmer and the stick), but I would say they are more robust and probably more reliable.

This is the only place that I could find in the United States to buy this item:
https://www.semiconductorstore.com/cart/pc/viewPrd.asp?idproduct=50564

Is that what I am looking for?

There is also a version that comes with 8Mbit Flash. I have no idea what that is for or if it would be of any possible use to me at all.

Is that what I am looking for?

I have no idea what that is for

. Don’t worry about this version - I don’t think it’s used.

This is the only place that I could find in the United States to buy this item:
https://www.semiconductorstore.com/cart/pc/viewPrd.asp?idproduct=50564

Just as an update. I purchased this item from that site, and it works great.

What’s the latest status on this matter in 2020?

Which USB stick to pick for the RP or Synology-based server?

what should I get for OH

I am using Zigbee2mqtt, so this doesn’t answer the question directly. However, with Zigbee2mqtt, the CC2531 is considered an ‘entry level’ adapter that can only support fewer number of zigbee devices (in capacity, processing power, and signal strength). I used to use one, and eventually replaced it with another adapter that supports external antenna https://www.zigbee2mqtt.io/information/supported_adapters.html

Once I’ve replaced the adapter, the signal levels reported by all devices improved significantly for me.

OpenHAB’s Zigbee binding supports different adapters to zigbee2mqtt, so the point I’m trying to make is that whilst you could go for the cheap CC2531 first, simply because it’s super cheap, you should eventually replace it once you’re up and running, unless you’re happy with the performance that is.

I eventually caved in and bought a husbzb-1, and sold the z-stick. It has been working very well. I would suggest that as a solution, even if you don’t currently plan to need z-wave. It will be there if you need it in the future.

I eventually caved in and bought a husbzb-1

If I had to do it all over again, I think that is what I would probably go for now:
https://smile.amazon.com/dp/B01GJ826F8/

I eventually caved in and bought a husbzb-1, and sold the z-stick. It has been working very well.

Can you tell me how you did this? I have a HUSBZB-1 that I was using for HomeAssistant. However, OpenHab does not seem to have this as an option…

When I go to add a Zigbee Bridge, these are all that pop up… 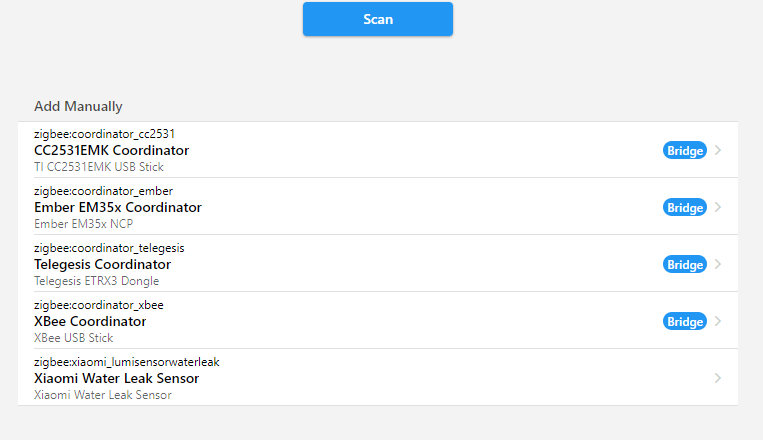 I believe the HUSBZB-1 is based on the Ember EM35x.

Thanks, that eventually worked (with a reboot)

I have the HUSBZB-1 “online” using the Ember EM35x Coordinator

Is the CC2652RB based Slaesh stick also supported directly by OH?

I’m guessing the non-response was a “no”? Or did you get a PM response?

I also have the Slaesh CC2652". I guess I need to stick with setting up Zigbee2MQTT?