Hello everybody,
is there anyone who is able to create an oH2 binding (v2.5) for “Ecovacs DEEBOT Ozmo” vacuum robots (Ozmo 920, 950 …).
Or has someone integrated these models into openhab and can briefly describe the solution.
I tried various suggestions from the web (https://community.openhab.org/t/ecovacs-deebot-integration-e-g-d900/88588) , but nothing worked.
Many solutions from the web relate to Pyton3.
I run openHAB on a Synology DiskStation. I can install Pyton3 on it, but I haven’t managed to install the corresponding libraries yet.
It would be nice if someone could help me.

I’ve had the same issue with getting mi Ozmo 950 to work with openHAB 2.5.
But I finally got it working with a fork of the sucks-library and some Python code.
But you’ll need some kind of MQTT broker, since I’m publishing the events from my ozmo to an MQTT Broker and subscribe to this topics in openHAB.

I prepared my code also to include a docker-compose file, since most of my apps run in docker, but you don’t need to.

The easier way is to use docker, since you only have to provide some variables and the docker does the rest

I have (not 100% complete) instructions (including things, items and sitemap examples) in my repo:

Contribute to FloSchl8/openhab-ecovacs development by creating an account on GitHub.

I’m planing to write a more detailed tutorial, especially on the Python only part.

Thanks so much for this.

I dont get the install method at all though - I must be a proper newbie not having used docker before or python.

I run openhabian on my raspberry PI. Any pointers on the easiest method of install in very simple terms?

I’ll try my best to give you some directions

If not, there should be enough tutorials on the internet on how to get python installed. Search for something like “linux install python 3”. Note that it mus be some version 3.x.x

Next create a new folder where the source code will be downloaded to (e.g. under the user home folder “deebot”) and switch there.
Easiest way again via terminal

Now download the sourcecode to this folder.
(If you download the *.zip file you’ll get the files in an additional folder, just place all the stuff [main.py, requiremets.tyt and so on] in the above created folder)

Now you have to install additional packages I’m using with python.
First create an so called environment with python.

This should also create a new folder named env in your current folder.
Now this environment must be activated. This is done with

If this is succesful you should see an additional “env” in the terminal at the beginning or end of the line.
Now to install the required packages type

This could take a few moments since a few files have to be downloaded.

After this is done you need to set some configuration values.
This can be done in the main.py file or via environment variables but I recommend environemnt variables.
In openhabian this should be doable like in other linux systems with

Which variables need to be set can be seen on github in the docker section of the readme file.
Some values just exist and don’t need to be set and I should probably define some default values for them.
mqtt_client_bind_address doesn’t need to be set (at least I don’t in my environment). For verify_ssl set “True” and device_id can be some random identifier (I use a 32 character long string)

The MQTT Broker should be the inclueded mosquitto broker.

Now everything should be ready to get some values from your Deebot. Just type:

and you can use the provided things file (don’t forget to modify the values) to get your deebot into OH.

You are a star! Excellent instructions thank you! I will give this a go shortly and let you know. Appreciate your time

So tried tonight and no such luck sadly. Eveything went smoothly up to the last bit. After typing:

I get the following in the console:

Also, I setup the MQTT broker but unsure if it is working? If you know, is the below correct?

Thanks again for your time

Is the environment still active when you type ‘python main.py’?

This needs to be active so python knows where to find the module ‘deebotozmo’.

Just like before type in the folder where the ‘env’ folder is ‘source env/bin/activate/’ and afterwards ‘python main.py’

I think the broker should work, but I’m unsure since I use a seperate Moquitto instance and only use the bridge like in my example things file.

However… I don’t get any values displayed… the cursor just blinks with the following error displayed:

During handling of the above exception, another exception occurred:

Looks like connection issue? I defined all the variables in the environment as suggested so not sure what this error is referring to

Thanks once again for your help, will be sure to buy you a coffee in your link once I am up and running of course!

HI nice to hear that you made some progress.

I’m not at my main PC right know so I’m assuming things now and will invastigate tomorrow.
I assume somehow it can’t connect to the Ecovacs API.

Can you provide me at least your country and continent? I’ve read about some issues in the original repository about some combinations…

Thanks man appreciate it

Thanks for your help yet again

Is it worth trying physical variables in the main.py instead? I’m not sure how they’ll be written there. If like php I assume everything is within double quotes “” ?

sure you can type it in there using double quotes “”.
You can also change the logging level to log.level = logging.DEBUG to get more information.

I just published a new version which also handles status updates when you trigger it with the button on the bot.

Hey, thanks for all your patience and help. I have installed your latest files. Do you mean you can read the status of the deebot in your latest update?

Adding the variables directly into the main.py seemed to do the trick. I am getting at least some sense now and must be close. See below my output:

Now I do see one error in there as below. Dont know what that means?

Other than that, a question. How does this script keep running? Does it run automatically? or everytime openhabian is rebooted, do I need to do the whole “python main.py” again?

I assume a CRON would be needed to keep it running in this way?

Thanks again in advance!

Spoke too soon… in addition to the above, cant seem to read the data in OpenHAB

No data being displayed in openHAB…

nic eto see that you made some progres.

The update fixes that the status of the robot wasn’t updated if you pressed the buton on the robot to start cleaning. It would stay in “docked”.

In the ‘main.py’ file in line 161 there is a function call vacbot.setScheduleUpdates() which schedule ssome backround threads to refresh livemap, status and components.
The default values are (in seconds) livemap_cycle = 15, status_cycle = 30, components_cycle = 60.
You can change this values to your liking, so when the script is running it keeps ruinning till you end it.

again. So you have to ensure that this is executed on startup. I think writing a small .sh script and executing it with cron on boot should do the trick.

I didn’t find the error you encountered in my logs. Did it happen more than once? It occurs mainly when some requests timeout or too much data is send. If it was only one time I wouldn’t give too much on it.

I remember I had some difficulties at first too to get the values to display in OH.
First check if all your MQTT broker values are correct.

I also noticed the value get only updated when they change. So start your robot and watch for any change.
You can also look in the events.log file in openhab userdata/logs/events.log file if something changes.
For example, currently my robot is docked and doesn’t do anything. My script still publishes any few seconds the values to the broker but in the vents.log nothing is shown because nothing changed.

I have had a play with settings and the error has now gone. However still no data being read by openhab.

I have set the main.py variables as follows.

I have things file as follows:

Both are online in my paperUI as seen in image:

Settings in the mqtt.cfg file in the services folder:

I have ensured the broker thing matches the thing already added in paperui. See details: 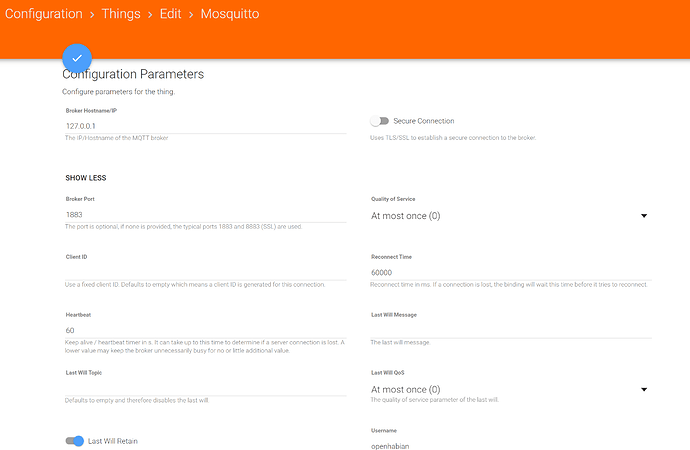 Yet nothing displayed in HABPanel under the items or basicUI sitemap, any further ideas?

Tried your suggestion and had the robot working while trying values. No luck.

to me everything looks fine and unfortunately I can’t see any errors or why OH just doesn’t show some values.

Can you open the “Vacuums” tab in PaperUI and push some changing values e.g. for the battery and watch if they change in the UI and if something shows up in the logs?

So a long journey but got there eventually… just about.

Thanks so much for everything so far. Final hurdle now…

Getting the commands to work is puzzling. I created a widget on habpanel to send the “Clean” or “CleanPause” commands to the deebot. Now, they work for a small time before stopping altogether. Clicking the button in habpanel to “Clean” does nothing after a short while.

The error recieved in the openhab.log is:

In the widget no “false” is being sent… this is my code:

Wierd one really as when openhab is restarted all works again for a short period before the issue happens again.

EDIT: What I realised is the broker actually seems to stop working until openhab is restarted again. It is not just the commands. I checked the python script is running still and publishing to the topic in SSH, and there is no issue here. Openhab simply stops updating the data from MQTT.

Is it possibly the keep alive or LWT settings? Any suggestions how you have configured your MQTT broker in openhab?

just a question because I’m not skilled in python use…
I Installed it on ubuntu 20.04 with openhab 3.
I used python3 command instead of python…it works great but if i close the shell windows it stops to work.
How can leave it working without leave shell windows opened?
How can I launch it at startup?

thanks a lot for your help.

Hello,
I have tried to get the library running via docker-compose, unfortunately without success.
The Docker installation aborts with an error at “preparing wheel metadata”.
Error:
ERROR: Could not find a version that satisfies the requirement numpy==1.19.4
ERROR: No matching distribution found for numpy==1.19.4

Does anyone have an idea what I am doing wrong?

Thanks in advance
Peter

i ran into the same problem. it seems that the system is missing some requirements to compile the nymphy library - as it was successfully downloaded before.

I’ve attached the full log, but think the following may be the root cause - without any idea to fix it. docker.txt (12.9 KB)

Im running on the lastest openhabian on an raspberry pi4B.

Thanks for your support.