I’m finally giving up on this one.

After slowly migrating to openHAB2 I was able to migrate all my zwave devices except this one:

I deleted it from the Things section, added it again.
I tried to reinitialize, no xml file is created.
I excluded it, did a hardware reset, included it again. Nothing
I bought a new device (!), tried to include it … no xml file created.

Device was already on the stick, included in openHAB1. 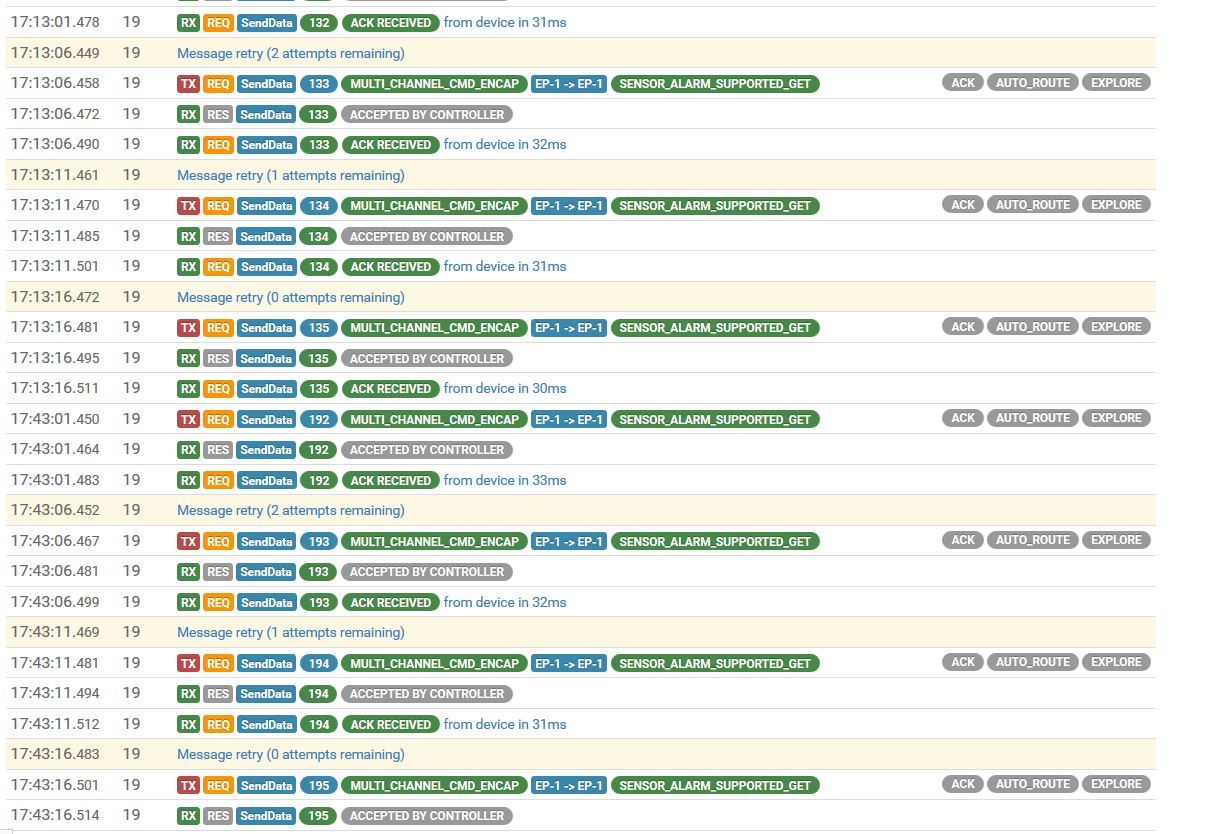 Any ideas? After one week of trying I’m out of ideas …

Edit: Device is about one meter away from the controller

Please provide an unfiltered log. If you filter it to just this node, then we loose all the receive data messages which don’t have the node number listed as we don’t know this until much later…

From what I see though, the device probably doesn’t support the ALARM_SUPPORTED_GET message, so we can easily update the database to solve this if it’s the case.

Thx … hopefully I picked the right section from my huge debug log:

It looks like the configuration to stop this happening on EP2 was already done. I’ve added it to EP1 as well so let’s see if it solves the issue…

let’s see if it solves the issue…

Unfortunately not.
I grabbed the latest openHAB2 snapshot #603 from this morning, zwave binding is now 2.0.0.201611201812
FGBS001 Fibaro Universal Sensor node number is now 21.
Excluded the device from the controller, hard resetted it, included it again:
Still no xml file is created.
In Habmin under “Things” the screen shows a green node with “Node initialising: STATIC_VALUES” and there it stops.

The binding hasn’t been updated yet as I didn’t around to doing it last night.

The binding hasn’t been updated yet as I didn’t around to doing it last night.

Okay, sorry for being impatient, will wait a few days longer …

I should get it done tonight

I grabbed the latest zwave snapshot binding and the xml file was created instantly:
http://pastebin.com/7aYLGgZj

BUT: I still don’t get any commands from the device.

I linked items to all four channels (sensor_binary and sensor_alarm) and I can see they get added in the events.log, but if I physically trigger the input there is no command change.

Could it have something to do with those three messages in the device database?:

Could it have something to do with those three messages in the device database?:

Probably - at least some updates seem to be using BASIC so this will need to be set - I’ll take a look tonight.

Some time left to take a quick look?

Anyway, I’ve just updated the database so I’ll merge this tonight. Let’s see if it helps.

unfortunately week of the same another next week

Sorry to hear, hopefully that earns a lot of money in your pocket

Thanks a lot for updating the device, will try as soon as it makes it into the binding.

hopefully that earns a lot of money in your pocket

Sadly it never seems to work out like that ;)…

will try as soon as it makes it into the binding.

It should now be included…

Okay, will update and report …

It should now be included…

… but unfortunately it’s still not working.

Maybe I just make a dumb mistake because I assume I’m not the only one who is using the FGBS001 with openHAB2.

I know you have a busy week so I will patiently wait until you get into this.

All was done with debug enabled, log can be found here (node21):

It looks like it’s at least receiving the data for the binary_sensor -:

The alarms don’t seem to be encapsulated in multi-channel, and as there’s no channels in the root, they won’t do anything -:

I don’t know if this should be sending these alarms in multi-channel encap?

What do you think it’s meant to send? eg if you press a button (or whatever is linked to the input) what do you think should happen? Should alarms be sent to the endpoint, or the root device. I’m not sure if you’ve looked at the log yourself in the viewer, but a lot of stuff is sent to the root…

I’ve only looked at the first log so far…

What do you think it’s meant to send?

My assumption was that in openHAB2 it should work as a switch for sensor_binary EP1 and EP2.
So I defined it as: 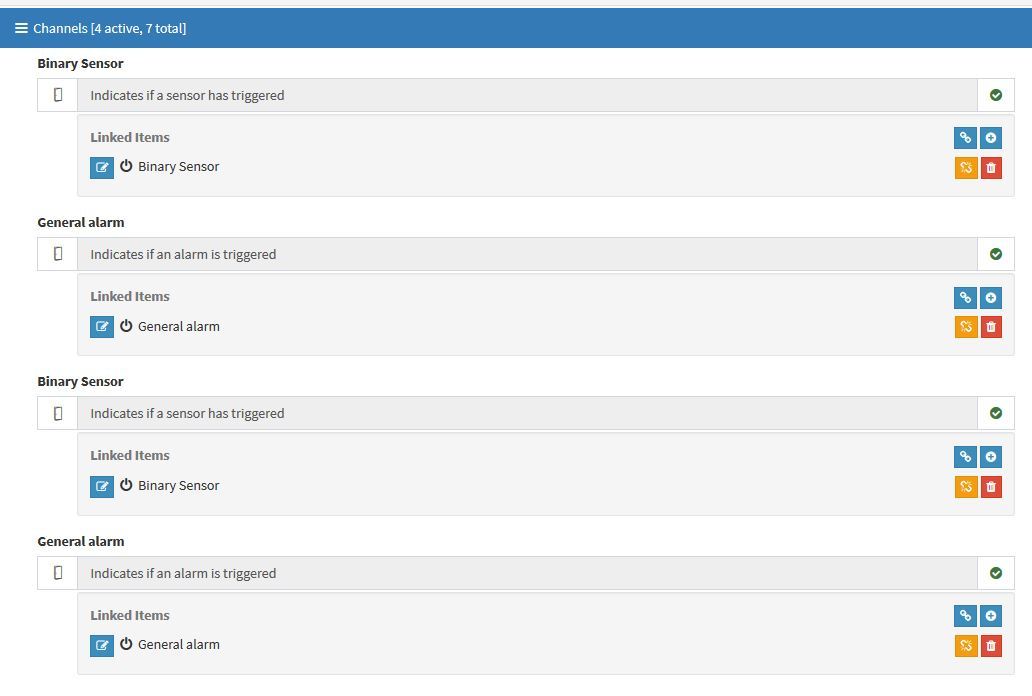 But in the event.log nothing shows up and on the sitemap the two switches (actually four) are always off.

The general alarm was only meant as a test if something is coming in on this channel.

Ok - so these two channels still look like they are being sent. sensor_binary channel is however defined as a switch (as you correctly assumed

But in the event.log nothing shows up

. HABmin seems to think the channels are linked to items - are you sure the items are switches (sorry - I’m sure you are, but just double checking as everything seems to be working with these channels - except for the ‘small’ point that they don’t seem to actually work!)