EDIT: Corrected the steps in the Ansible script that install the TOTP extension.

In response to MobaXtrem Terminal - software recommendation and because I needed to learn about Apache Guacamole anyway, I decided to take the plunge and install and play with it. This post has my notes and hopefully enough information advanced users of OH can follow to set up remote access to their machines behind an HTTP proxy.

Apache Guacamole is a free and open source server that you run on your LAN and connects to the machines on your LAN (VNC, RDP, SSH, and some others) and exposes them through an HTML5 web app. So imagine bringing up the terminal for your openHAB server through the browser.

One of the key features is that it is clientless. You don’t have to install anything on your LAN machines except for the Guacamole service. If it’s already configured with SSH, VNC or RDP, Guacamole can connect to it with no additional changes. 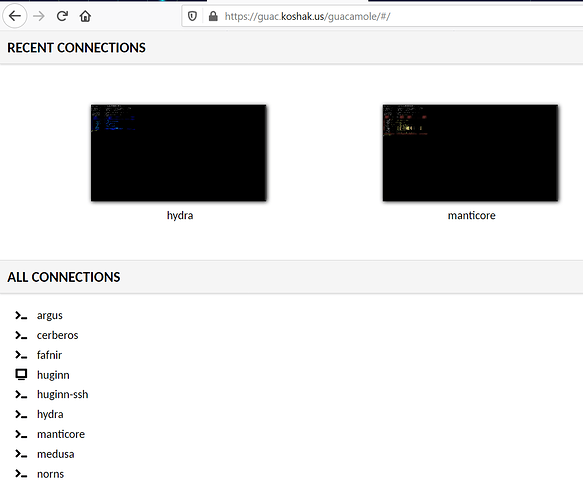 Each entry in that list is a separate computer, with one computer supporting a VNC and an SSH connection.

Installing Guacamole is somewhat of a pain. I’ve included here my Ansible role that installs Guacamole using Docker. I already had a PostgreSQL server set up for NextCloud so I’ve reused that container for Guacamole as well. MySQL is also supported if you prefer.

One of the gotchas is that there is an SQL script you need to generate by executing a script in the Guacamole container and execute on the database container which makes the whole thing a little awkward to get set up correctly.

Here’s the Ansible role I wrote. I’m already running PostgreSQL so pulling and starting that is missing from the role. I can post that if you need it.

The above creates a user to run Guacamole under, though I found only guacd can use it. I need to figure out how to make it work. Then it starts guacd which is really simple. Just pull the image and start the container. Then we create the database and user for Guacamole and give the new user the right permissions.

The next task pulls the Guacamole Docker Image and runs the script that generates the SQL script that will initialize the database followed by executing that script on PostgreSQL. I was able to cheat a bit because my PostgreSQL is running on the same machine as I’m deploying Guacamole. So I executed the scrip right on the Docker container.

Configuration is pretty easy but there are a lot of options so I suggest reading the Guacamole docs. I have one VM running a desktop version of Ubuntu with VNC configured and the rest of my VMs and RPis are headless with only terminal access. I configured a connection for each.

There is a place to enter the host keys or you can mount a known-hosts file to the container. If you supply neither than Guacamole will not check the host keys on SSH/SFTP connections.

I’m using pfSense with HAProxy which I documented at Remote Access: pfSense + HAProxy + LetsEncrypt. The Guacamole docs have a full configuration for nginx and Apache as well if that’s what you are using.

Hopefully this is enough to get you started. If not ask questions.

I do not recommend exposing anything on your LAN directly to the Internet, even through a reverse proxy, unless you are knowledgeable and experienced at configuring and monitoring these systems fro attack and responding when they become attacked.