Help translating HABPanel in your language!

Continuing this effort, I am very pleased to let you know HABPanel is now fully localizable and it will use the setting you configure in Paper UI (Configuration > System > Regional Settings) to display dates, numbers and even text in your language!

The only thing left is to actually translate it

That’s where you, the community, will be able to help!

If you’re a native speaker or even fluent in another language than English or French (you’re in luck, I already took care of that one

) and were looking to contribute something other than code to the project, you can now step up and join the crowdin project at:

Help us translate openhab-habpanel and bring it to the world!

Click on your language, and choose which part of the project you’d like to help translate by clicking on one of the 3 files:

It’s not mandatory to have a language completely translated for it to be included, main.pot is enough (but the more, the better

). Parts not translated will simply remain in English. All translations can then be upvoted and downvoted by other members and will be eventually approved. Approved translations will then end up in HABPanel.

A few things to keep in mind when translating: 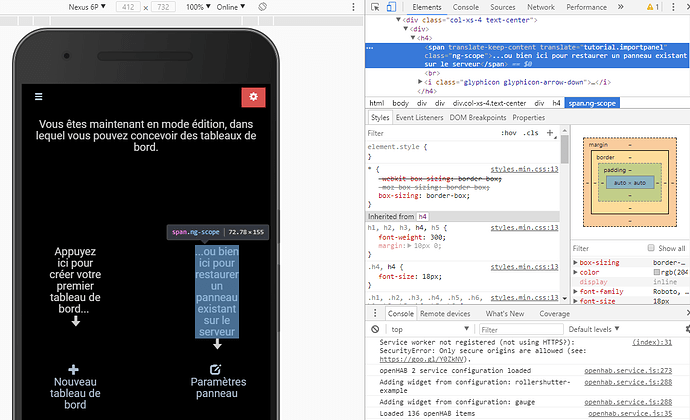 Looking forward to your help!

Also be sure to help translating other openHAB projects on crowdin!

I also want to point out, especially for the most popular languages: if a file is already translated, or even partly “approved” (blue and green bars), this doesn’t mean you can’t participate: you can help a lot too by using the menu on the right to open the file in “voting mode”:

This will open a different interface more focused on voting for or against a translation. Just click on the + or - alongside each one to vote, or edit it directly, and you can discuss on the right too. I’m the only approver now, but I have no clue in most languages in the list, so apart from trusting the first suggestion, I’m hoping to be able to count on confirmation votes too

Regular contributors and voters for a language will also be given proofreading rights, so they will be able to approve translations directly.

Lastly, if you spot an error after something has been approved, even if it’s already in the application, it doesn’t mean it’s too late!

Finnish translation for HABPanel waits for approval and maybe some modifications. Also viewed and translated other projects. Think iOS app is the only one left. (Shouting out to get this done

…And the first language in which HABPanel was completely translated by the community is: Turkish

Kudos to user @harundemirel from Crowdin who translated the whole thing in one sitting, and @hakan for proofreading and the final approval!

had a great start on the first day but stalled for a while, there is still some debate over minor issues but a great coalition was formed and it’s now back to full speed (not even apologizing for this questionable joke :)), closing in at 98%

There have been a few useful votes too, so proofreading should be straightforward. Expect it to be merged in no time!

(80%), led by @kubawolanin and @gitMiguel respectively, are battling for third place

Since I have absolutely no knowledge of either language, I’ll give proofreading rights to you and the other translators so you can validate your (or better, other’s) work!

(67%) with an out-of-the-blue contribution from user @rizkythamrin at Crowdin.

are at 15% each, the former two having main.pot translated and awaiting votes and approval.

are now in the race with 38 and 25 words translated, respectively.

Huge thanks to all for your time, there was amazing progress in only 48 hours! Looking forward to the next days! (I have updated the picture in the first post with the current status).

(80%), led by @kubawolanin and @gitMiguel respectively, are battling for third place

Looks like Poland surpassed Germany and Finland this time

HABPanel is now available in 6 languages (including English) with 3 new ones merged just now: 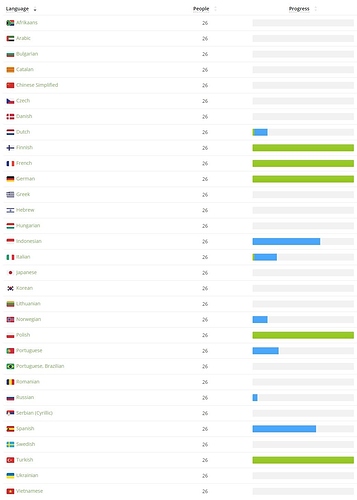 Looking at the activity of the last day, Spanish

on the way as well

The new languages will be available in the next snapshot build, or you can clone the Git repository (or download a ZIP and extract) into your conf/html folder and use http://openhab:8080/static/org.openhab.ui.habpanel/web/ to check it out now.
Set your language in Paper UI.

If you encounter a translation that needs to be improved while using HABPanel, you can always suggest a new one at Crowdin - even over a already validated one. If it’s approved it will replace the existing translation on the next merge.

I cloned the repo to test Finnish translation and noticed that there are parts that are not translated. Can’t remember any similar words while translating. These are in advanced settings tab under dashboard configuration. 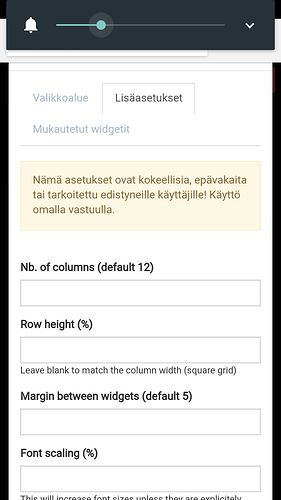 Right, I didn’t do this part, the reason being that these options are supposed to be experimental and likely to change (they really aren’t…) and I was lazy (I really was)

I added something in French along the lines of “These options are deliberately not translated” in the warning text above.

When some other new strings to translate are added I’ll include those as well.

I have completed a preliminary swedish translation, but would be glad if other swedes in the community could double-check it!

I have completed a preliminary swedish translation, but would be glad if other swedes in the community could double-check it!

Looks like you will have to validate your own work @pacive

(others can still vote)

Update after a little more than one week

Proofreaders are still needed for:

If you’re willing to join the effort, just tell me and I’ll give you proofreading rights.

These languages are in very good shape already but need at least main.pot and admin.pot completely translated before the proofreading phase can begin: 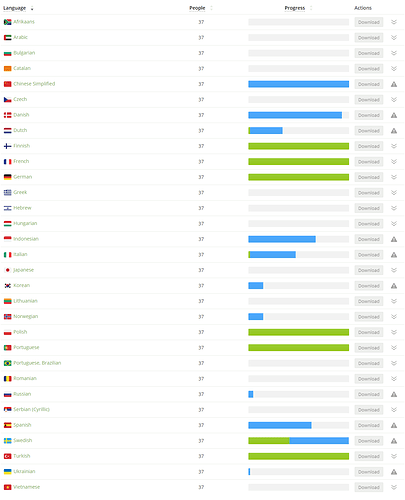 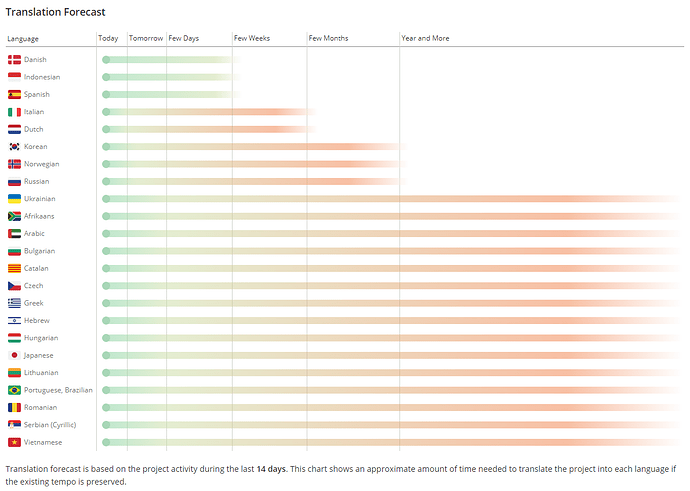 Huge thanks to all!

Someone for Romanian? to validate and suggestions

Time for the weekly update

has been merged! Thanks and congratulations!

Proofreaders are still needed for:

has begun but still in need of translators

After only 2 weeks, 44 users have made contributions in 19 languages, and HABPanel is already completely translated in 11 languages (including English and languages not completely validated). Awesome! 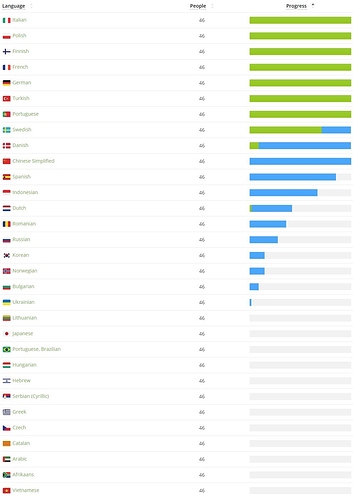 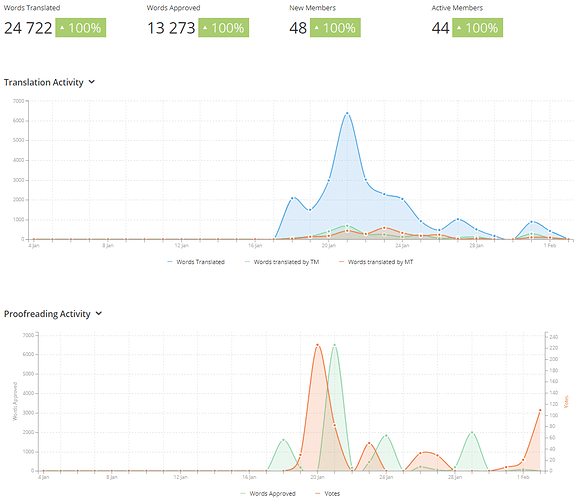 Feel free to ask should you require anything: proofreading rights, new language not in the list… Looking forward to next week

Dear,
i finished spanish translator, some can validate it?.

OK, Czech translation is finished, anybody for check&approval?

It’s been 1 month since the initial announcement, so time for an update!

HABPanel is available in 8 languages including English, but there could be 5 more:

and don’t have proofreading rights please chime in! It’s a shame the translation work is finished for these and they aren’t merged yet. (@FrankCZ and @DarioBonello feel free to proofread your own work ;))

There has been significant progress in Dutch

which are well on their way to completion, between 65% and 80% is already translated: 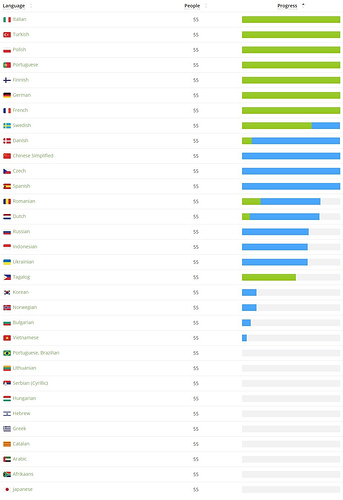 Notable as well is the addition of Tagalog

following a request of a contributor.

As always all contributions in any language are welcome and appreciated, and feel free to ask if there’s anything we can make easier.
Thank you very much! 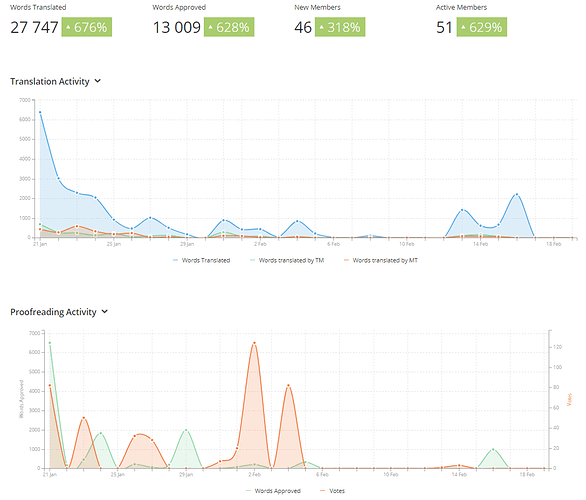 @ysc Ok, can you give me proofreading rights? Thanks! And I saw many more parts of OPENHAB project (Android / IOS mobile app etc.) available for translation… shall / may be these translated too? I think it is good idea to do them all together due to consistency…

I jumped on to this, finished greek translations.

@FrankCZ and @ngalfas, you’re now proofreaders for Czech and Greek respectively - a big thank you in advance

And I saw many more parts of OPENHAB project (Android / IOS mobile app etc.) available for translation…shall / may be these translated too? I think it is good idea to do them all together due to consistency…

Yes, you’re welcome to join the effort for all openHAB apps, each has its own workflow and frequency for integrating the translations into the software, it depends on what the app’s maintainer has decided. I’m not myself a manager of these other Crowdin projects though, @ThomDietrich is.