I just buy a Heltun Thermostat HE-TH01. (If i well understand, it succeed HE-ZW-THERM-FL2).
When I include it, it is recognize as HE-ZW-THERM-FL2, but parameters are different and I can’t configure it properly.

Is it possible to add HE-TH01 in the database ?

Documentation can be found here : https://drive.google.com/file/d/1CgqG39zl5MqTNhfqUAX1d5RbUB95EgPC/view

Thank you by advance

Is it possible to add HE-TH01 in the database ?

Sure, It is a community maintained database. Here is the guide.

Thank you for the answer,
I will create the device (when i will have the Create button :-))

I will give feedback here when it will be done.

Be sure to open a ticket there requesting database access.

When I include it, it is recognize as HE-ZW-THERM-FL2, but parameters are different and I can’t configure it properly.

I’m not sure if we really need a new device entry for that.

I also have five of this Thermostats running. And I also have some params which I could not set yet.

@Dibbler42 Hmm this reminds me of something. I Have five ZWave Heltun thermostats running some of them showing the following. [Heltun_settings] The values are wrong but I cannot change them. Default for this values should be 30. According manual and I didn’t physically (on device) changed them. To what they currently show.

Thanks for answer. By reading both documentation, it seems there is no doubt that we have 2 differents parameters sets for two differents (version of) device

doc of HE-ZW-THERM-FL2 (the one in Database) zwave 500 series (the old one) :
https://drive.google.com/file/d/1CgqG39zl5MqTNhfqUAX1d5RbUB95EgPC/view

Hetltun support website where you will found both device :

Any questions related to z-wave products? Contact our support team and get the answer in 24 hours

In documents, you will notice that parameters lists is different: 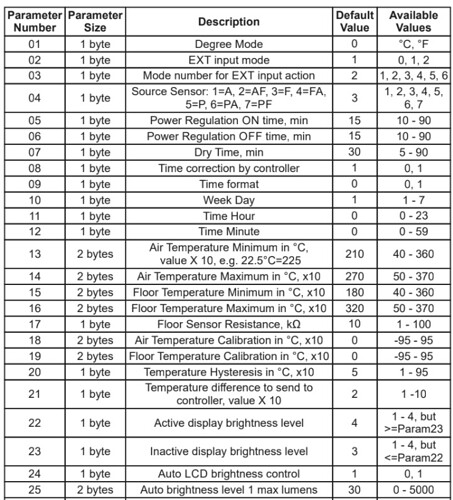 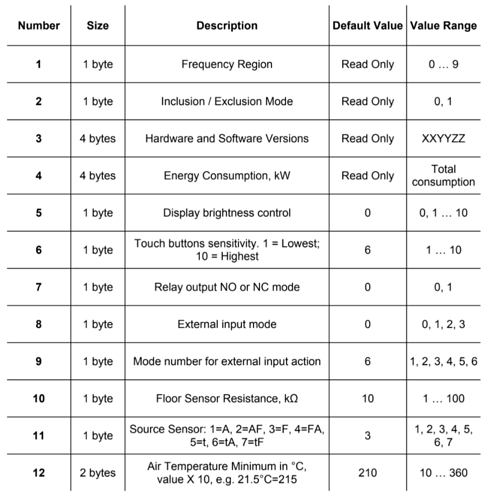 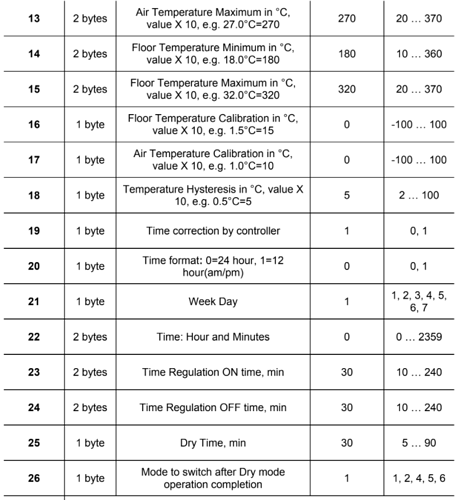 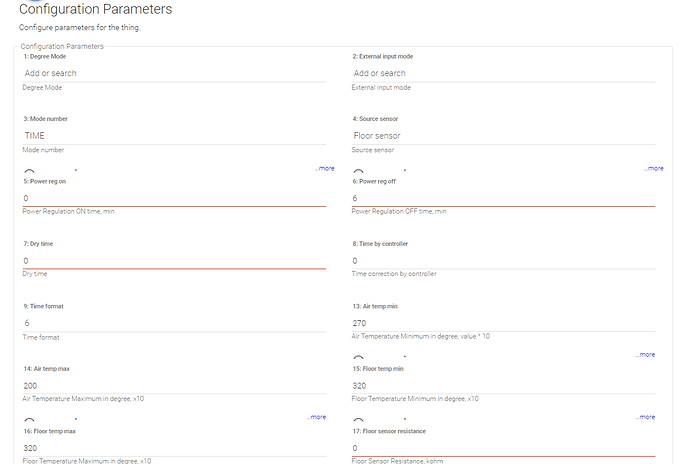 So we can reconize value of a HE-TH01 parameters in the skin of HE-ZW-THERM-FL2.
For exemple parameter 15 is Floor temp Max (32°C) and not Floor temp Min as written in openhab.

Does it answer to your doubts ?

The First device of Heltun was added by me. It was based on lended one from my distributer.

So let’s go on and add a second one. I will create a request against the database.
@chris Do I firstly need to adjust the device type as done earlier. Or can this be done after it?

Adding a new version of an existing device
If you have a different version of a device in the database, before adding another entry to the database, check that the association group configuration, parameters, and channels are the same. If they are, then it is only needed to update the device IDs of the existing device. If there is a new version required because the above data has changed, then first edit the exiting devices versions so that it does not conflict with the new device, then you can add the new device.
Before adding the new version (ie uploading the XML), change the type/id to a random number. This avoids any consistency issues when importing into the database. After the file is imported, change the type/id back, and set the firmware versions appropriately.

I have already try to create a new device in DB using the xml file, but it failed because of the already existing device (thanks @chris). If I well understand, we have to update the existing device so that it won’t conflict with the new one… but what we have to change ?

Also, we need to update the old entry to fix the version numbers -:

I’d also prefer that if these two things are just different versions of the same device, that they had the same name and thing uid. Or has the manufacturer changed the name of the devices?

These two devices have the same function (Heating Thermostat), but use two different hardware and indeed, manufacturer has give two different references and identified them as different “model” :

We are in the same case as Fibaro and FGS-222/FGS-223 where two device has been created in DB.

I have made the change to the older model and removed the device type which is used with the newer model.

and removed the device type

We shouldn’t do that unless you are really sure it is not also used with the old version? If not, we have now made a hole where some devices will no longer be detected. If you’re sure these IDs are not used on the older device, then not problem.

I’m pretty sure on it. But can further clarify with Heltun.

I actually have ordered the older Model and received the newer ones this year after waiting for about 1.5 years.
Maybe you can keep the change request open. Till I know it finally.

Maybe you can keep the change request open.

I guess we can leave it open until the new device is ready, which probably will only be a few days. Then we need to decide as we will either need to adjust version numbers, or manufacturer IDs, or both…

If you think it’s likely that the information was set incorrectly, then I’m happy to remove it, and leave the version range maxed out on both. I do agree that this seems most likely given the information from @dirandad that the hardware is also quite different…

@chris, @dirandad
Question submitted to Heltun support. Expecting answer in the next days.

Well, I have updated the device on the DB. It is still in modify state.
I have :

@chris
It appears 2 different user are working on this. We need to be careful here.

It appears 2 different user are working on this

I haven’t made any change to the old device, only on the new one. And I haven’t notice any suspect change in this device.
@chris, how can we confirm endpoints list of the new device ? Is there a compare tool to see if the xml file match the DB ?

And another question, is possible to test the device declared on the DB that is still in modify status in my openhab installation where I can made test with the real device ?

is possible to test the device declared on the DB that is still in modify status in my openhab installation where I can made test with the real device ?

Not supported, but in the past, some have tried this with OH2.

**PLEASE don’t use this without also updating the device database! As a community, we make the most progress when everyone contributes!** I’ve seen several posts where people have made changes to the device database and they were eager to try out their new shiny gizmo, or wanted to test a change/fix an issue, before it was included in a build. Here is a method to update the zwave jar with a modified device Thing definition, without having to use an IDE to modify and compile the jar. This method…