Hi folks,
as there is scattered topics across OH quite a lot, can we summarize what’s what in 2022 with OH3.3 in terms of Home(kit) ?

It’s been while back in OH2 where I experimented with Homekit and homebridge, but it was very unstable, everyother time unreachable and overal terrible to use. So I’m happy with sitemap/app.
Time flies and I’ve gave it a shot again with OH3.3 recently.

1. HomeKit integration Binding
Way better than it was, but still just like 90% of the time it’s working and 10% “unreachable”
Quite a lot of annoyance with “no remote access” while I’m not willing to use AppleTV as a bridge - I do have own VPN so I’m really not going to “allow remote” from apple directly.
As well a lot of issues in the logfile, just while iddling basically every 10mins 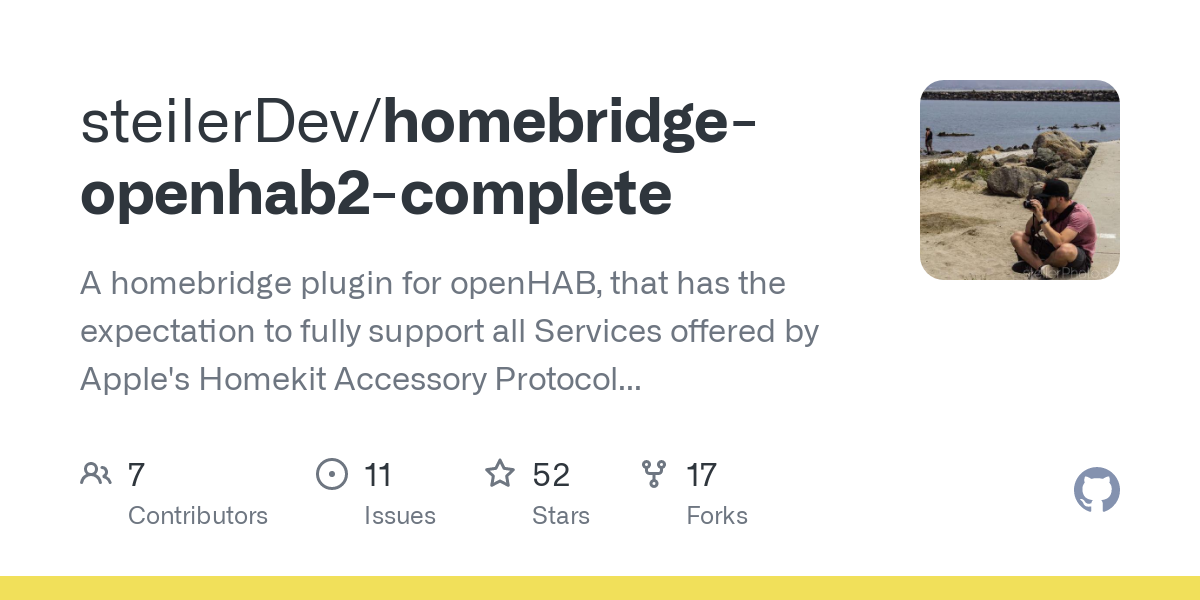 GitHub - steilerDev/homebridge-openhab2-complete: A homebridge plugin for...

A homebridge plugin for openHAB, that has the expectation to fully support all Services offered by Apple's Homekit Accessory Protocol (HAP) - GitHub - steilerDev/homebridge-openhab2-complete: A...

Been using this in OH2, as it seems it’s adapted to OH3, but did not yet investigated it freshly
Anyone using it with OH3? 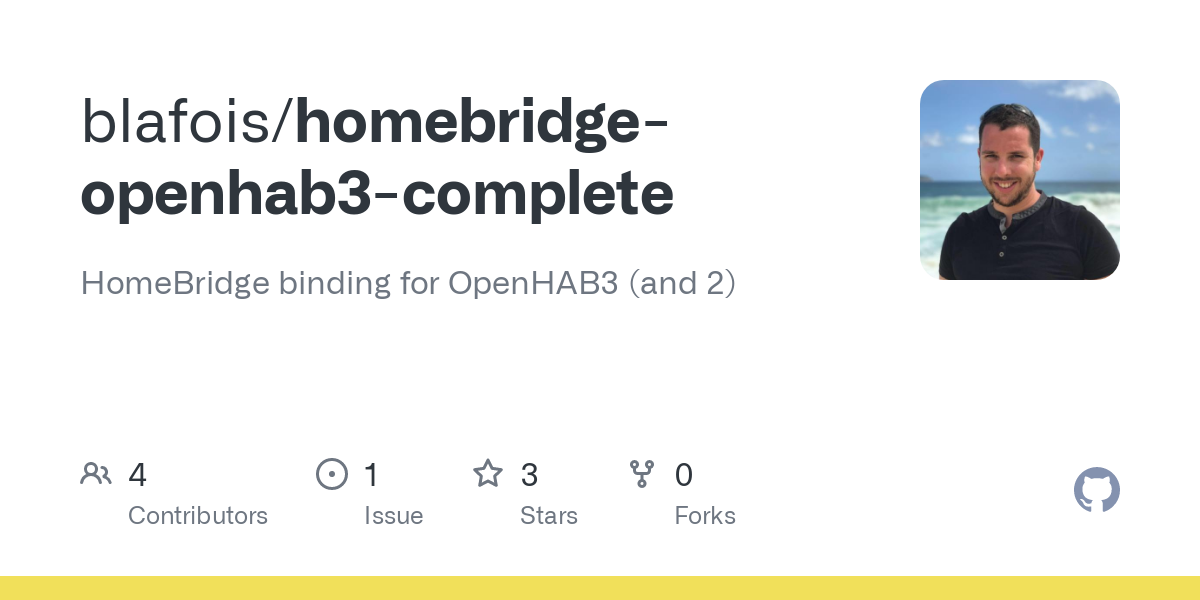 HomeBridge binding for OpenHAB3 (and 2). Contribute to blafois/homebridge-openhab3-complete development by creating an account on GitHub.

Downsite of these as I recon was unstability and unreachable items quite often. As well as need of separated json with Things, which is pretty annoying to maintain in logrun and in the very beginning of setting everything.

Would like to have some insigts if anybody is using it reliable and what’s configs you have to make them reliable. It’s quite heavy topic, yet not sure if worth the time spend on it

edit:
as for now, HomeKit binding included in OH3 is the best way how to make it work reliably. Despite some inssues with inviting users (investigating) everything works flawlessly

but i can tell the number of homekit bugs reports here has significantly reduced in the last 5-6 months.
unclear, due less bugs or less people using the binding

personally i use of course the homekit binding, with over 120 devices, all different types. stable since 2 years, all time responsive, it just runs.

btw, the bug you mentioned “Unknown user” was actually fixed with 3.3 or so. the issues reported nowadays are mainly related to docker deployments.

I tend to use build in stuff not 3rd party as well and pointed out that’s binding is way more better than it was.
Would be great somehow resolve no remote access bullshit from apple

btw, the bug you mentioned “Unknown user” was actually fixed with 3.3 or so. the issues reported nowadays are mainly related to docker deployments.

actually, im thankful for this kind of topics. it gives a feedback and shows the areas of improvements.

on remote access: im afraid, it is part of the apple design. Homekit protocol uses multicast (mDNS) to find homekit accessories (including openHAB). VPN usually does not support routing for multicast. even if you enable multicast routing on your side, it looks like iOS will still not use VPN for mDNS.
https://developer.apple.com/forums/thread/695401

without multicast you will see “no response” in home app. this issue you will have with all 3 options for OH-homekit integration.

the only solution, i could think of, would be a custom home (homekit) app… but then you can use OH app.

on your error:
, in the older version, homekit binding was loosing pairing information randomly which led to this message. that issue is fixed. but you can still get this message for wrongly paired device. the message says - binding got homekit request from unknown device (user=device) that is not paired correctly. do you have any ios device with non-working homekit home? maybe you have multiple homes in home app? you need to delete that home and the message will disappear.

do you have any ios device with non-working homekit home? maybe you have multiple homes in home app?

will tripple check this, thank you.
But I’m not aware - as well this is new HomeKit binding install so I guess it would have different QR than like 2yrs ago had.

pff, thanks for link. Hole into the local network, no way…
and it’s not even possible to hide that stupid warning which takes 1/3 of the display

on your error:
, in the older version, homekit binding was loosing pairing information randomly which led to this message. that issue is fixed.

so I’ve checked it everywhere and all “homes” are this new recent as they are synced by iCloud (even remote access is allowed from tablet)
Only thing I can think of, it’s caused by user I’ve invited to home who is part of the family iCloud.
Other than that, there is no old configuration anywhere.

it must be device that is currently in your network. it sends regularly request to openHAB and asks for accessories. but openHAB does not recognize this device anymore. if you have table as bridge for remote access, disable bridge for some time to check - maybe bridge has some old home that is not visible anymore.

if you have table as bridge for remote access

I don’t
this OH3 instance is even completely new from old OH2 on new hardware and new linux… so unlikely is somewhere something cached.
Is there a way to flush everything from the binding?

is there a way how to decode user asking for access and/or device identifier somehow?

anyway, none of my devices here have any configuration pointing to this OH instance

since I removed this invited user, it looks like error is not appearing. So it must be related.

Oh, nice to read from one of the binding maintainers - I have to confess that I switched multiple years ago to Homebridge + Plugin because I had too much trouble with the binding

If you say that the binding got (finally?) more reliable than I might have to give it a spin again

I use this binding since 2 years. With OH2.x it was far from perfect. A lot of “not reachable”, “not resonding” etc.
But since OH3 it works perfectly for me. There wasn’t any issue since I updated to OH3.x.
I can’t see or feel any difference compared to a “native” Apple bridge or device. There is now in iOS16 no delay at all. When I open the Home app every device status is already updated and response to an interaction.
So I would give the Homekit Binding 5/5 stars

+1 for what @dirkdirk said, using it with HomePod Mini as bridge without any problems.

@dirkdirk @crnjan wow, 5 stars. thank you! you know how to motivate contributors

i will immediately implement something

since I removed this invited user, it looks like error is not appearing. So it must be related.

I have some difficulties to configure HeaterCooler a bit, sometimes it shows as temperature only, sometimes like bigger tile - so investigating it a bit.

Othere than that it works really well and definitely no unreachable items as with OH2x!

@yfre shall I create issue in git about invited user or you think this was really solved and it’s my local issue?

@kriznik thank for 4.5 despite of the issue.

we should try to reproduce this issue. please try on your side to invite that user again and check logs. i will do it here in my setup. if we can reproduce then lets create git issue for it.

In the past I also had the issue with homekit occasionally forgetting my items through the homekit binding and having to re-add them to my homekit rooms. But I haven’t had that issue for some time and otherwise it has been spot on including with the recent ios/homekit app updates. I only use the homekit gui occasionally but I do rely on it for presence detection (we’re an ios household for phones) and showing messages on carplay as in when the garage opens and closes.

I wonder if some of the op’s issues are relate to not having a homekit hub/ipad in use?

I am using openHAB for more than 2 years now and recently (~3 months ago) I switched from the Alexa ecosystem to Homekit. I use Apple devices (Smartphone, Watch) since years and therefore, it seemed logical to me to have a native integration into my daily work devices. And I have to admit: it was a good decision.

The Homekit integration in openHAB works great. I haven’t experienced any outage or items, which are “not reachable”. The only problem I had once was reconfiguring all devices to their rooms, because they have lost the room association. But I think this was due to a configuration error on my side. Otherwise, to control my smarthome from my Apple Watch or iPhone is a great opportunity and I am very thankful to use this binding. The only downside is to miss some accessory types (like vacuum cleaner), but this is up to Apple.

Just for clarification: I use Homekit as a frontend on my Apple devices and to interact with Siri. The complete logical part (e.g., automations, rules, scenes) is still based in openHAB. Because I am that satisfied with this binding I switched entirely from Alexa Echos to Apple Homepods.

@yfre great work and thank you for maintaining this binding!

note: home is not having appletv/homepod in the setup

regarding issue with re-adding accessories to a room - @ccutrer has submitted an enhancement to fix this issue. accessories will stay in the correct rooms even if openhab item config is broken. enhancement is still in the review, i hope it will made into the 3.4. release.

Regarding the issue of items becoming unresponsive in a docker Szenario: I fixed it with avahi daemon on the host machine.

When the setup was done I copied the whole hap tcp announcement by OH and added it to avahi daemon on the host machine. So usually openhabs hap announcement is there twice, but when OH3 stops it’s hap announcement (which is the reason for items becoming unresponsive) there is at least the avahi one pointing to the same machine.

This works now for months instead of days or hours.