How do you keep everything tidy?

I’m interested in where you keep all your kit and how you keep it tidy.

At the moment, my router, bananapi (running OpenHAB), Pi2 B+ (struggling to run Plex) and all the cables required to connect my Freesat box, DVD player, LightwaveRF WiFi Link and nowTV box are all just squished behind my TV.

I’ve got to a point where this needs to change, however, I’d be interested to know how other people have solved this issue as so far it’s either a custom rack under the stairs (with minimal ventilation) or a shelf in the hallway and judicious use of wire-cutters to get cables to the right length!

How about a higher WAF hardware for OH2
Where do you put your hardware?
christianjwaite (christianjwaite) April 28, 2016, 4:58pm #2

I had the same problem, solution was to build an UnRaid machine off the Lian Li q25b case, which is now my file server and utalizing dockers is also my EVERYTHING ELSE.

Next up… 2 TVs that are running Android TV and connecting to the server.
No mess bliss

Ideally I’d like to hide the TV away and have it “reveal” when it’s turned on. That way I can have my house void of any electronics, but behind the scene have ALL the electronics

I think this is a VERY open ended question. It depends heavily on your setup.

Pi devices are easy to stick anywhere as they don’t require a whole lot.

I have a small closet with my power box in it. The house had cat 5e wires run to all of the rooms as “phone” lines. I re-punched them down to a small ethernet punch block. There is a piece of plywood covering that wall. I mounted a gigabit switch and a shelf. I put my mini-itx home built server on the shelf. I basically put everything I can in there. There is a large APC UPS I recovered from work that keeps everything running for a couple of hours.

I have several other little items in there mounted to the board such as a router, poe for cameras, modem etc.

I must agree, this question will vary a lot from person to person.

I got my Pi 2 running openHAB hidden in a closet, it was mainly placed there to reach all the z-wave devices best possible for my 1st&2nd floor. Basement have all the gigabit switch, nas (and other server/computer stuff)… All services are backed up by UPS to be shut down safely…

Ideally I will gather all the stuff inside a rack cabinet in the Cellar.

Just to illustrate the variety of setups I’ll post mine.

I have an old laptop with a busted screen that acts as my server sitting on my desk.

I have a bunch of hard drives (NAS) connected to this laptop through a USB hub. I’ve hidden those in magazine boxes so they are not visible and their cables are tidy and out of the way. Eventually I plan on moving much of this from the desk to under the desk. the primary reason I haven’t is about once a quarter I need to physically access the keyboard on the laptop.

The router/gateway is also on this desk.

Everything HA is either wired to a satellite Raspberry Pi or otherwise wireless. The Pis are in the garage and utility closet so making the wires pretty and out of the way is not really needed. They are in cases so they are protected but not much more than that.

I’ll echo what @christianjwaite was saying. And so much depends on your level and needs as well as home structure, etc.

I also run a NAS box in my basement, except only major difference is I run with VMWare Esxi and then have Unraid running as VM within it, along with separate VM’s for Ubuntu running OH1, OH2, and few other VMs. I actually ran power to this part of my basement to purposely get things into a specific corner.

I also did have a PlexServer running as a separate VM at one point, but am really an XMBC/Kodi guy.

It’s more costly upfront in setting up your NAS, etc, but it provides for easier growth and flexibility going forward I think.

I also am running ‘thin clients’ for Kodi at each TV in my home that are Cat5 wired to the Switch in the basement next to the NAS. Currently two of those ‘thin clients’ for XMBC/Kodi are jail broken AppleTV 2 and an Ouya. I really should centralize the XBMC database, but it has not been a high priority.

Fantastic, thanks all, this is exactly what I’m after!

I’m now considering a crate from IKEA mounted in a corner in my hallway with everything either hooked or cable-tied to the frame and the socket replaced with either http://www.powerethernet.com/product/power-ethernet-t1501.html or http://www.powerethernet.com/product/power-ethernet-t1000.html, with a second T1000 behind the TV to plug the DVD player, FreeSat etc. into.

I have everything in the unfinished portion of my basement. I covered a section of the wall in plywood, which allows me to mount things in nearly any location I want. My router (pfsense), patch panel, switch, UPS, and VoIP box sit in a rack. Linux server is mounted vertically (ZFS, a few VMs, etc.) and OpenHAB lives on the Raspberry Pi in the aluminum case to the left of it. This setup is facilitated by having room in my house. In the past I’ve used closets, a laundry room, and even the underside of my entertainment center, using wire ties and peg board.

Is that a landline

Ha ha, yes, I’m so ashamed! At least give me some credit - it’s through a VoIP provider and is useful for getting both kids on the phone with relatives at the same time.

Awesome stuff @j_wittenzellner, thanks for sharing.

I’ve been recovering from minor surgery over the past few days, but I now have a project for the coming weekends…

Well, here’s another idea: I intentionally chose not to bother ‘going tidy’.
I’m following the ‘divide and conquer’ principle: don’t put everything in a central location, but create ‘sites’ of reasonable (handleable) size. Create as many of these as needed and link them using Ethernet (or WiFi if wiring is impossible).

I actually also aimed to reduce the number of subsystems first (each ‘subsystem’ is to bring a HW gateway box such as a hue bridge or MAX! cube) down to the minimum number possible, plus I chose small form factor devices (RPi and 5- or 8-port ‘pocket’ switches), so all of those devices, I can ultimately stuff them into a drawer (or IKEA box, actually

).
It doesn’t really look ‘tidy’ inside but thanks to the limited number of devices, it’s ok. Just label the cables and you’ll find quickly enough what you’re looking for.
That approach also helps minimizing wiring works in your home, and helps solving ‘distribution’ type of problems.
For example, I need my router to be connected to my DSL line and via USB to my printer, so it needs to be located close to where I want the printer to be. Initially, I placed my NAS there. too. But it turned out to be too noisy, so I’ve opened another ‘site’ and banned it to the basement.
At the same time, the Pi running the media server needs to be HDMI-connected to the TV, as do my satellite receiver and AVR. All need to have ethernet, so another site with a 5-port switch for those three.

Done right, distribution can even improve resilience. It also gives you more choices where to place radio transmitters (i.e. closer to receiving devices, at least on the same floor) which I found to be important because many radio based systems don’t support routing at the radio layer.

PS: in my other (professional) life, I’m working as a data centre design engineer. I showed my ‘data centre’ to my boss, but only after he promised he wouldn’t fire me

In my other (professional) life, I’m working as a data centre design engineer. I showed my ‘data centre’ to my boss, but only after he promised he wouldn’t fire me

Lol, I know this feeling well!

I have two primary drivers for tidying up:

Noticed that you got a waterline (or what it’s called) right above all your setup, crossing fingers there wont be any leaks

I’m lucky enough to have power in my garage so all my kit is in there. All out of sight from the wife, although it still needs to be tidy as she uses the garage most days. I also terminate my CAT5/6 structured cables there so have a central point for all things IT.

Noticed that you got a waterline

It’s hard to tell from the picture but it appears to go up and then out the sill maybe?

The rest of the water piping in the house is PVC, so you’re probably right.

As for my main TV, we have it in a cabinet with a lift, so all of the components are hidden inside. I hacked a two-relay USB controller (http://numato.com/2-channel-usb-powered-relay-module/) to the lift controller (it had a wired controller and a crappy RF controller) and use the state of my Harmony Hub remote to control it. Basically, when the state changes from “PowerOff,” openHAB pulses the relay for the “up button” a few times and pulses the relay for the “down button” a few times when the state change to “PowerOff.” I can post pictures if anyone is interested.

First and second pictures are the TV in the down and up positions, respectively. 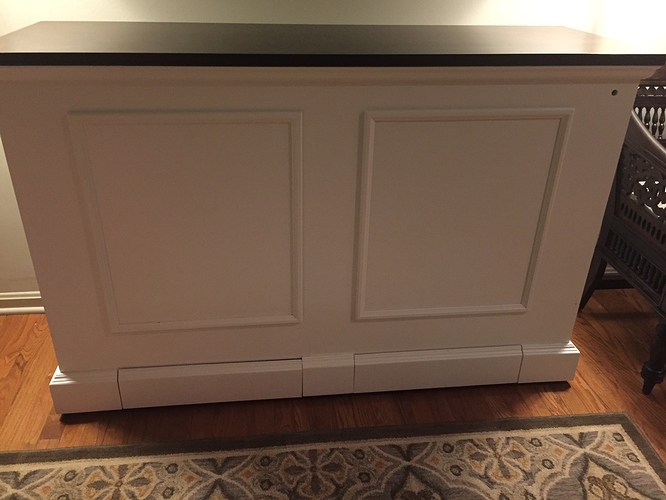 The little hole on the upper right-hand side of the stand is for an IR repeater. I don’t use the IR repeater that came with the TV stand because I have a Harmony Hub mounted inside the TV stand. The company provided me with a painted plug, but my 18-month old son likes to yank it out of the hole and put it in his mouth! At some point I need to sand the plug down to a better fit and use some strong glue.

This last picture is the inside of the TV stand.

The Harmony Hub is mounted on the outer-facing wall, pointed down at all of my other electronics. Set top box is on the left, Blu-Ray player is on the right. The power strip in the center powers everything. The white project box mounted to the rear-facing wall contains the Numato relay, which I cut into the remote-control wire of the lift controller. That is connected to a Monoprice USB-to-Cat5 converter, which goes back to my openHAB box. Also against the rear-facing wall is an Intel NUC that runs openelec. It’s not the neatest, but the wires all lay flat so that they do not interfere with any of the moving parts.