I have added a hue bridge to my openhab2 setup.

I have got one Philips Hue Color Ambience bulb and one IKEA Tradfri Color Changing bulb.
Both do function as expected in hue app. (Changing Colors, Brightness, etc.)

However, when adding the color channel of both bulbs as an item in openhab2 and trying to manipulate the color settings via “control” tab in paperui, only the Philips bulb is reacting to changes on the color, the Tradfri bulb is only reacting to brightness changes but doesn’t change the color.

Are Tradfri Color bulbs not supported via hue binding?

Additiontally:
The Ikea bulb is recongnized as 0200 (ColorLight)
The Philips bulb ist recognized as 0210 (Extended ColorLight)

i think it depends at least on the tradfri binding version.
the color channel of our ikea color bulb was recognized automatically after an upgrade from oh 2.1.0 stable to 2.2.0 snapshot: 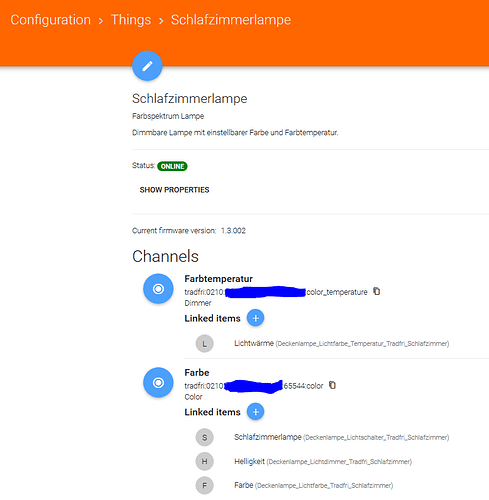 Older versions (and that may mean not very old!) use a different set of commands than the Hue bulbs so they arent compatible. Newer firmware seems to fix this.

and i think the update to the newer firmwareversion is only possible using the tradfri hub.
nevertheless our bulbs color channel was automatically detected after an upgrade to the new version.
from karaf:
0.9.0.201710180819 │ TRÅDFRI Binding

My Ikea bulbs have got version number 1.3.002
Since I have got no gateway I can not just upgrade and test.

Can you or anybody else confirm that it’s my old Firmware thats causing this behaviour?
I was hoping not to need to buy a tradfri gateway.

as you can hopefully see in the screenshot above our bulb is on the same firmware level.
what version is the tradfri binding youre using?

It should be possible with other ZigBee OTA servers. I’m not sure if Hue hub supports this though.

I’m not familiar with the firmware versions but for sure the older devices use the CIE commands and Hue doesn’t support this. We had a similar issue with the ZigBee binding recently. @shorty707 may be able to comment on versions as his bulb uses the old commands.

Thanks but as I mentioned, I have no tradfri gateway but only a hue gateway. The tradfri bulb is connected to my hue bridge.

Because of this I am not using tradfri binding. I am using the hue binding. My Color changing bulb is the tradfri e27 that came with the remote in a bundle.
Mine is recognized as 0200 not 0210. What’s your bulb?
In fact I do see the Color channel and can link it to an item, but when I move the slider for the color it has no effect.

Could it be possible to manually manipulate the device type to make it appear as 0210 not 0200? That could maybe help.

Cause as long as rikky and me have the same firmware and he can control the color it could be something else, maybe.

i beg your pardon, i have failed to spot youre not using an tradfri gateway when reading your initial post.

you are right: if i connect the ikea bulb to the hue gateway, openhab2 hue binding will just recognize the color channel as 200 and there is no effect changing the color in paper ui control.

im only able to chage the colors using the tradfri gateway & binding, which recognize the bulbs 210 channel.
sorry for the confusion.

As you’re having the gateway, could you try updating the firmware and report if it works? Even though I doubt it will because I think this is the most up to date firmware version.

Would be really kind if you could try. Maybe there’s a chance I don’t have to spend extra 30€

just tried to update the color bulb using the android app with no success, so i guess 1.3.002 is the newest version.

@chris according to what @letitbe said we have the most up to date formware. So is there a chance this could be fixed?

we have the most up to date formware.

Yes - it looks like it. At least the version looks newer than when the Hue fix was made in August although I’ve not managed to find a good repository with a change log.

So is there a chance this could be fixed?

I would say probably yes, but I have no real knowledge of the Hue binding so I can’t really say this for sure (sorry).

Where can I get support for the hue binding? Could or should this thread be moved to another section may be?
Who could say something about the hue binding and the tradfri support?

Thank you all for your answers so far.

Sorry - I’m not sure who is best to comment on the Hue support as I don’t really follow this. If you don’t get anywhere in a day or so, you could try raising an issue on the ESH issue list. I would wait a while and see if someone helps here first…

It seems like theres actually no one that could comment on this.
It’s strange that no one has got problems with using IKEA Tradfri Color bulbs on hue bridge with openhab2.

So I guess ill raise an issue on github.

Thanks for your help anyways.

I bought the same bulb and I have the same issue. I do have a ikea gateway but would like to control all lamps through the Hue gateway as backup. I can confirm that the lamp is recognised as a type 200 although it works perfectly using the Hue app. Would welcome a solution

I have the same problem. I use the Tradfri GU10 Lights with the hue bridge. With the hue App everything works fine. The lights show up in openhab as well. But I cannot control these lights with my sitemap or with home kit. Same issue with osram lightify garden lights by the way …

Is there any solution?

Same experience here. Bulb is recognized as type 200 lamp and therefore openhab cannot use the color channel correctly. It is only usable as kind of color temperature channel.
Does someone know how we can give appropriate input for the hue binding developer?