Since today I face a lot of issues with my KNX connection. I haven’t changed anything on the KNX configuration or on the device setup, so I really don’t know what may have caused this. Hope someone can help as other threads here point to the same/similar issue but the provided solutions didn’t help.

Error from log file
there have been multiple but I just have this last one as the log got lost after some restarts :-/

What I tried so far

Is it possible that openHAB “saves” the tunneled connections? There is a limit of 5 on the device but atm I only run openHAB and nothing more. Connection from the ETS works without any issues, but to be sure I closed the connection again of course.

Could it be a network issue as I’m facing some connection issues with a Fronius bridge as well (only a few ms)? As for the Fronius bridge it may be a bad WiFi connection or an issue with the Inverter itself - wanted to take a look in the next few weeks.

There has also been some power fluctuations (just a few ms) yesterday/today in my area. But actually the interface and NAS are behind a USP - so those should not have been effected.

As you can see, I’m running out of ideas. And I did not had this issues back when I’ve used openHAB 2.4 a few weeks ago.

Hope someone has a glue/idea and can help.

I just setup a new docker container and created a new KNX bridge, device + channel.
The bridge is configured in the same way as in the other container.
At least for the moment I don’t have any connection issue in the log.
I can turn on/off the only item (light) I configured.

What I don’t have here are multiple KNX devices configured.
Is there maybe an issue with this Fetch option for KNX devices? I have this enabled for all of them (> 15).

Ok, I set the Fetch option to false for all KNX devices, but that didn’t help.

Next try is to remove the cache + tmp folder and restart the container again.

It seems removing the cache + tmp folder did the trick (where I assume the tmp is not important here).
After restarting the container the bindings got reinstalled automatically and at least for now the connection to the KNX interface is stable.
Hope it stays this way

Bad news, an hour after I posted this and went to bed the same issues appeared again

the error is repeated every 1-2 hours in the log file.

And there is a new one in the log:

have the same issue !

Just lately or are there older ones as well in your log?
I tried yesterday evening and night again to get it running.

I ordered now another KNX IP interface to check if the hardware is the issue, so will see.

Just half an hour ago I changed the setting of the bridge now from TUNNEL to ROUTER. At least it connects and I have no error messages so far. Let’s see in a few hours.
Issues now are that the bridge is shown as ONLINE but all KNX devices are shown as OFFLINE but they are actually working.

Is it possible that the binding has some new bugs? but I assume it won’t get updated automatically or?

having similar issue, openhab seems to take all the tunnel connections available on MDT KNX router, I have no idea why it takes more then one tunnel 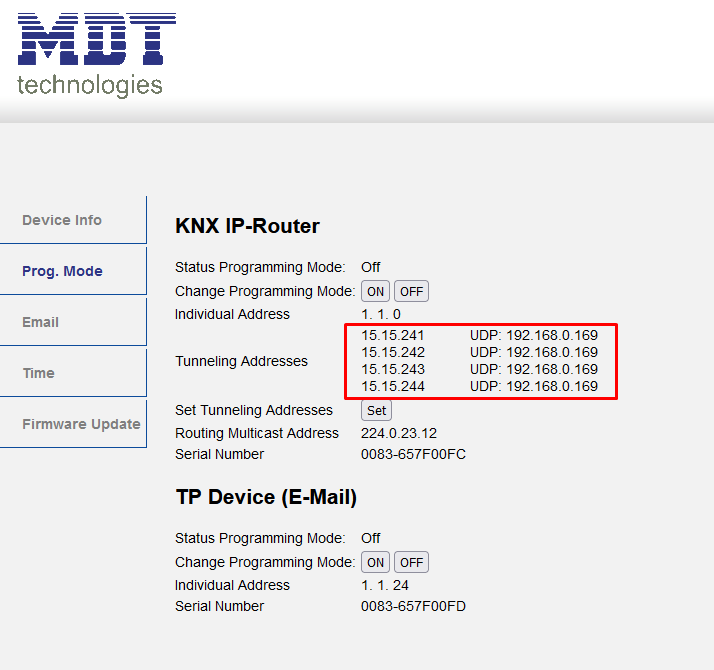 these are my settings used:

I have the same issue on a Weinzierl tunnel configured interface. Openhab 3.x o the KNX Binding saturates all connections to the device and I can’t use other things like ETS to configure the bus unless I temporarily quit openhab.

Is there any new solution found?

Since the last openhab update or since adding 3 new actors I have the same issue (again).

New is the following in log - or maybe I did not see it yet:

Unfortunately not from my side - I changed the Mode from TUNNEL to ROUTER and it is at least working for now (most of the time - it seems some commands are lost from time to time though) :-/

I have been having the same problem since August 2022. “Close connection - maximum send attempts”. Approximatly once every week. Sometimes it could be a few weeks or a few days.
I using Raspbian on Pi4 with 8GB RAM and have been updating to each Milestone of 3.4.
I have approximatly 55 KNX devices (things).
I am using an MDT IP Router (tunneling mode) which is updated to the last firmware available from MDT and noticed that most of the people complaining about this issue are using the same MDT router.
The last time this happened I checked the webserver of the IP Router and there were no tunneling connections active. The KNX IP Router thing stays online/green in Openhab.
Could it be a compatibility issue of this router?

I have an Enertex KNXnet/IP Router with PoE - so I do not think it is specifically the MDT router.

keep in mind the traffic it has to handle is small this comes from a allinbox device sold by zennio.
Now most of these IP stuff runs embedded chips that don’t have leave to much space for buffering or error correction.
So long story short 50 telegrams per second per interface make sure also that tunnel number is not taken by something else and stable network path from openhab to it.
oh and make sure the localsourceadress is the address of the tunnel you want to use