The channel should be available in the latest snapshot version. Maybe you want to upgrade your new test environment and use the binding version delivered with it?

I will try and let you know where can i get the snapshot version github ?

I am now running openhab v2.3 stable and am still not seeing an inputaction channel or a progress bar channel

Are you sure you don’t have an older manually installed binding file in your addons/ folder? The inputaction channel should be available in the latest stable.

We never planned to introduce such a channel. I introduced new channels duration, currenttime and currenttimepercentage. Those can be used to implement a progress bar widget for HABPanel. But be aware that this feature has been merged after the latest release. Meaning those three are only available in the 2.4 snapshot version.

Searching for kodi in the main root folder of OH only returns binding v2.3.0

This folder is empty apart from the readme file 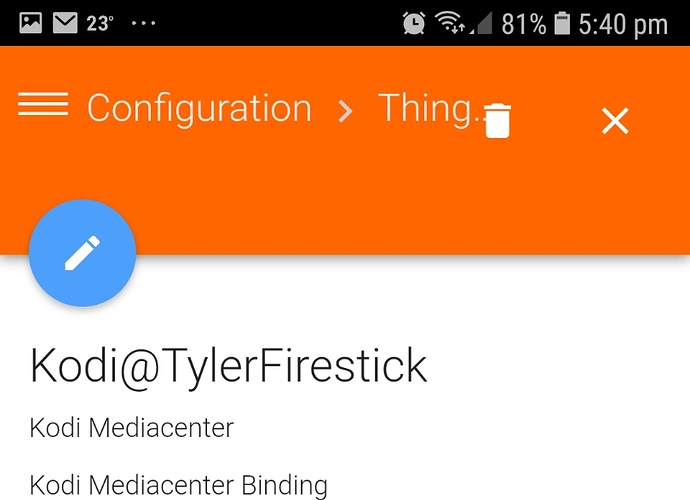 Sorry if this is the wrong thread but it seemed relevant.

I was happily running the Kodi binding for some time, and I’m in the process of making a Kodi remote, for which I’d very much like to add the percentage progress bar from snapshot 2.4.0, and inputaction from 2.3.0

I’m still tweaking at the moment, I want it to be a fully featured Kodi remote. Then if there’s interest, the plan is to release it as a stand alone widget. [media_v2b] 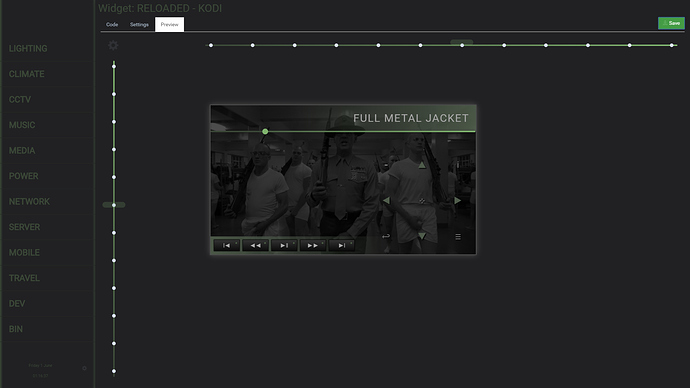 I deleted the old Kodi thing from the previous binding, and this is where I’m stuck, unable to add it again.

To make things worse, when trying to add the Kodi binding, it uninstalled every other binding at the same time.

I just need to get the latest snapshot running so I can add these features to my remote.

That would be nice

For now I had to reinstall the old Kodi binding, which means none of the extra remote control functions work apart from the basic playback stuff, so I can’t finish the widget until I can work out how to successfully update from 2.2.0 to 2.4.0.

@Sharpy Did you manage to update the Kodi binding? Still no luck this end.

my problem is slightly different from your i have got OH V2.3 running Kodi Binding V2.3 its working fine but there is no option too select the Inputaction channel and as cweitkamp said further up in the post the inputaction channel should definitely be available in v2.3

Do you read the section in the docs for upgrading your system? E.g. on Linux you can change the version in your apt configuration. The latest binding version won’t work with older releases than 2.3 because it depends on new features introduced lately. For your purpose I suggest to use the 2.4 snapshot.

@Sharpy To be honest, I don’t have any new ideas on your situation. One thing I didn’t ask you after you had been upgrading your environment to OH 2.3 is if you tried to recreate one of your Kodi things afterwards?

Do you read the section in the docs for upgrading your system? E.g. on Linux you can change the version in your apt configuration. The latest binding version won’t work with older releases than 2.3 because it depends on new features introduced lately. For your purpose I suggest to use the 2.4 snapshot.

Updated and working now, thanks.

The only issue now is fanart and cover images are showing as UNDEF when they were working in the old 2.2.0 setup. I haven’t changed anything else, just updated.

@Sharpy To be honest, I don’t have any new ideas on your situation. One thing I didn’t ask you after you had been upgrading your environment to OH 2.3 is if you tried to recreate one of your Kodi things afterwards?

Nice. I am glad you got it working.

Hi again Gman do you have an update on your kodi version remote ?

is there a volume controll in your new version looks like im using a old version with only fanart play pause ect no interface controll ?

Hi Aaron, you’re probably using the generic media control widget, which doesn’t have the extra Kodi buttons. I was making two versions as people were asking for a non Kodi one for any media player, and a the full fat one for Kodi with all the extra buttons.

I was hoping for some feedback on my generic one first, to make sure it was working the same for other people as it was for me.

I think there a few ways you could modify the code for two instance with a switch.
I hadn’t given that any thought before now, because personally I’ll have separate panels in those rooms with Kodi, so I’ll just link the panel to the instance in the same room.

Here is the current Kodi version, all buttons work on the right and bottom left, as does the duration bar, but not the shortcuts in the top left, I think they will become possible in a future version of the binding, so I’m going to remove them for now. I’m wanting to add duration and elapsed time too, but the binding only shows this as total seconds currently.

I just need to test it out on music, so far I’ve only tested it on movies and TV shows. It shows the extra text with TV shows for the episode name: 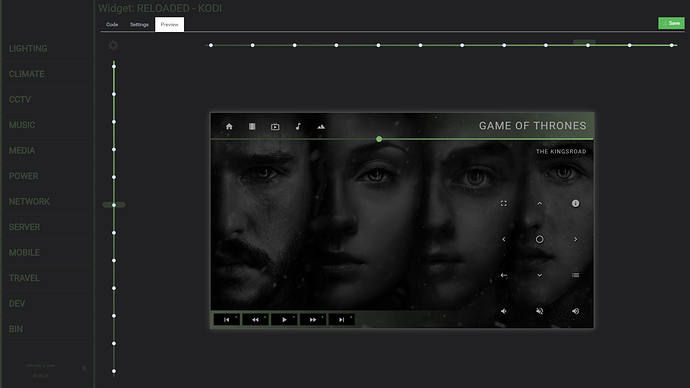 If I could get this running on my system I would test things like music and TV shows and report back no worries
where can I download it?

Generic remote: My habpannel is on a ipad mini and when I scaled the generic remote too fit my pannel the buttons ect overlap as I don’t have much screen real estate could this be fixed? Other than that the remote seemed quite nice and functioned pretty much out of the box for my 3 different kodi installs

Is there volume controll in the kodi version?

3 volume buttons, bottom right, you can see in the screenshot.

On Android at least, I change scaling options to small, in a couple of areas, and that gets the whole screen a bit closer to how it looks on the PC. Perhaps there is some equivalent setting on an Ipad?
I believe one is in display settings, and the other is in chrome app itself.
You can even disable mobile scaling all together in the chrome://flags area.

If you can show me a screenshot, I can better understand where the problem is.