Ihere is a picture as a first draft of LCARS UI. It is based on PaperUI (bower_components aso.) 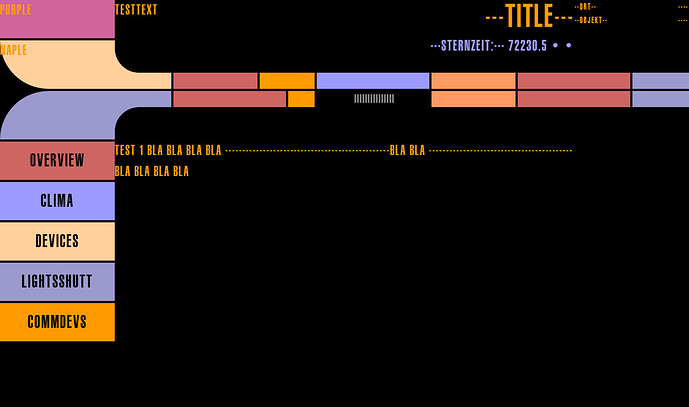 The coloring is not yet finished but based on the color table of: gtjlcars.de

Additionally I would like to add a “status dashboard” which gives a generic overview of the Object.
And a possibility to show the floor plan(s).

The current work is optimized for a 1024px width.

I’m not too familiar with Eclipse development and I just messed up my environment yesterday :-(.
So anybody who is willing to support my freaky idea is welcome to join it.

Gents:
I’ve recently restarted my activities on this idea. But for the time beeing I was working with PHP.
I need to find out how to build it with Java, if one of you could help me here, it would be much appresiated.
There is a skeleton for binding development using Eclipse but not for UI development.

I have replaced the screenshot as I changed the design.

Ha, I was just thinking about this the other day, I hope your work progresses faster than mine!

My intention was to do something similar to the ‘ship blueprints’ that you see in different scenes (but for my house, obviously) with status and control interfaces off to the side.

maybe we can work together on this?

I Just finished the first runable package, actually the dashboard tile is not yet in which means you need to enter the url manually. I didn’t find out what I made wrong here.

As it is still in very early stage I didn’t yet publish it on GITHUB. But you can download it from my site for tests. Just rename it to jar and copy it to the addons folder.

The problem following my initial approach is that my own way of thinking to do it interferes the way how the Angular framework runs. Whenever I thougt I made it nice I realized that it’s not. because there is some other behaving of angular that made my codeing look stupid.

So I need to start from begin and firstly read about how angular works. But I think even then It will be difficult to align it together due to the fact that the used elements in LCARS style follow a different goal.

If there is anyone familiar with the angualar framework I would appreciate and welcome you.

UPDATE:
Link removed, as there is no working version currently.

I am new to this and would like to know how to activate this addon.

I’m very sorry, this was effort to achieve something fancy. But unfortunately I had no time anymore to continue with it. Another story was to continues changes that have been applied to openHAB 2 in that time.

I still would love to have such UI. but with two small kids, its really difficult to find spare time.

The new design is based on Bootstrap 4 and with own style.

Would love to hear how you’re doing with this now.

Even the screenshot is in German, please keep the conversation in English. This is an international community.

good to read that you like it. Unfortunately it is by far not finished yet. And no it isn’t mean to be seen within Habpanel. The idea was/is a separate UI addon in the LCARS Design.
But developing a UI for openHAB isn’t that easy and as my developer skills are not that high, it doesn’t make it easier too. As I only work on it in the late evening hours, it needs a lot of time to finish parts of.

Currently I work on the Slider elements to make them looking good, a next one will be charts. At the moment I use a PHP / rest environment but the plan is to have a native java one. But as I wrote before Java is not one of my strengths … at least not by now.

If it helps anyone.,…

I have been playing around with the SVG approach to a HabPanel UI and used LCARS as a starting point.

This is what I have so far.

(If anyone has a suggestion on how to get a slider working, I’d love to hear it) 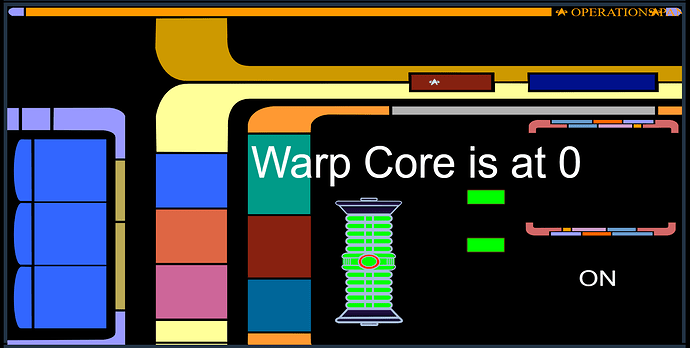 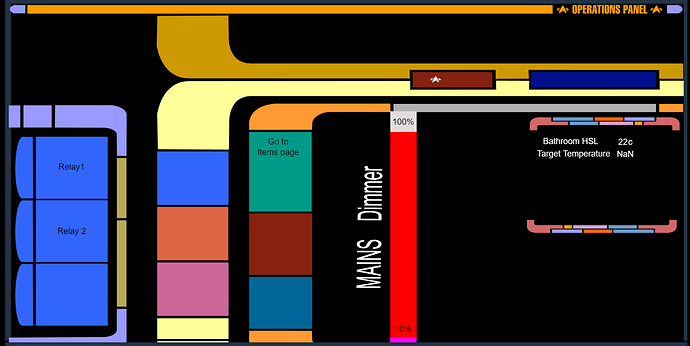 Hi all, Today a friend using Home Assistant showed me ha-floorplan - basically a way to display interactive SVGs in the web UI. Some skilled people got very creative with it - this goes far beyond floorplans since you can design your dashboard entirely with SVG! But did you know you can already achieve a similar result for your openHAB system with HABPanel?

technically feasible for habpanel. But frankly spoken some of the colors would, in my opinion, need to be adjusted and the elbows are partially looking strange, at least on these pictures.

technically feasible for habpanel. But frankly spoken some of the colors would, in my opinion, need to be adjusted and the elbows are partially looking strange, at least on these pictures.

I take all that onboard.
I’m certainly not known for my graphics skills, or programming skills for that matter.

(I dropped your jar file into OH and Karaf saw it as a bundle, but nothing appeared in the Start/Index page. Was I doing something wrong?)

–> updated package available for download from my site . rename it to jar and copy to addons folder.

Hello Stefan,
do I have to open the jar file from the console? You won’t find it over PaperUI if I have copied the file into addons.

The jar you downloaded is so outdated, that it doesn’t make sense to talk about it. I should remove that link. That version was a fork of PaperUI which didn’t work well on one hand and on the other PaperUI was never meant to be as a “normal user” interface but for admin reasons.

If you would like I could provide you my current “work in progress” framework. But it is not a OH2 addon. It is outside of it and requires you to have PHP 7.2 installed at least. Please send me a PM in case of.

PHP is a step too far for me.

I found this article that references openHAB, which I’ll have a dig around in. 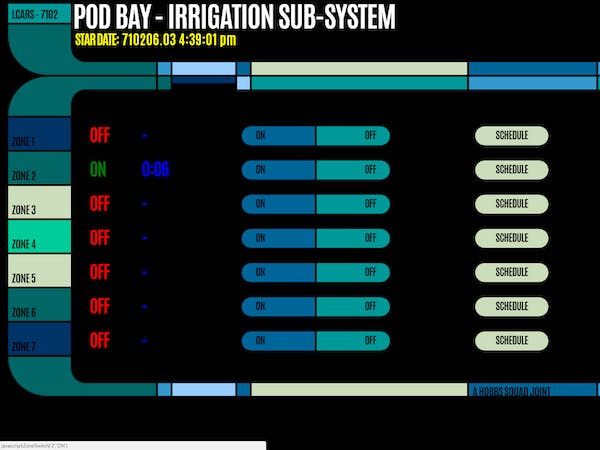 That’s great. Ho can i use openhab items in php?

@MDAR Funny to keep seeing you on the same threads, I’m guessing we have some similar interests!

I’m actually also working on an LCARS interface, built with SVGs on HABpanel.

It’s designed for simultaneous display on three screens: one is a home monitor with a map, one is a frame for displaying logs or node-RED (among others), and a small touchscreen is for controlling it all.

Just for fun, all design elements respond to a red alert virtual switch.

It’s very much still a work in progress but I am willing to share code once it’s more stable, if there’s interest.

Note: that’s a low quality video. I’ll probably put a better one up soon and will update this link.

Are you guys going to update your LCARS to match the style in Star Trek: Picard?