Hi there,
Could anyone please provide a list of working devices of Zigbee/Z-wave so far? I know the website below, but it should have a newer version.
https://docs.openhab.org/addons/bindings/zigbee/readme.html

I’ve bought several zigBee devices, often found some devices can’t bind with openhab.
Just want to make sure the device is good to use.

What controller are you using?
Lots of users have been very successful using this:

Hi Vincent,
I’m using Elelabs ZigBee USB Adapter. Actually, I want a list of devices that can be integrated into openhab.
I know some zigbee devices can not be controlled so far( such as my kwikset lock)

For zwave all zwave devices can work. Some may not yet be added to the database though and if you run into one of those you can add it to the DB and be ready to go in a few days I’ve the changes make it into the nightly builds.

Zigbee is another matter because it’s a bit let’s strict if a standard. Just because it says zigbee doesn’t mean it will work with other zigbee devices. The latest version of the docs are located here: https://www.openhab.org/addons/bindings/zigbee/#supported-things

It let’s the devices known to work. I know that Chris is waiting on a bug fix he submitted to an upstream library to make a lock work (I think it was a kwickset) to be merged so we should have support for those soon. And just because a devices isn’t in the list doesn’t gurantee that it won’t work. No one had reported that it does work yet.

Hi Rich,
Thanks for your reply. But I’m wondering only those zigbee devices (less than 20, see figure below) are test and support. There are still tons of zigbee on the market. And I think for some of the zigbee deive in the list, it’s not so easy to buy them right now and maybe unavailable. Any other latest version?
Thanks! 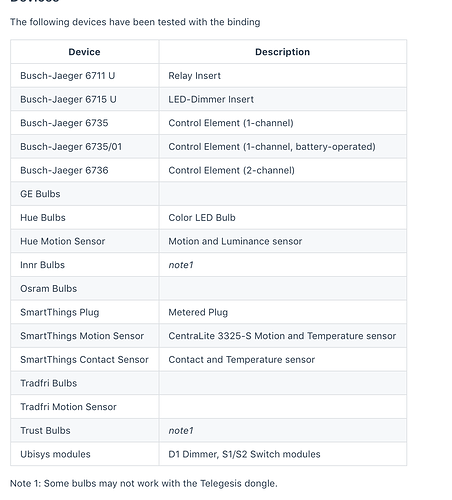 Zigbee is another matter because it’s a bit let’s strict if a standard. Just because it says zigbee doesn’t mean it will work with other zigbee devices. The latest version of the docs are located here: https://www.openhab.org/addons/bindings/zigbee/#supported-things

This is not exactly true.
I have been having (still have) lots of problems with Zigbee, with Philips hue and Osram (lightify) devices, which doesnt seem to work stable using my Elelabs Rpi Shield Zigbee controller. Problem not yet fully specified though, so this may be a controller problem, or a binding problem. Noone seem to know atm.
I believe it´s a binding problem. But it may be a combination of both.

But I’m wondering only those zigbee devices (less than 20, see figure below) are test and support. There are still tons of zigbee on the market.

In general, the ZigBee binding should work with devices that are of similar type to those listed. The document shows the list of channels and clusters supported, but of course this probably doesn’t mean anything to you, and it’s sometimes difficult to find out from documentation how the device works.

In general, ZigBee is well defined (better than ZWave) and interoperable. However there are two issues that can introduce compatibility issues -:

Generally, I would expect that ZigBee certified devices can be made to work with the ZigBee binding, even if there may be updates required. If you are using the same types as those shown as compatible, then the likelihood is very high that it will work or can easily be made to work.

A small word of warning though - there are devices out there that may look like ZigBee devices, but aren’t really compliant. These might work, they might work a bit, or, they may just not work… Try and stick to certified devices

Hi Chris,
Thanks for your detailed reply.
I’m wonder if the samsung smarthing and Centralite zigbee device are all supported now?

I’m wonder if the samsung smarthing and Centralite zigbee device are all supported now?

Yes - they should be. I’ve tested many myself, but sometimes there are surprises when a new device is released.

Generally though you can expect them to work.

Thanks, Chirs. I hope the devices should be working.

This message thread seems relevant so I hope someone can help me. I’m still new in the smart home arena. So far I have Philips Hue Hub and Bulbs working with Google Home. I have setup my raspberry pi with the latest software and I can turn the lights on off with OH although that was just a test rather than a requirement.

My next step does need a little advice however. I would like to get some door/windows sensors for security - maybe motion detectors as well. Until I came across OH I would probably have gone down the Samsung Smarththings route.

I’m not sure I understand the pros and cons of zigbee v zwave and would welcome some advice as to which one to adopt and which usb adapter to purchase for my raspberry pi in order to enable it. In case its important I’m in the UK so would ideally want to source equipment locally.

I would suggest having a search around the web - there are a lot of discussions and articles about this topic.

which usb adapter to purchase for my raspberry pi

I would suggest to Aeotec Gen5 USB stick for ZWave. There are a couple of options that plug straight into the Pi, but then if you find the Pi is too slow for your needs, you will need to buy another dongle. If you stick with a USB stick, then you can simply migrate to another machine. In reality, for ZWave, all dongles are pretty much the same as they all use the same chipset.

In case its important I’m in the UK so would ideally want to source equipment locally.

Generally, ZWave devices are much more readily available in the UK than ZigBee, although ZigBee is picking up a little, but ZWave still has a lot more variety and availability.

Thanks for this - excellent.

Regarding the performance concerns - is this an issue when u have a lot of devices or complicated rules ?

At the moment I have a dozen hue lights and the OH pi seems to be idle most of the time - is that because the hub is doing the polling work ?

Regarding the performance concerns

I didn’t mean to imply that you should have performance concerns with the Pi - many people use it and find it is fine, and many of the commercial systems out there use processors that are of similar performance.

However, yes, if you have lots of complicated rules, or lots of bindings and devices/items etc, you might find that you would prefer something with a little more “get up and go”

. It’s just my personal preference, but if you stick with a USB stick, your upgrade path is simpler.

At the moment I have a dozen hue lights and the OH pi seems to be idle most of the time - is that because the hub is doing the polling work ?

Probably, although with the right devices, there shouldn’t be a lot of polling. Unfortunately, Hue bulbs are not good at reporting, so do require more polling than most devices, but bindings should ensure polling is a background task in any case so this shouldn’t ever take too much processing power…

I see - I do have a Mac Mini 2012 doing webcam work but I don’t really fancy using it as the back bone of a home automation system as it’s been running 24x7 since 2012 and the only update it’s had is a drive replacement for a SSD.

it’s been running 24x7 since 2012 and the only update it’s had is a drive replacement for a SSD.

This sounds like a perfect reason to use it as the backbone of your home automation. It has proven itself to be very reliable, doesn’t user too much power, and doesn’t require packaging additional hardware.

I see your point , but if a pi conked out I could replace it in a heartbeat, I’d be less keen to do that with a Mac Mini. I’d really like to get the PI booting (rebooting) reliably.

I’ve posted a question on the official pi forum to see if someone can shed some light on it. I seems specific to the 3B+ so I could get a regular 3 I suppose.

If I order a Aeotec Gen5 USB stick for ZWave then I would want a at least one door sensor to play with. We have double glazed door rather than wood when it comes to fitting etc. Any particular make spring to mind ?

Any particular make spring to mind ?

My personal preference is the Fibaro devices, and they come in a bunch of colours so fit in better than most.