I’m unsing some mix of Neo coolcam, Fibaro, Aoetec and Eurotronic Spirit Z-Wave thermostat controller. All of them are working fine, except Neo coolcam PIR motion sensor. Specially they won’t wake up in configured time…
I have 4 pcs - same model, type, firmware - PD03Z (0003:108d) Firmware 3.80. They reporting all channels fine (motion, luminance, temp) but if I setup wake up period to 24h they never woke up. 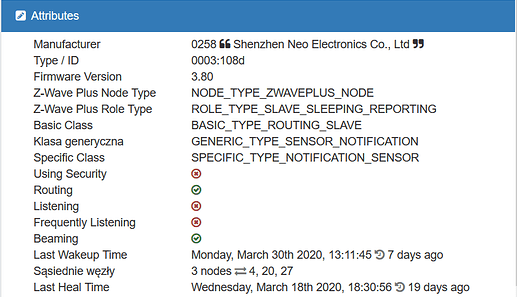 If I set time to ie. 3600 sek they wake up more frequently but they sometime loss temperature reading which gets 0.

That happend on any of 4 devices which I have. Does anyone get same situation? Is there any solution?

I never messed with the wakeup time on mine when I used the temperature. If all channels are reporting fine, what is the issue? you realize these cheap Chinese devices are far from perfect. In fact not all of that model even have the temperature sensor. I have 1 with the sensor and 2 without it.

I never messed with the wakeup time on mine

Just curious what is your’s Wake up interval? Did they wake up?

If all channels are reporting fine, what is the issue?

Just wondering… and annoying REQUEST_NIF on Habmin till they wake up. So in this case never

Chinese devices are far from perfect.

Just curious what is your’s Wake up interval? Did they wake up?

Just wondering… and annoying REQUEST_NIF on Habmin till they wake up. So in this case never

That is only needed for initial discovery and it is well known that battery devices need to be woken up several times after connecting to complete this discovery. I either remove the battery and reinsert, waking up several times, or just ignore the nuisance error. I think if the NIF is not received, the binding uses its cached data anyway.

I love these motion sensors, but yes, you can get mad configuring them, although I believe it’s not specific to Neo Coolcam devices…

The wakeup you only need in theory, for configuration.

For general use, if you set the reporting to “2” for temperature, it sends a notification for every 0.2°C temperature difference, and you can also set an arbitrary value for luminescence… So in normal use you don’t need a frequent wake up intervall (battery value will not change often).

I love these motion sensors, but yes, you can get mad configuring them, although I believe it’s not specific to Neo Coolcam devices…

The wakeup you only need in theory, for configuration.

I love them too, for this price

we have no other options

but… I’m still disappointed about wake up option. I have 4 devices same model PIR with temp sensor which seems to be reliably. But I cant understand why they are not reliable in term of wake up timer: if I set 43200 (12h) they do not wake up at all. If I set 21600sec they wake up after 24h

and looses temp reading for some time

To skip the wrong “0” values from the sensor you can use this rule, which assign the sensor’s previous (good) state:

After a while you will no longer get 0 from the sensor.

And don’t forget to ask for a partial refund - probably the only way to make Coolcam move to fix it
Btw, the same with lumen reading (0), and with their plugs, where it sends large negative values for the kWh reading from time to time, at least in the EU version, don’t know about the US version. This is also fixable via rule, but it shouldn’t be required ideally…

I have had other devices where I needed to triple press to trigger the wakeup message in OH logs. I do not specifically recall needing to do that with this item though.

I do recall needing to factory reset before including,

I saw that topic - I can succesfully wakeup those sensors manually but they wont’t wake up themselves. Well its not a problem really

I set mine to 1 hour (minimum time), and it worked (setting data was transferred). But it’s a bad idea as it eats more battery. An hour is anyway also too long, so manual wakeup is not to avoid, therefore I set all my battery devices to wake up at the longest possible time.