Ah nice - please keep us updated if it runs Tasmota

Just received an email about this. it’ll be a nice addition to light switches etc.
I am sure the various firmware versions will quite quickly update for support if it.

mines are on the way too, will share update when I receive them

Connection with mechanical switch does not work for the moment, needs more investigation in ”configure module” section?

Thanks! Mine still not arrived yet

Can you confirm if this module uses a back converter and hence separates the 3.3 volts from the mains or not?

I cant find any schematic anywhere!

This does look good!!!

Hey mate, how did you flash yours?
Mine arrived today and the solder pads are tiny!

@Bedza would you be able to do a little write up on how to flash it using the “DIY API” mode? I read some some manuals and it seems pretty complicated…

Okay I think I may have figured it out…

Then found and watched this super blurry video…

Then there is a small jumper that comes with the device and you need to install this. This will make it connect to the wifi access point you just setup.

I then downloaded this DIY tool and connected my laptop to the same wifi network.
https://github.com/itead/Sonoff_Devices_DIY_Tools/blob/master/tool/tool_01DIY85(v3.3.0).exe

The video showed a button that lets you upload your own firmware… The tool doesn’t have the same button but does have one called “Brush machine” which seems to do the same thing. I used it to upload the tasmota minimal binary.

Hi,
I have used four needles and flashed as it would be Sonoff basic. On the internet there is also Picture showing soldering Sonof Mini. I have not tested the DIY method.
My Sonof mini is working for couple of days without any problém.

@Bedza did you also need to push the button as you applied power to put into flashing mode?

Those things are super small, two in size of one basic and heigh is bit lower than basic as well.
Flashing is super easy, push button, connect ftdi, release button, flash and enjoy tasmota 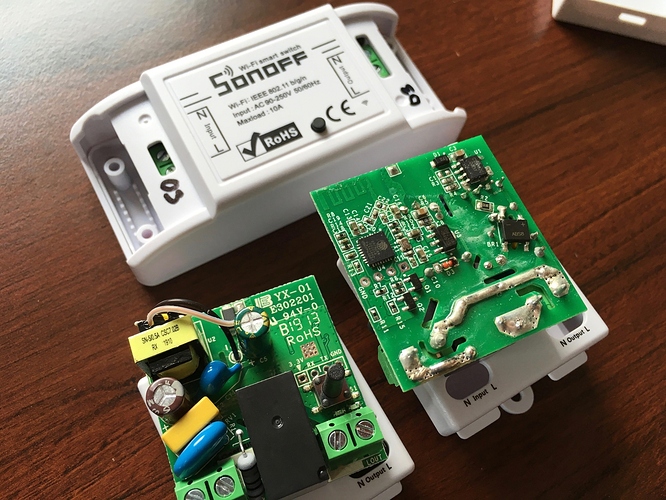 @TommySharp “dyi” mode is crap, you need to install their app, allow to access internet etc.
you can check this video:

but you really do not need any soldering if you are not comfortable with it, just use headers and hold it till flash is done

Hi, could I use this to control blinds with the Tasmota firmware? Sure it can control both channels (up and down) but would it be able to recognize / learn the end point switches or the signal when the motor hits the final maximum position? Like with a Fibaro and likewise?

I am going to use 3x mini to control shaders (Somfy). three buttons: UP, DEFAULT(or stop), DOWN.
Pulsetime=3 in Tasmota console settings.
No limit points to be checked (not aware of better solution). This will work with Homekit.

Any other idea on using Sonoff mini would be appreciated.

Any other idea on using Sonoff mini would be appreciated.

You could use the Shelly 2.5, event supports Mqtt out of the box.

Im going to set fire to mine, seriously sonoff are morons. Why did they make this so hard.