I just noticed an inconsistent visualisation of dynamic icons when I compare my web layout to that what is shown in the iOS app: 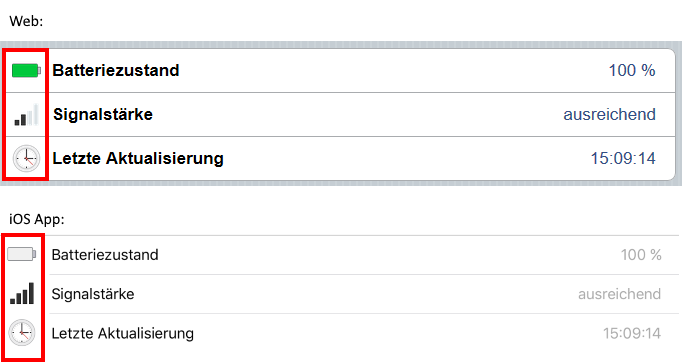 Is this intentionally that way - or is it just a bug or missing feature in the app?
Just wanted to ask before I file an issue on GitHub.

As there hasn’t been any updates for quite a while, I would assume it’s a bug as the App hasn’t found any kind of optimizations for OH2 yet (AFAIK).

belovictor has taken care of the App for a while but I think that may changed. I saw digitaldan doing some minor adjustments lately.

You should file an issue…

for reference: Icons no longer updating in BasicUI

There does seem to be an issue with BasicUI

But this is about the iOS App. Or do you mean that these two issues are related? Fixing the BasicUI issue would automatically fix the iOS issue?

I haven’t seen the iOS App for an OH2 installation yet. In OH1, the iOS App uses the ClassicUI (as it is the only UI). Can I toggle between the both UIs in the App for the OH2 version?

It’s not a BASIC UI (or a CLASSIC UI like I’m using) problem in general, because when I open the site on my iPad using Safari, everything looks fine. That means to me, the iOS app gui interprets the icons differently than the web gui.