Now, the Channels are empty again

Hi,
I had (have) a similar Problem and it was (almost) working in OH 2.5.
In OH3.0 I lose my KNX-Gateway all the time (offline / online) and the KNX device is allways offline. Now I can switch off the light but not on anymore ;-(

For me it worked when I left all fields default except Network address (IP) that I set to my knx network unit.

For the devices I get trouble when using Fetch.
So for devices I just set Label name, and choose the bridge. No adress.

Under the device I can create my channel with its group adress.

For a router configuration you do not need to specify much. Routers use IP multicast communication and for knx these addresses are all default presets and need not be given in the configuration. So for a router it is sufficient to have such a config:

For an actor you need the physical knx bus address and for the channels the group addresses. Just like with the textual configuration in previous versions of openHAB.

Here is the configuration for one of my dimmer actors showing one channel:

I cant seem to get it working properly. It works on and off, sometimes with a lag, sometimes not at all. Polling knx-status is also sketchy for my dimmers.
I am using the same setup as with OH2. Also I get the feeling OH3 affects the actors as some lost connection to Ets and I had to make the Knx-bus powerless for a reset.

In channel setup, what difference does the actor address do?
When adding half of my actors show offline.

In channel setup, what difference does the actor address do?
When adding half of my actors show offline.

The difference is described in the official documentation of the KNX binding under the Things section:

If the physical address is given, the KNX bridge tries to ping/read the actor via physical address. Also there is described, that either all or no device should be reachable (online) because KNX is a bus. If you reach the bus, you will reach the devices.

Yes ok, thanx. I read it several times but dont seem to get it

I think the items gets updated booth good and bad either way I try. And some actors online, others offline. Maybe Im not consequent enough thru my testing although Im trying to be.

If this is the case, then I guess it is a network problem. As described in the KNX binding docs, either all physical addressed actors/sensors are reachable or none of them.

Can you give some more details of your network setup including router, IP assignment and IP gateway?

After more test it seem to be my knx weather station that disturb my knx bus. Very strange errors increased since Christmas and my work with OH3. OH2 have been very stable before that. But when ETS5 couldn’t reach or update some actors I first thought it was because OH. But I guess just my weather sensor lived on the edge. It sends values but also error messages that disturb to much. This is my research right now

Hi @djoope , I have the same problem as you. Once I removed the individual address from thing, the device came online. Can you make screenshots on how you did the setup of channel and points? Here is my KNX Thing (actuator), I use it to control all some of the lights (On/Off) and dimming functions. I find the documentation not really clear so I am stuck at this step. I wanted to try editing the config files, I can’t get to create a token. Another error, that I don’t get. My setup is on RPI4
Thanks 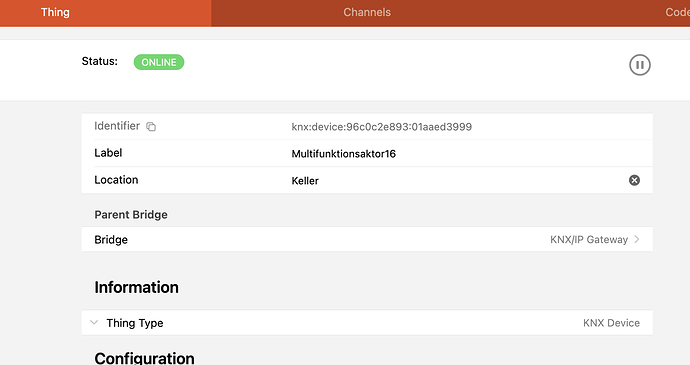