I need your help and support regarding my openhab/velbus installation:

-I’ve done a fresh install on an new server with the same openhab version 3.2.0 as my old server

-After restoring that backup —> blank page + service disconnecting in loop every few minutes, so I gave up…

I decided then to configure everything from scratch on the new server:

-I’m stuck at the bridge detection: it is a Velbus USB Serial Bridge, “VMB1USB” over the usb port “port”: “/dev/ttyACM0”

If I remeber properly , few years ago , this one just appeared in the list then I just configured it according the Usb port etc…

-I’ve added a VMB1USB.things file with the line below, in /etc/openhab/things and rebooted but still can’t detect it:

The difference now VS few years ago is I have the Signum: this one appears automatically in the things

Did the signum took the preference over the VMB1USB? I don’t think so…both should be seen normally, no?

Also after a Scan, I cannot detect the other devices thru the Signum : tried both 80 and 8080 ports which are green and 27015 : red
Just to remind you that the Signum is the Velbus Server solution based on a Raspberry motherboard, it has both Network and Serial Bridge function.

I can only add manually but VMB1USB is not present as it is a Bridge.

Do you think that it could be because of a Velbus addon update that removed the VMB1USB?

Maybe it is something obvious but I can’t see it!!!

I’m starting to be out of idea.

Okay, I’ve not tried to link openHAB with the USB port on Signum, I’ll give it a try.

Port 27015 is the Velbus port, however it is a secure port with TLS & SSL, which openHAB Velbus binding doesn’t support right now.

My advice would be to add the official Velbus Snap package to your openHAB machine and connect using a Network bridge on 127.0.0.1, after you have set up Velbus-tcp correctly. (Obviously removing the Serial bridge)

You can try this script to install Velbus-tcp

You can then connect openHAB Velbus Network bridge with

Thank you for your quick resply, appreciate.
I’ll give a try.
But still I would like to know why teh Usb-Serial VMB1USB is not seen or detected to allow me to configure it over the /dev/ttyACM0?
When attached to the new server on the sub port and if I invoque the command:
ls -l /dev/serial/by-id/usb-Velleman_Projects_VMB1USB_Velbus_USB_interface-if00
it returns:
→ …/…/ttyACM0

When attached to the new server on the sub port and if I invoque the command:
ls -l /dev/serial/by-id/usb-Velleman_Projects_VMB1USB_Velbus_USB_interface-if00
it returns:
→ …/…/ttyACM0

I’ll confess that I haven’t used the Serial bridge for many years, I tend to use VelServ or Velbus-tcp as a gateway, so that I can connect multiple times to the same USB.

What are you entering for the /dev/ttyACM0 in the serial bridge?

What I think is that the serial device detected in the things is also the Signum, as this one has several hardware function according to its specs, if I’m not wrong.
The VMB1USB, should normally appear has USB Serial Bridge, like it is on my NAS Openhab instance.
This has been confirmed after the 1st openhab and velbus binding install, at the add Things step, WITHOUT the VMB1USB being plugged in the usb port and not powered by +12V.
I had that:

For me this picture is showing the 2 hardware functions of the Signum (Network+Serial).
If I would like to add a thing on my previous openhab instance on my Nas, I have the exact same double device bridge, but with the VMB1USB already installed and online, as the unique bridge for my installation.

Below, is how the VMB1USB appears and is configured on my NAS: 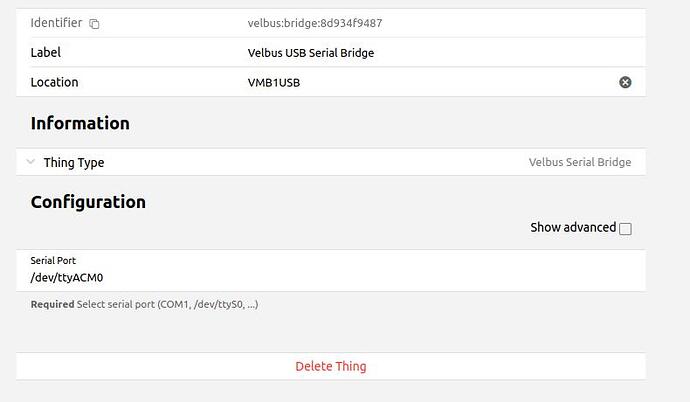 But again why the VMB1USB (Velbus USB Serial Bridge) doesn’t show up on the new server freshly installed?
Did they removed it from the Velbus addon?

serial device detected in the things is also the Signum

Just for clarity, Velbus Bridges like most system bridges aren’t detected they have to be manually installed.

The fact that the Serial bridge defaults to ttyACM0 is purely what the developer set it to as a starting point.

Likewise with the Network Bridge, you would have to configure it to suit your system.

As far as I’m aware, they are exactly the same thing.

USB presents as a Serial port to the computer, so no difference.

So we come full circle back to the original issue.

I’ll plug my Signum USB port into a Linux machine and see what happens and what Linux calls the USB device.

My issue is I can’t add the VMB1USB serial bridge. 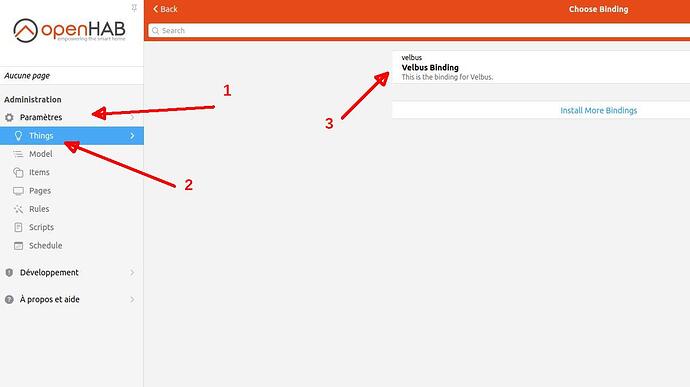 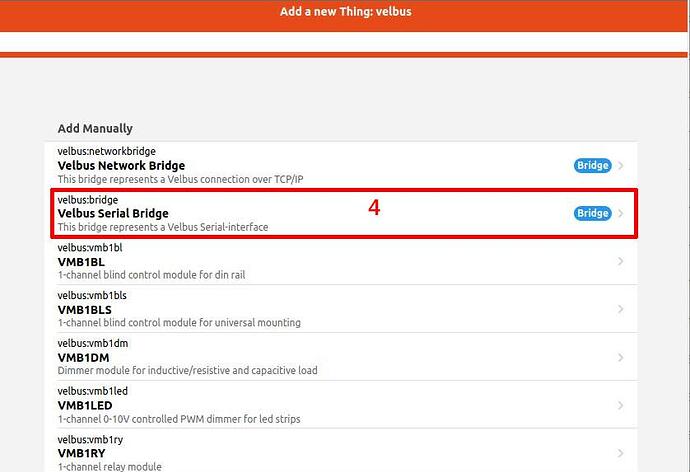 to finally get that: 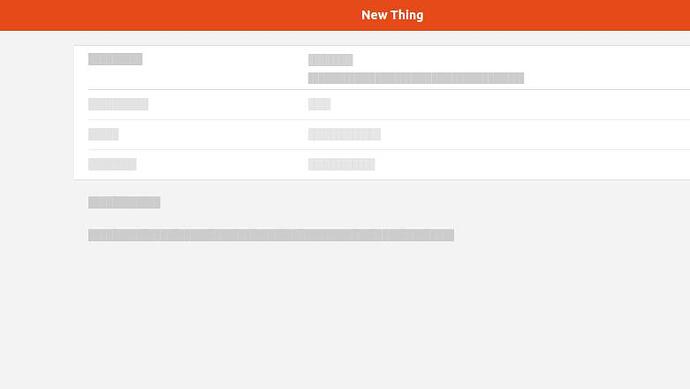 That screen stays forever if you let it …
More than that, it is kind of freezing the openhab service:

here is the status of the service when get that freeze, It looks like the karaf process is down!:

Have you tried creating a text based Things file for the bridge?

Something as simple as ----

I’ve also tried with your text line: Bridge velbus:bridge: VelbusSerial [ port="/dev/ttyACM0" ]
unfortunatly it still the same situation: freezing when trying to configure the detected serial bridge + not showing the USB Serial one (VMB1USB) on that server.

On the other hand, on my “old” server ( NAS ), now it sees all 3 bridges ( Network, Serial and USB-Serial ) and as I’ve installed the Velbus.sh script, but I’m still not able to control all my things and my home installation thru the Signum (Network and Serial), even if everything is online and green.

After what I went on all the offline things and changed the parent bridge as so, to turn the Online: 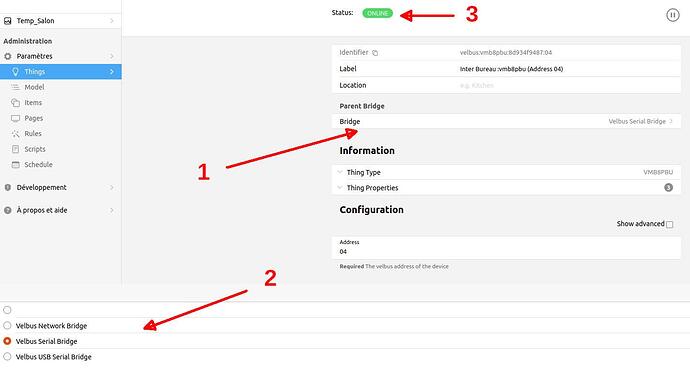 I’m a little lost as to how to help you as there are a few details about what you are trying to achieve that confuse me.

My advice would be to connect to your network using a Network bridge, then multiple instances of openHAB and Velbuslink can connect.

As to why openHAB is hanging when you add a serial Bridge, that is a complete mystery to me.
It’s not something I have seen before or able to re-create.

This is what I see when connecting a VMBRSUSB and a VMBSIG via USB cables to a machine.

I really want to help, I just can’t work out how to.

If it helps, this is how I have the Velbus snap package configured, so that I can access the Velbus network from anything, from anywhere on my LAN

You can easily use that command to swap between USB or RS232 connections, if you have multiple isolated Velbus networks.

I see an issue here, but more about understanding what you are doing.

I can’t confirm (at this time) that the openHAB Velbus binding works with the Signum device via TCP.

Your Signum exists on your LAN with a unique IP address.

If the Signum’s instance of Velbus-tcp (or the python equivalent) works with openHAB, you would need to use port 27015

This assumes that the Signum isn’t expecting a TLS Authorisation key, which openHAB can’t provide at present.

Port 6000 was an arbitrary number I dreamt up years ago, when we were working exclusively with Velserv for TCP connections. (VelServ can be set with any port number.)

So if you were running VelServ on the same machine as openHAB, you would use the localhost / loopback IP address of 127.0.0.1 and port 6000

Now that I have swapped over to the Velbus official Snap package, I configure an unsecured Loopback port at 6000 and a secure LAN port at 27015 with a TLS password for Velbuslink or Control4 (as an example)
(As you can see in my previous message)

For me this picture is showing the 2 hardware functions of the Signum (Network+Serial).

I think I may have spotted another misunderstanding.

What you have shown here is the ability to manually add a bridge of your choosing.

As stated in the binding documents.

You must decide how you want openHAB to connect to your Velbus network.

Ensuring all requirements are met.

Looking closely at this screen shot.

This is a Velbus Serial bridge, that You / Someone elected to name “Velbus USB Serial Bridge”

Which explains the later confusion.

I’m back with some fresh news:

So based on that I’m assuming that it is kinda hardware limitation on the other server, that prevent it to open the “serial bridge” page under things…
that server is the sheevaplug that I was using as server with the HomeCenter installed on it.
The hardware specs are:

As you may know better then I: This “plug computer” was shipped with [Ubuntu 9.04], which was the last or the only available version for the ARM 32sf architecture.
I think that Stijnen who has developped the HomeCenter for Velbus, did it on ubuntu 9 VS me over Debian 8,9,10 and 11. (tried them all)
Do you think that It could be a ubuntu 9.04 VS Debian X issue? I don’t think but who knows?
Or something else in the install? Any clue/advise or idea is welcome.

Unfortuatly I was unable to find ubuntu 9.04 for arm32 (uImage/uInitrd for UBoot) , even after many hours of research…
So if some knows where to dowlnload it or have it, please share just to give a 2nd life to that Sheevaplug Computer.

scanned my local installation : which has detected all my modules successfully

Proves that everything in the Velbus realm works well.

that prevent it to open the “serial bridge” page under things…
that server is the sheevaplug that I was using as server with the HomeCenter installed on it.

That explains a lot.

just to give a 2nd life to that Sheevaplug Computer.

If you try a Debian OS, can you run VelServ or Snap Velbus-tcp as a gateway to the USB device, using the /dev/serial/by-id/velleman-xxxxx path.

Just a quick update I’ve created a small script to automate the installation of this Snap package. It should also add avahi and broadcast the presence of the Velbus bus connection www.mdar.co.uk/dl/velbus/velbus-tcp.sh mkdir /opt/velbus-tcp cd...

Then use the Velbus Network Bridge in openHAB?

(From another machine, before you install openHAB on the Sheevaplug)

And try connecting Velbuslink over the LAN to the Sheevaplug.

I see a bright future for it, in a glass cabinet with a couple of spot lights on it, maybe with a plaque under it, explaining how our ancestors used this cutting edge device.

Or you could use it as a paperweight?