I have some issues with myopenhab , at first I thought it was me, especially as the status page say this. 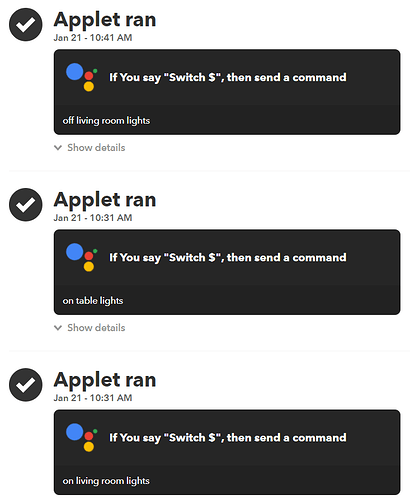 image.png752×133 3.51 KB
I concluded that it can’t be me if messages get lost between IFTT and myopenhab.
This is not a one time thing, just using this one as an example.

Yet the status page says everything is working fine… No announcement in the forum either.
Any news on this?

I was just about to post the same… something is definately wrong with myopenhab since the maintenance.
Since yesterday my google home integration is not working at all (GH --> IFTTT --> myopenhab)
If I update an applet on the IFTTT side, it sometimes it seems to work again for that applet) but not for long… I actually just deleted my myopenhab account and re-created it, but I see still the same behavior.

Can someone please check this?

Since yesterday no connection via remote URL in iOS App.
IFTTT and Alexa also not working.

I haven’t used IFTTT in a while as I have moved apartments. Got a second google home yesterday to start implementing voice commands again. It seems that like 1 out of 10 voice commands actually trigger openHAB.

It’s not the classic “it sometimes takes ifttt 5 mins to complete the request” as just saying the command again over and over seems to work and waiting for an hour doesn’t do anything.

IFTTT triggers but either doesn’t message openHAB OR openHAB refuses to listen.

Was scratching my head quite a lot over this, glad I found this thread.

Anyone know who we should poke about this? @Kai @martinvw?

Yes indeed: it is not " just slow" it drops some of the commands.
Looking at my logs, in the past nights I have had myopenhab switch offline/online a number of times.
Next to that google assistant does reply in the way I expect (as defined in IFTT).

All IFTTT commands are lost and no remote iOS app connection.

+1 here. Remote connection is unreliable, OH2 goes off- and online every couple of hours. Seems the service finally reached the limit…

I wonder where the resources for the servers come from.

I’m trying to support openhab with the “amazon smile program” as mentioned sometimes.

For sure these resolves only financial issues - may be it helps a bit.

I wasn’t aware openhab could be selected in amazon smile, so changed that to openhab too. And I decided to finally become a member to support the foundation…

not the openhab cloud - rather the hole openhab project

Am I the only one seeing OH2 service restart on its own will every now and then, just after a disconnect-connect-cycle?
Weird.

Probably yes. Something needs to be done about these problems, wouldn’t even mind a small monthly fee as I’ve put lots of money into a system that I now have no power over to personally fix as IFTTT can only be set to myopenhab.org not a self hosted instance.

Hi all, i will look at this today, it seems like the IFTTT routing is not working correctly, I’ll post back here with more info.

Hi, there was an issue with ifttt command routes and our new infrastructure setup, a fix was just deployed and ifttt commands should now be working.

Thank you very much for fixing this! I can confirm that everything seems to be back to normal

Anyone else has problems with authorization after this new infrastructure setup? I have unknown user or password problem both on the website and android application. (“User authentication has failed”)