let me please point to the reply I posted 8 days ago when I tried to get help with my habmin/razberry problem.

If further informations (log-files) are required, please let me know.

when I tried to get help

I saw that post a couple of days ago, but it looks like you did nothing wrong.
In the meantime I did several new installs and never encountered that error again.
If nobody else answers to your problem, I would do a complete new install before wasting too much time.

I already did a complete new install the way I described in the other post.

To me it feels like the problem depends on the raZberry-board being connected to Raspberry Pi3 by port = /dev/ttyS0.
But because z-way is able to include and exclude devices, I think /dev/ttyS0 should be ok and also the raZberry hardware should be ok.

Should I try openhab2?

Should I try openhab2?

Why not. Put it on a separate sd card and then you are always able to switch back with just a card change.
To do a quick install you could use

Introduction The Raspberry Pi and other small single-board computers are quite famous platforms for openHAB. However, setting up a fully working Linux system with all recommended packages and openHAB recommendations is a boring task taking quite some time and Linux newcomers shouldn’t worry about these technical details. A home automation enthusiast doesn’t have to be a Linux enthusiast! openHABian aims to provide a self-configuring system specific to the needs of every openHAB user. Ready to…

@ThomDietrich
your openhabhian-hassle-free-rpi-image exactly fits my needs because I’m a newbie to almost everything. (raspberry pi3, linux, openhab and zwave)
Reading your guide, you immediately got me with „A home automation enthusiast shouldn’t need to be a Linux enthusiast!“ By the way, I appreciate what you are doing. Thank you very much.

Today I started trying to follow your guide step by step. 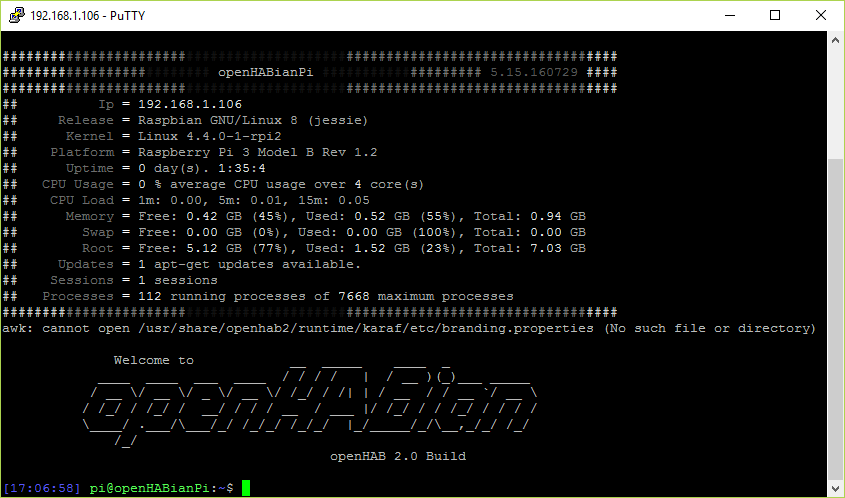 Did I made something wrong?

Did I made something wrong?

No, not at all, it’s just broken at the moment:

Warning (apt) I want to emphasize, that apt upgrade is currently in fact breaking your openHAB system. This is a short time error which will probably be solved soon. Please stay clear from upgrading for a couple of days. In all cases this is only a temporary problem and you will be able to apt upgrade to the soon to be released working release. Updates to follow.

What a shame! You did everything right and still no success. How disappointing, right!? Don’t worry, this doesn’t happen normally and will be resolved soon
As you can read in the other message, there is a problem right now. You have two options: Wait for 1-2 days till the next working release is available and start anew OR you follow this fix we hacked together here. Whatever you do, pay close attention to both threads to know when the problem got solved and what you might pay attention to:

Thanks for the nice writeup btw…!

„A home automation enthusiast shouldn’t need to be a Linux enthusiast!“ -> I didn’t even know I wrote that. Thanks I’ll put it in the first posting

I did a complete new installation this week, and it works!
At least, I solved my basic problem “openhab didn’t recognize the raZberry-board” by changing from openhab1 to openhab2.

If there’s someone out there with Raspberry Pi3 and RaZberry, also
struggeling with z-wave-installation like I did. The following may be useful.

Here’s what I did, step by step:

Ok, hope I didn’t forget something.
That’s it. Now I’m ready to use.
Next step on my list: Install and learn, how to use HABmin.