AFAIK you cannot send ANY command to a group

I’m pretty sure groups can receive commands, for example a light group should accept OFF command and remit this to all direct group members.

According to the docs and examples you can…

Right, ok.
Now that you mention your group is composed of items of different type, that might be your problem. I believe a dimmer will not accept OFF just as a switch does. Try with a homogenous group.

As an item of type dimmer accepts ON and OFF, an assorted group of dimmers and switches should also accept ON and OFF

The plumbing of what Michael is trying to do should work.

You can indeed send a command to a Group and the command will be forwarded to all the members of the Group. If do this all the time. @mjcumming, I don’t know however whether that command will filter down to subGroups. Are you using nested Groups here?

And a Dimmer Item can receive ON/OFF commands (from https://www.openhab.org/docs/configuration/items.html#item-definition-and-syntax):

The third column defines those command types the Item can accept.

One thing that does pop out as a potential problem is we may not be able to have a binding config on a Group. The Group docs (https://www.openhab.org/docs/configuration/items.html#groups) does not include any { } clause. Since Expire is a binding I’m thinking that what you would like to do is not possible. The error you report is surprising though. I would have expected to see syntax errors when the .items file was loaded.

This is an interesting use case.

I am trying to find an easy way to use expire to turn off lights in a room when nothing has happened in that room for a period of time. Have read a lot of your posts on DP and would really like to find a solution along those lines.

Another example I am working on is our Mudroom. In that room I have a closet light (switch) a dimmer (overhead lights), motion sensor, and a door contact. I would like to use any event from those 4 sources to say that the room is occupied. If there are no events from any of those sources for 10 minutes, then turn off all the lights in that room.

Below are a few screenshots from a Occupancy plugin I wrote for Girder about 10 years ago… it accomplished all of this by using Locations within the house, the devices/sensors in that location to set when the room was occupied, each room would have a preset decay rate, and when empty, the various devices could be set to turn off …. 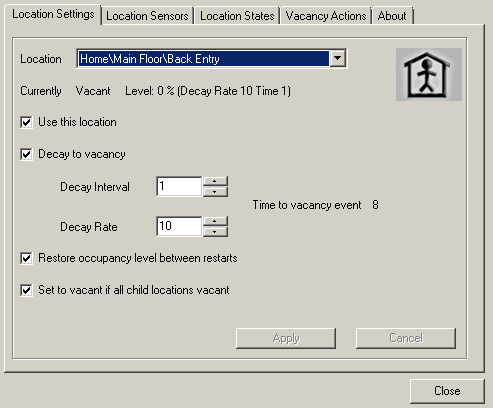 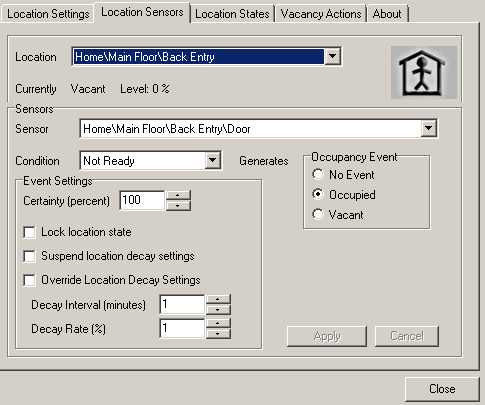 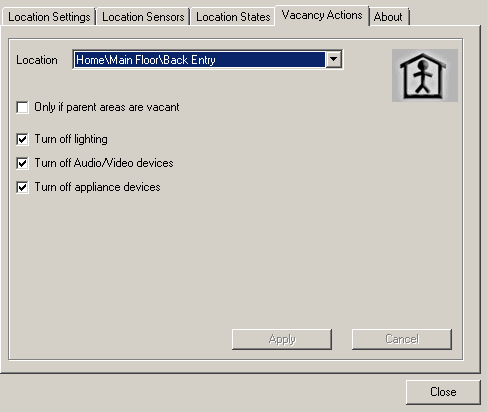 am trying to find an easy way to use expire to turn off lights in a room when nothing has happened in that room for a period of time.

Please see Design Pattern: What is a Design Pattern and How Do I Use Them for details on how to use DPs. Problem Statement Many motion detectors only report ON when they detect motion but do not send a corresponding OFF after no motion has been detected after a period of time. In addition, often one wants to control a device like a light for a certain period after the last motion is seen, not after the motion sensor goes to OFF. Therefore one needs to keep an occupancy switch ON (or Contact OPE…

Problem Statement Often one will have a number of separate Items which are all related to each other in some way. For example, one might have a Contact on a door and a DateTime to represent when the last time the door was opened. This is easy enough to keep track of if there are only one or two such Items, but if one has a lot of similar Items or is using a lot of genetically coded rules where one cannot hard code the names of the associated Items inside the rule mapping between the Items become…

Theory of operation: When any sensor updates, use Assocaited Items to send a command to the associated Timer. You may need to do more checking here to make sure the update indicates presence. When a Timer Item expires another Rule runs which sends the OFF command to that room’s lights. You may need to loop through the Group and send a different command depending on the Item type. If you do you need to pull the Group out by name:

The magic happens by using the Associated Item DP naming scheme and Groups so you can use the name of triggeringItem of the Rule to access the Items you need to interact with.

@rlkoshak Rich, how would you see a couple of things using DP.

All rooms are “assumed” by the system to be vacant because no activity.

This becomes useful say when at sunset, you would like certain lights inside your home turned on but only if you are home.

But, also imagine the opposite, when the home is vacant. If someone approaches the house and an outdoor motion sensor sees that person, you could have that event turn on an inside light (often nice when coming home to a dark house or to scare away a trespasser). The problem in this scenario, is turning on that inside light will change the status of the home from vacant to occupied. So we then need a way to “lock” that state of the home while turning on that light so there is no change in occupancy.

As I mentioned above, I have done that before, but this looks daunting in openHab especially since the DSL offers essentially no debugging or test environment.

If it is night and the light was turned on by a Rule you know not to change the occupancy switch for that room.

Just send an OFF command to the Group that contains all the Items that indicate occupancy.

For a setup this complex you will probably want to use a bunch of proxy items so you have some control over how the events propigate.

Can I use the Expire Binding for a duration of a year? I have a thing that needs to be replaced once a year. I’d like to put a reed switch on it so that when it opens the expire bound switch turns on. Then after a year the switch turns off… sending me a notification.

Also, does anyone know what’s the max duration of the expire binding?

Can I use the Expire Binding for a duration of a year?

Good point. Also the documentation for the binding says that “The Expire binding accepts a duration of time that can be made up of hours, minutes and seconds” which kinda makes me think it’s not made for really that long periods. I’ve never used it for anything longer than 15 minutes.

why not set a persisted date item with the date the reed switch opens. Then, have a cron rule checking every week whether the date item is a year old.

An other alternative to the suggestions by @greg and @dan12345 you can use a Timer and persisted date Item.

See Design Pattern: Encoding and Accessing Values in Rules for how to set your DateTime Item or Individual Alarm clock for each Day of week, with adjustable duration if you want to adjust the date from your sitemap.

Then you just need a System started Rule:

Then you don’t have to poll and the event will occur exactly at the right time.

That often doesn’t matter but in this case it would. You could have OH running for 6 months and then it restarts and now the Expire timer would get reset for another year.

@greg I think the google calendar idea is a great solution. I’ll definitely check into it if I have other uses for it. Seems unnecessary to use it for just this one situation.

@sihui @DanielMalmgren Thanks for informing me of that. I thought expired items survived a reboot since I have persistence set up.

@dan12345 Good suggestion. However, I want to keep the cron rules to a minimum.

Correct. Like the Expire binding, Timers will not survive a reboot of OH so you need to use persistence to save the time you want the Timer to go off and a System started Rule to recreate the Timer when OH restarts.

Got it… I had to read the system started rule a few times to get it. Thank you

I gave it some thought and decided to go with the cron to check every Friday. @rlkoshak I looked at the referenced threads… to be honest I don’t understand any of it

Wish I did! I would like to understand more about the nuts and bolts, if you will, about programming, but don’t know how or where to start.

I have an idea about what I want to do… would you all kindly check this out >> [SOLVED] Thermostat Rule Help (gpio, dht22, exec binding, things, items, rules)

Any suggestions on what I’m doing wrong would be greatly appreciated! Thanks