Problems with Zigbee binding since Openhab 2.5.10?

since a couple of weeks i have the problem, that all zigbee_neighbors = [] and all zigbee_routes = []. This is the situation for all zigbee devices and the coordinator cc2531.
I have this problem since

To solve the problem i restored a openhab backup (done with openhab_cli) and then the zigbee_neighbors were there again, even with openhab 2.5.10. Then i changed properties and added the ikea plugs and the zigbee_neighbors disappeared from device to device.
It is strange that i still can see all items online in PaperUI. The zigbee network is working fine, I can switch the plugs, light, etc.

Then i bought a new CC2531 stick, removed all zigbee things, removed coordinator, uninstalled zigbee binding, installed binding again, flashed stick, added coordinator, added all zigbee devices. Then network is working, zigbee items are online, I can switch the plugs and lights - but there are no zigbee_neighbors.

This is strange for me too, but it is the only conclusion if have.

My feeling is, that the zigbee_neighbors support broke in openhab 2.5.10.

I don’t think there have been any changes. Certainly the main zigbee libraries have not changed in 2.5.10, but even if they had, the neighbour table code hasn’t changed for a while.

I checked the log with debug switched on for zigbee, but found nothing special

What do you mean? So the neighbour requests are working fine then?

In PaperUI and in the /rest/things the zigbee_neighbors = []. Is this normal in a zigbee network with 6 items that are online and working? Can this be true?

I am not an expert for the log and the opensmarthouse.org loviewer seems to bee down, but i searched the log for “zigbee” and found no problem there. But maybe i only do not see it.

Can this be true?

It depends on your system. For starters, do you have updates enabled? If so, how often?

i searched the log for “zigbee” and found no problem there

So it is requesting the neighbour updates ok or not? It’s really hard to comment - if you say the logs show everything is ok, then I don’t know how to respond.

Can you help with the log? Shall i upload it? Shall i search for some text?

Shall i upload it?

Sure - I’ll take a look. Hopefully the log viewer will be back up later this afternoon

For starters, do you have updates enabled?

What is this? Where do i have to enable updates? Maybe this is my problem.
Is it the “Mesh Update Period”? If so, it is 1 Day. But i also tried 30 Mins.

Exactly - if you set it to 1 day, then it will only try to update the mesh information every day.

Okay, i changed the Update period to 5 mins. This was 47 mins ago. In the log i see:

I can see no other effect. zigbee_neighbors and zigbee_routes are still []. zigbee_lastupdate is still “”. Is there a log message, that shows that the mesh update is executed.

Try restarting the binding - it might be that this cannot be changed dynamically. Otherwise please provide the debug log so I can see what is happening.

How can i restart the binding?

Use the console restart command (if I remember correctly) - get the list of bundles with the list command first.

Or just restart OH, but that’s a bit more hassle I guess.

I am happy, but i do not know the reason for the problem. I only changed the Mesh Update Period to 5 mins to solve the problem. Before i had a period of 1 Day and the problem was there for more than two weeks. So the Update should have been done in this period also.

Yesterday i reinstalled the binding and all devices. Maybe this solved the problem. And since yesterday there was no period of 1 day for the mesh update.

I was happy to early. 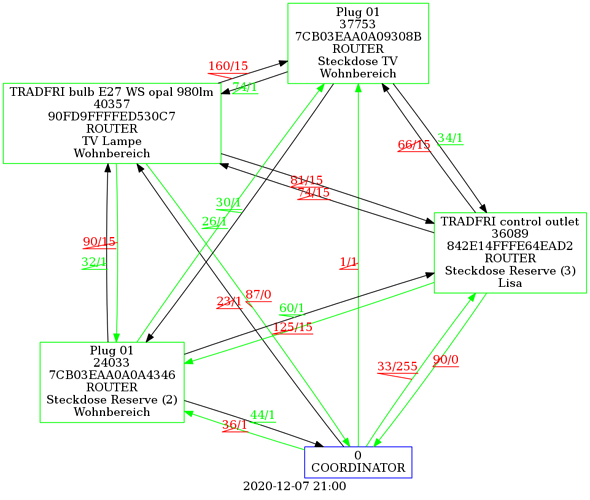 Unfortunately after a while the zigbee_neighbors and zigbee_routes of the coordinator and all devices disappear. And then also some devices go offline. 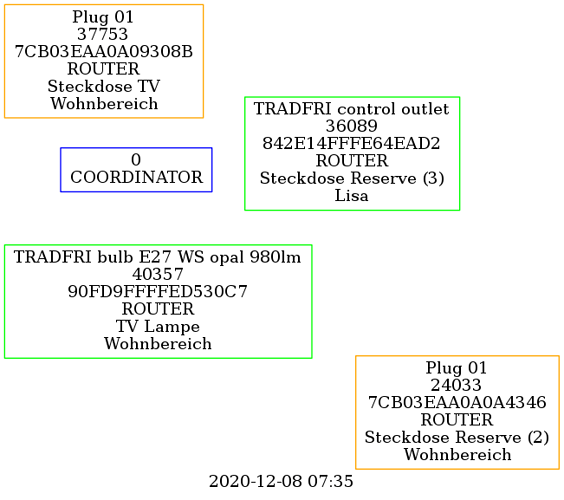 I am facing the same issue you discribed in your post. At the beginning I thought it is somehow an issue with my setup (at that time i was running the CC2531 via a serialproxy), but had never seen the connection with the update to 2.5.10. Before there was no reason to complain, everything worked in the OH were also neighbor information etc. to see

Most of the time my zigbee bulbs are toggled by a remote and controling it via OH was a less used minor function.

Starting playing around with OH3 I picked up the issue to give a try with a fresh OH3 on a Raspi2 with a CC2531 USB Stick as coordinator. And I exactly ending up in the same behavior as you described. Anything is working until the mesh update periode expires. Routes and Neighbour Informations are never “visible” in OH3 and Things become offline after mesh update.

Have you gained any new insights on this topic ?

I have one hint, that might help to find the reason for the issue. When i change to Zigbee2MQTT i had to reflash the sticks firmware with same firmware. So i think there was something damaged on the stick (parameters, tables, etc.) and this happens when running together with the zigbee binding. With the zigbee binding i reflashed the stick also a couple of time, but withou any success. @chris maybe this information is important for you.

I regularly check the changes in the zigbee binding and my indention is to change back to the zigbee binding when the issue is solved, because i think this should be the standard for zigbee with openhab. But at the moment i have no preassure to do so.

I’m not really sure how you reflash the stick with the binding? It doesn’t support reloading the firmware in the CC2531 devices - only Ember devices.

@chris maybe this information is important for you.

Thanks for reporting - I’m not sure I can directly help a lot with the 2531 devices as I use the Ember chips, and nearly all commercial customers also use the Ember chipsets. I did support one company a couple of years back who used the 2531, but they then moved to Ember as well. I know the DT use the binding, but again, this is with Ember coordinator.

I used the TI flash programmer software to flash it. I wanted to say that i reflashed the stick serveral times while i used the zigbee binding. So the reason of my issue cannot be one bad/wrong flash procedure.

I totally share your opinion. I think this problem is related to the CC2531. But it especially occurs with the latest zigbee binding. Maybe i also have to change to an ember based device. I already was thinking about this.