Ready to use OpenHab hardware box?

I was surprised to see a ready-to-use Openhab 3.0 box with decent specs. Has anyone heard about it or tried it? Its name is DSGW-210-OpenHAB, see https://www.dusuniot.com/iot-app-gateway/openhab-home-automation-gateway
The company Dusun is Chinese based. 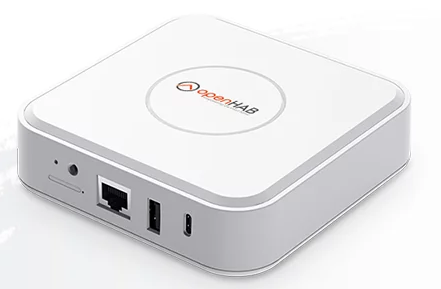 I have no clue about the price, but looking at the specs (EMMC and modem), it should be way more expensive than a Raspberry Pi 4 with a Zigbee or Zwave modem …

@Kai (and other maintainers/founders) ,would you ever believed this when you started al this (how many years ago)?

Given that the zwave binding doesn’t support Zwave 700 I would be a little cautious about believing these specs. They might have thrown a 700 controller on there and as far as OH integration

As @Chris and others discuss in this thread, there seems to be no documentation and therefore no short time solution for supporting Zwave 700 type controllers: ZWave 700 - Support? - #39 by Bruce_Osborne

I’ll ask the manufacturer about his point of view and post anything worth mentioning in this thread.

It appears somebody is trying to mimic the hardware available by the Home Assistant developers.Did they get permission before using the OH logo & name?

I recently opened a thread to judge interest in this being developed for OH but there was ot enough support for me to pursue it.

I currently recommend avoiding the controllers though due to a firmware bug that causes network issues. Silicon Labs, who created the standard, are working to find a solution. You can find a LOT more details in this GitHub issue. Many users are downgrading to a 500 Series controller while we wait for a solution,

It seems that **700-series sticks** (including the currently latest firmware 7.1…7) have some problems which mostly appear on networks that: * are relatively busy (lots of unsolicited reports like motion sensor, power meters) * are large and/or * contain some battery-powered devices When lots of reports reach the controller in a short time, the 700-series sticks are not able to send any message. It looks like the stick is somehow blocked and simply doesn’t send anything, maybe not even the protocol level acknowledgements for receiving the messages, causing end nodes to repeat their messages over and over, making the situation even worse. ### We're working with Silabs to get to the bottom of this. Please don't open any further issues. **If you want to help express the severity of this issue, please email Silabs and/or your stick manufacturer to let them know you are having zwave network problems so they are aware how many users this affects** --- We believe the following symptoms are all caused by this: - Huge delays (up to 60 seconds) when sending messages - Failure to send anything (`TransmitStatus: Fail`) - Floods of incoming reports that are transmitted over and over - Incorrect neighbor information (e.g. controller doesn't list some/any nodes as neighbors, etc.) - Failure to heal the network or individual nodes, especially in busy situations --- Additional background info: https://forums.homeseer.com/forum/homeseer-products-services/homeseer-z-wave-products/smartstick/1483440-does-anyone-have-a-solid-working-g3-system-at-this-time/page4#post1510687 --- **A workaround** until this is fixed is **migrating back to a 500 series stick**, using the migration tool 700<->500 series. Description: https://github.com/zwave-js/node-zwave-js/issues/3906#issuecomment-997484466

It look like a nice box. However, the way they promote it seems like a trademark violation(?). I don’t think it’s allowed to use the openHAB logo that way. At least they could have mentioned the trademark or provide some information about this. But even than I don’t think they are allowed to promote it like this:

Where can I find trademark policy and official logos? Press&Media

Correct, the foundation owns the logo and we are still in the process of registering it as a trademark, so that we can provide a re-use policy afterwards. For the time being, do an individual request to info@openhabfoundation.org and we can check how to best proceed. This is the part that only considers the “technical artwork”. But also note that Wikipedia writes: " This work includes material that may be protected as a trademark in some jurisdictions. If you want to use it, you have to en…

Yes, I would say so. They definitely didn’t reach out to us.
They also seem to have copied have of our website, if you scroll down on their page.

But as they are based in China, there’s probably little that can be done. I’m pretty sure they didn’t ask Amazon for permission on this either.

I’m pretty sure they didn’t ask Amazon for permission on this either.

Or any of the other orgs whose logos they’ve slapped onto the same box.

But as they are based in China, there’s probably little that can be done.

Agreed. It’s the flipside of Chinese manufacturers “cloning” the designs of other products and selling them on Alibaba. The only way to do anything about it would be for consumers to resist the siren call of lower prices (and quality).

The manufacturer claims to have it working. This is a quote from an email:

zwave700 and openhab are not very compatible originally.
Our engineer team built a plugin to solve this problem so don’t worry about this problems.

Being very curious, I asked for a sample.

Especially since, at least until very recently, the Silicon Labs firmware of the 700 Series controllers had a bug where they would lock up a busy network, It appears to me some 700 series devices still have bugs spamming the network.