The smaller the better…

Chacon 54781 seems popular with Domoticz Rfxcom users… I don’t know about it in Openhab (I setup my first domotics platform with Openhab and a couple of Oregon Scientific temperature sensors literally yesterday) but I guess that it is a lead worth following - if I understand well, it should be using the AC protocol.

So, thanks to SiLeX’s nice explanations, I got my Rfxcom to receive notifications from my Chacon DiO 54781 433Mhz door sensor with the AC protocol - it works !

I believe it doesn’t matter much - it works anyway…

Here is how it looks like in the events.log:

If you remove (unlink) the items with the contact type, then they won’t appear in the logs anymore. You don’t need both of them anyways. Simply click the circle in the thing config and remove the item.

In my Screenshot I already removed all links: 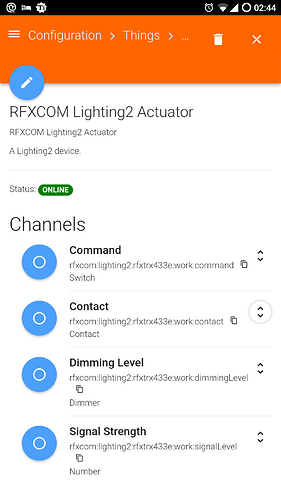 I’ve got some RFXCOM sensors to test now. What I noticed is that with a single door/window sensor, the ID keeps changing and it’s always added to the inbox again:

How do I handle this?

Be sure to only enable the protocols you really need in the RFXCOM. Also you may want to use the highest possible protocol. Higher protocols (higher = based on another protocol but with extra features) usually ensure that device IDs don’t change.

For example, the HomeEasy EU protocol is based on the Lighting4 protocol. Using Lighting4 to receive the HomeEasy Switches works fine, but the Commands are unknown and the IDs sometimes changes because of radio frequence fluctuation. Using the HomeEasy EU Protocol for the same switches shows sane ON/OFF commands and a fixed device ID as well as de-duplication (the HomeEasy EU Switches repeat the same message 7 times).

Long story short: Maybe try some other protocols. If all that won’t work, you can also bind both Thing Channels to your same Item or create a Proxy Item Rule.

Thanks for the hint, that’s a good idea!
I’ve tried it but unfortunately I only get the Lighting5 entry with 2 things - I will use the proxy items instead I guess.

General question: How do you guys see the security issue with all these 433mhz devices?
They are basically not protected, so theoretically it would be pretty easy for someone to tell if my backyard door is open or not …

General question: How do you guys see the security issue with all these 433mhz devices?

They are basically not protected, so theoretically it would be pretty easy for someone to tell if my backyard door is open or not …

When I first started playing with Openhab and RFXCOM and my three temperature sensors, the system kept discovering more of the same model - I cursed them, thinking that there was some unstable identifiers… And then I found stuff that I did not own - and understood that I was discovering my neighbour’s stuff… Among other things, I could read his electrical consumption, instantaneous and historical…

Your only protection is that the broadcast is local and that an attacker won’t know whose apartment the device belongs to… Unless you live in an isolated house.

The door device is slightly less concerning than the constantly broadcasting sensors, because they only reveal themself during door actuation.